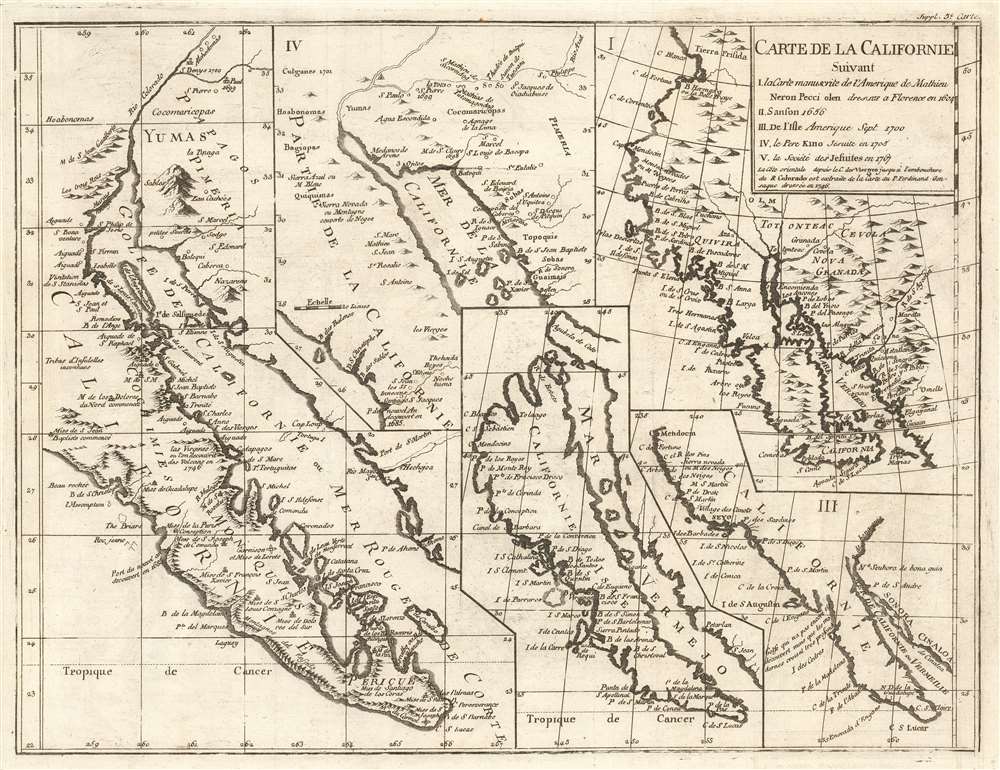 The California-as-an-island Myth At A Glance

This is a rare and important engraving combining five seminal maps of California on one sheet. European understanding of the region’s geography was convoluted and changed many times over the course of more than a century. This map, engraved by the important French cartographer Robert De Vaugondy for the 1772 edition of the Denis Diderot (1713-84) Encyclopedie, traces the gradual clarification of the geography of California through five key stages in the mapping of the region. It opens with the work of Italian cartographer Matheau Neron Pecci (1604) which correctly presumed that the main body of California extended southward into a peninsula. The next map illustrated, by Nicolas Sanson in 1656, was among the most influential of the maps of the 17th century to propose an insular California. Map no. III, by Guillaume Delisle (1700), was one of the first maps produced by a prominent geographer to abandon the insular California. The fourth is the seminal Kino Map. This map, rendered by a Jesuit missionary c.1705, was the work that finally disproved the California Insular theory. Father Franz Kino walked this region between 1698 and 1701. The final map, produced by unnamed Jesuits c. 1767 is a more accurate depiction of the Baja California peninsula. These maps all predate the discoveries of Captain Cook's voyages and hence Diderot's work was as much speculative as historical in many respects - though the Jesuit reports pertaining to California’s non-insularity were authoritative. A fine example of an essential work for all serious California collections.

This map is part of the 10 map series prepared by Vaugondy for the Supplement to Diderot's Encyclopedie, of which this is plate 5. This remarkable map series, exploring the mapping of North America and specifically the Northwest Passage was one of the first studies in comparative cartography.


Denis Diderot (October 5, 1713 - July 31, 1784) was a French Enlightenment era philosopher, publisher and writer. Diderot was born in the city of Langres, France and educated at the Lycée Louis le Grand where, in 1732, he earned a master of arts degree in philosophy. Diderot briefly considered careers in the clergy and in law, but in the end chose the more fiscally challenge course of a writer. Though well respected in philosophical circles Diderot was unable to obtain any of the government commissions that commonly supported his set and consequently spent much of his life in deep poverty. He is best known for his role in editing and producing the Encyclopédie . The Encyclopédie was one of the most revolutionary and impressive works of its time. Initially commissioned as a translation of Ephraim Chambers' Cyclopaedia, or Universal Dictionary of Arts and Sciences, Diderot instead turned into a much larger and entirely new work of monumental depth and scope. Diderot's Encyclopédie was intended to lay bare before the common man the intellectual mysteries of science, art and philosophy. This revolutionary mission was strongly opposed by the powers of the time who considered a learned middle class it a threat to their authority. In the course of the Encyclopédie production Diderot was imprisoned twice and the work itself was officially banned. Nonetheless, publication continued in response to a demand exceeding 4000 subscribers. The Encyclopédie was finally published in 1772 in 27 volumes. Following the publication of the Encyclopédie Diderot grew in fame but not in wealth. When the time came to dower his only surviving daughter, Angelique, Diderot could find no recourse save to sell his treasured library. In a move of largess, Catherine the II Russia sent an emissary to purchased the entire library on the condition that Diderot retain it in his possession and act as her "librarian" until she required it. When Diderot died of gastro-intestinal problems 1784, his heirs promptly sent his vast library to Catherine II who had it deposited at the Russian National Library, where it resides to this day.