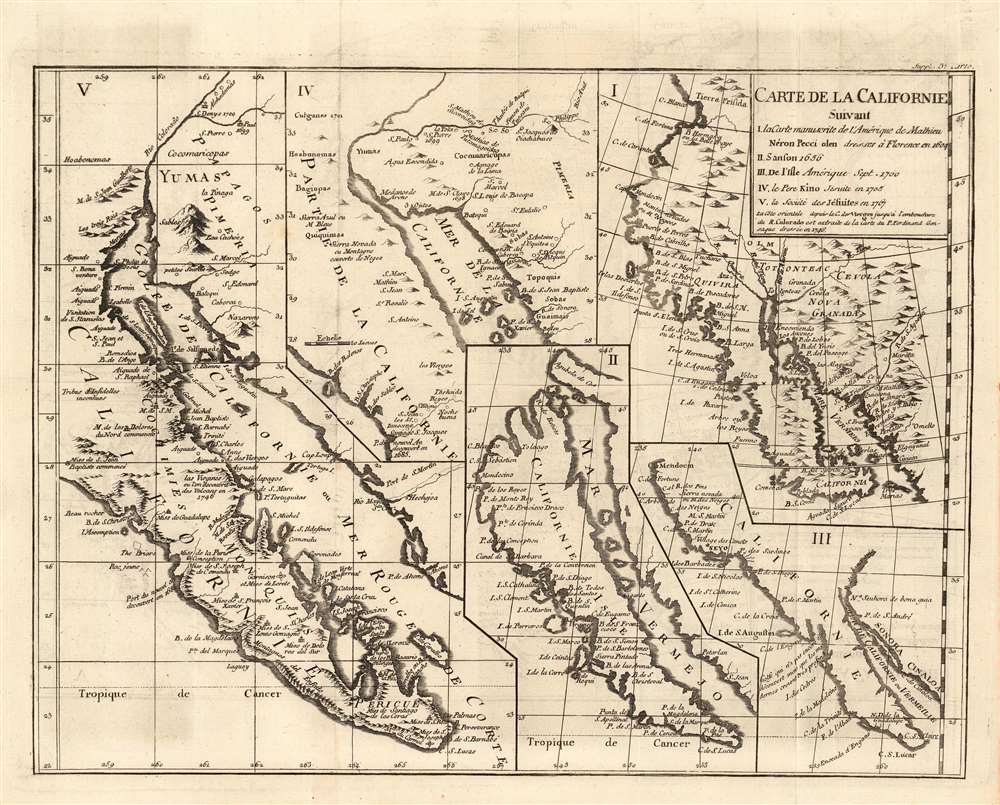 The California-as-an-island Myth At A Glance

This is a scarce and important engraving combining five seminal maps of California on one sheet. European understanding of the region’s geography was convoluted and changed many times over the course of more than a century. This map, engraved by the important French cartographer Robert De Vaugondy for the 1772 edition of the Denis Diderot (1713-84) Encyclopedie, traces the gradual clarification of the geography of California through five key stages in the mapping of the region. It opens with the work of Italian cartographer Matheau Neron Pecci (1604) which correctly presumed that the main body of California extended southward into a peninsula. The next map illustrated, by Nicolas Sanson in 1656, was among the most influential of the maps of the 17th century to propose an insular California. Map no. III, by Guillaume Delisle (1700), was one of the first maps produced by a prominent geographer to abandon the insular California. The fourth is the seminal Kino Map. This map, rendered by a Jesuit missionary c.1705, was the work that finally disproved the California Insular theory. Father Franz Kino walked this region between 1698 and 1701. The final map, produced by unnamed Jesuits c. 1767 is a more accurate depiction of the Baja California peninsula. These maps all predate the discoveries of Captain Cook's voyages and hence Diderot's work was as much speculative as historical in many respects - though the Jesuit reports pertaining to California’s non-insularity were authoritative. A fine example of an essential work for all serious California collections.

This map is part of the 10 map series prepared by Vaugondy for the Supplement to Diderot's Encyclopedie, of which this is plate 5. This remarkable map series, exploring the mapping of North America and specifically the Northwest Passage was one of the first studies in comparative cartography.

Tooley, R. V., Landmarks of Mapmaking; an Illustrated Survey of Maps and Mapmakers, p.215. Tooley, R.V., The Mapping of America, p. 134, #100. McLaughlin, G., The Mapping of California as an Island: An Illustrated Checklist, #241. Fite, D. E., and Freeman, A., A Book of Old Maps, Delineating American history from the Earliest Days down to the Close of the Revolutionary War, #52. Heckrotte & Sweetkind #15. Wheat, C., The Mapping of the Transmississippi West, 1540-1861, 160. Pedley, Mary Sponberg, Bel et Utile: The Work of the Robert de Vaugondy Family of Mapmakers. 474. Leighly, John, California as an Island; an Illustrated Essay, 177. Schwartz, Seymour I. and Ehrenberg, Ralph E., The Mapping of America, p. 136. Wagner, Henry R., The Cartography of the Northwest Coast of America to the Year 1800, Vol II, 637.
Looking for a high-resolution scan of this?