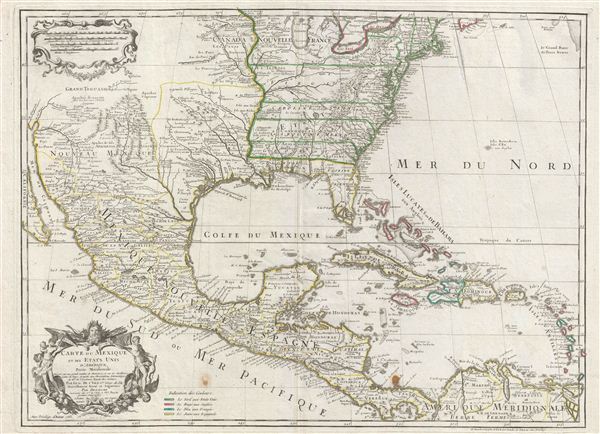 The only edition of this landmark map to include the United States.

This is the 1783 Dezauche issue of Phillipe Buache and Guillaume D L'Isle's important map of North America and the West Indies. The map covers the United States, Mexico, New Mexico, Central America and the West Indies or Antilles. De L'Isle first issued this map in 1703. At the time it was by far the most sophisticated map of the region yet produced, an achievement that the map historian Carl Wheat considers 'a towering landmark along the path of Western cartographic development'. This was the first map to accurately denote the course of the Mississippi River, accurately map the Great Lakes, and included numerous modifications from the explorations of La Salle, Bienville, and D'Iberville.

At the close of the American Revolutionary War, in 1783, Dezauche, De L'Isle's successor, redrew the classic 1703 map to include the newly formed United States and the 1763 Spanish occupation of Louisiana, as well as important updates relating to new explorations in Florida, the Appellation Mountains, the Mississippi Valley, and the greater southwest.

The map illustrates the political state of the continent following the 1783 Treaty of Paris, which formally ended the American Revolutionary War. The fledgling United States are configured roughly in accordance with the original British colonial charters, however, have their western boundaries set at the Mississippi River. Pennsylvania extends westward to include parts of New France that were ceded to the United States following the war. New York's borders follow roughly the borders of today – except in De L'Isle's map it includes New Jersey. To the south and west of the United States, Spain dominates, France having ceded control of Louisiana to Spain in 1763. even so we can see the political future of the continent taking shape. An outline of the region that would soon become Texas is clearly visible and distinct from neighboring Nouveau Mexique.

In New Mexico itself the missions along the Rio Del Norte, including Taos and Santa Fe are noted. Beyond the narrow valley attached to the Rio de Norte, however, the region is only tenuously mapped. The mythical Kingdoms of Gold, Quivara and Teguayo are noted just under the title cartouche. The empire of Gran Teguayo appears in the unmapped region to the northwest of Santa Fe. Teguayo was identified as one of the Kingdoms of Gold presumed to be found in the unexplored American west. The name Teguayo first appears in the Benevides Memorial, where it is described as a kingdom of great wealth to rival Quivara, another mythical kingdom just north of Taos. The idea was later popularized in europe by the nefarious Spaniard and deposed governor of New Mexico, the Count of Penalosa, who imagining himself a later day Pizzaro, promoted the Teguayo legend to the royalty of europe. Originally Teguayo was said to lie west of the Mississippi and north of the Gulf of Mexico, but for some reason, De L'Isle situates it further to the west.

This map was published in J. Dezauche's 1789 reissue of G. De L'Isle and P. Buache's Atlas Geographique et Universel. It is both the last edition of this important map, coming some 80 years after its original publication, and the first and only edition to include the United States.