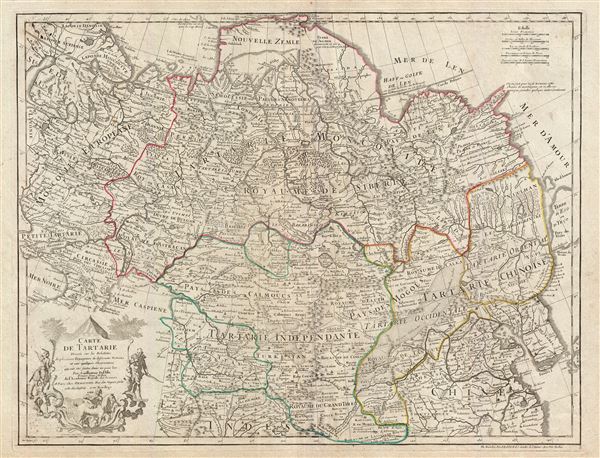 A fascinating 1766 Guillaume Delisle map of Tartary comprising most of Asian Russia, Siberia, Mongolia, Korea, northern China, and Independent Tartary. The map covers the vast expanse of northern Asia from the Black Sea and Gulf of Finland eastward as far as Yeso (Hokkaido), Korea, and China. It extends northwards beyond Nova Zembla and south to include parts of the Caspian Sea, Tibet, the Yangtze Valley, and parts of northern India and modern day Afghanistan. De L'Isle first issued this map in 1706, the present example however exhibits few if any updates (other than the date) and may be assumed to have come from the same printing plate.

Like most maps of this period, De L'Isle derived his map of Asia from primarily from the 1692 work of Nicholas Witsen, though admittedly there are several updates. Witsen was the Mayor of Amsterdam and a powerful director of the Dutch East India Company (VOC). Witsen compiled countless report received from the VOC's many traders operating throughout Asia. He also corresponded extensively with Tsar Petr Alexeyevitch inspiring a new age of Russian cartography. The result was a seminal map and accompanying book entitled Noord en Oost Tartarye that became the definitive resource for the mapping of northeast Asia for the next century.

… Answers from the most Northern and North-East parts of the World. For I have maintained constant Correspondence in Moscow, Astracan, Georgia, Yspahan, Polonie, and Constantinople. I have had Letters every year from Pekin, the Chief City of China. I have gathered Volumes of Journals and Registers, which set forth the Names of Mountains, Rivers, Cityes and Towns, together with a vast number of Drafts made by my own order, which describe Territories that I have mentioned. Tis from this Fund, which has been gathering for so many years, and by comparing and adjusting all these Materials, and by persevering without intermission there in, that the Map (of Tartary) is made up…

However, Delisle is in no way exclusive in his use of Witsen's work. Many elements of the map are the result his own judicious speculations. Nova Zemble (Nouvelle Zemle), for example, is here rendered as a Peninsula. A strange chain of mountains also extends from the northeastern part of the Continent. Where Witsen notes that it 'has no end,' Delisle makes clear that it does not communicate with America. Hokkaido is mapped speculative as Terre d'Eso and the seas to the north, roughly corresponding to the Sea of Okhotsk, is here identify as the Mer d'Amour. There is also an Ille D'Amour.

Published in the Dezauche 1789 reissue of Delisle's 1731 Atlas de Geographie.