1747 Boitard Celestial Map of the Constellations of the Zodiac 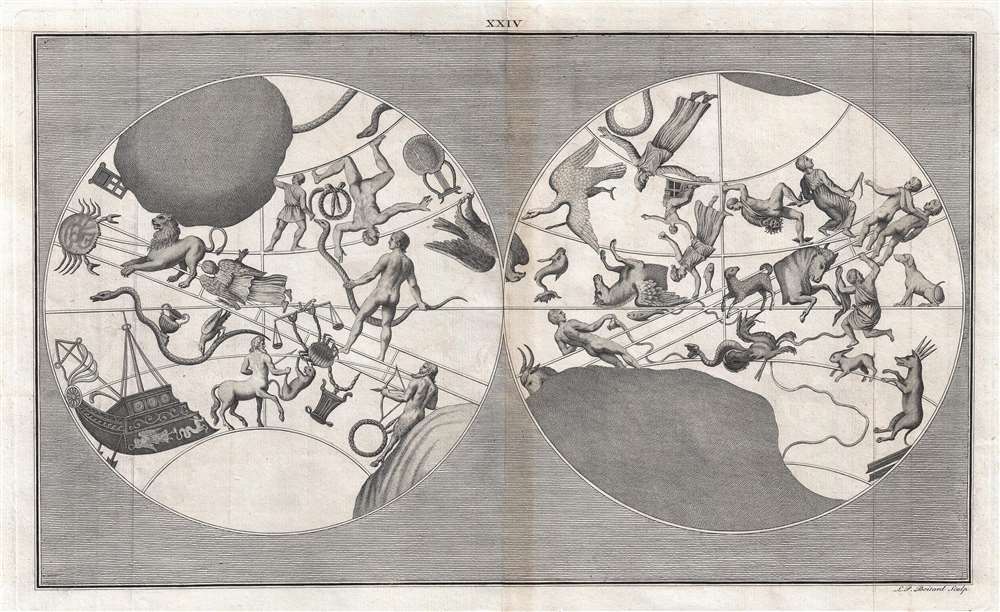 1747 Boitard Celestial Map of the Constellations of the Zodiac

A highly unusual 1747 celestial chart drawn by Louis-Philippe Boitard and printed for Joseph Spence's Polymetis. This double hemisphere celestial is unique in that the constellations, including the Zodiac, are beautifully engraved in figural form, but the map does not depict any actual stars. The lines of the meridian and the Zodiac are however present. There are two, blacked out zones, reflecting areas of the night sky blacked out at certain times. This is one of 41 plates, not all celestial, that Boitard prepared for the Polymetis. The Polymetis, which attempted to reconcile classical art and mythology, was published in 1747 by R. Dodsley. It was an influential work, treasured by such luminaries as Thomas Jefferson, among others.

Joseph Spence (April 28, 1699 – August 20, 1748) was an English historian, literary scholar, and anecdotist, who spent the majority of his life traveling throughout Europe. During these travels, he wrote many of his most distinguished pieces, and received inspiration for other literary works and lectures he went on to give at Oxford. Alexander Pope became a life-long friend to Spence and heavily influenced his work. Due in part to this friendship, Spence was elected the Oxford Chair of Poetry in 1728, and went on to become a professor of modern history at Oxford in 1742. After publishing Polymetis, Spence used his profits to fulfill his love of gardening, and he continued to produce literary works (both published and unpublished) until his death. Learn More...


Louis-Philippe Boitard (c. 1750 - 1758) was a French engraver active in London during the middle part of the 18th century. Boitarde was born in Paris and relocated to London with his father François Boitard (1670 – 1719), a baroque painter, as a young man. Boitard, like his father, mastered engraving under the tutelage of Raymond Lafage. His most notable work is the compilation and engraving of 41 plates in total for Joseph Spence's Polymetis. At the time of his death he was based in England. Learn More...