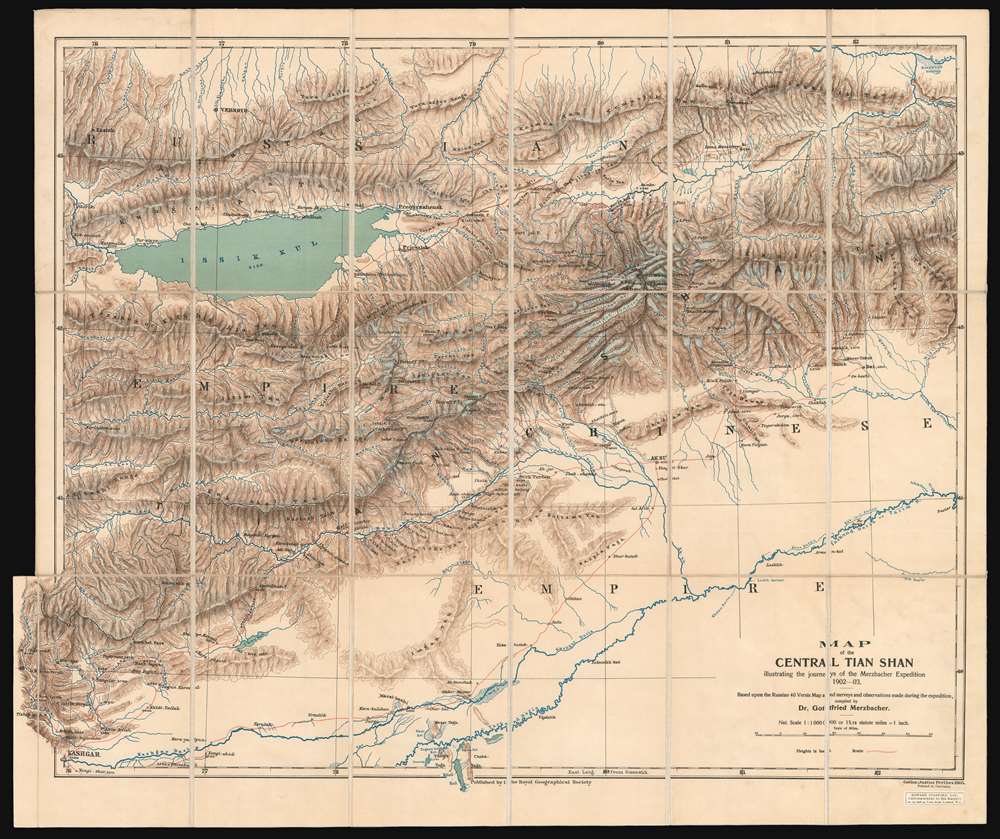 An extremely rare map of the Tian Shan Mountains and the first to accurately locate Khan Tengri.

This is an extremely rare 1905 Dr. Gottfried Merzbacher map of the central Tian Shan Mountains in modern-day western China and Kyrgyzstan. It is the first map to accurately locate Khan Tengri, a nearly 23,000-foot peak known but not mapped. The map depicts the region from Kashgar to the Shakh Yar River, and from the Kunges River to Khol Kol (Khol Lake). Red lines trace the Merzbacher expedition's peregrinations through the region over a period of two years, with their ultimate goal being determining an accurate location for Khan Tengri. Settlements, rivers, and lakes encountered along their routes are labeled, but detail becomes scarcer the farther away from territory physically explored by the expedition. During their two years in the region, Merzbacher and his associates collected a trove of data, most of which is not represented here due to the desire to quickly publish the map to accompany Merzbacher's book. Glaciers, some of which the team explored on foot, while others they simply observed, are illustrated throughout. Khan Tengri, the expedition's stated goal, is illustrated and labeled above and to the right of center and is surrounded by glaciers. Unfortunately, the label on this example is bisected by the linen fold line. Issyk-Kul (Issik Kul), an endorheic lake in eastern Kyrgyzstan that is the second largest saline lake in the world, is also illustrated and labeled.

Merzbacher's Comments About the Map

Merzbacher includes some comments concerning this map at the end of the book he published about the journey, stating that it was 'a sketch-map' and did not 'profess to give a complete and accurate representation of the physical features of the Central Tian-Shan'. He notes that hundreds of barometric observations taken during the expedition had not yet been collated when this map was being prepared, so altitudes are provided as round numbers only, 'which do not claim to be absolutely accurate'. He also comments on the names presented on the map, stating that he took 'the greatest pains to ascertain the true, current names of localities, and having visited most of them repeatedly and thoroughly, I think my nomenclature has a claim to authority.'

This map was compiled by Gottfried Merzbacher to accompany his book entitled The Central Tian-Shan Mountains 1902 - 1903 and was published in conjunction with the Royal Geographical Society by Justus Perthes in Germany and Edward Stanford in Britain. Only one example of the map is catalogued in OCLC and is part of the collection at the British Library. The book is well represented in institutional collections. However, both are extremely rare on the private market.

Gottfried Merzbacher (December 9, 1843 - April 14, 1926) was a German alpinist, explorer, and geographer. Born near Erlangen, Merzbacher was the son of Marcus Merzbacher, a Jewish fur trader. He left secondary school to learn his father's trade, and eventually trained in London, St. Petersburg, and Paris. He opened a fur shop in Munich in 1868, which, after twenty years and building a successful business, he sold to devote himself entirely to alpinism. After his retirement, Merzbacher went on extensive trips worldwide, investigating Persia, Ceylon (Sri Lanka), the Caucasus, and Kashmir. In 1902-03 he led an expedition into the Tian Shan Mountains where he discovered the ice reservoir on the Inyltschek glacier that has become known as the Merzbacher See. Learn More...

Very good. Dissected and mounted on linen in 19 panels.