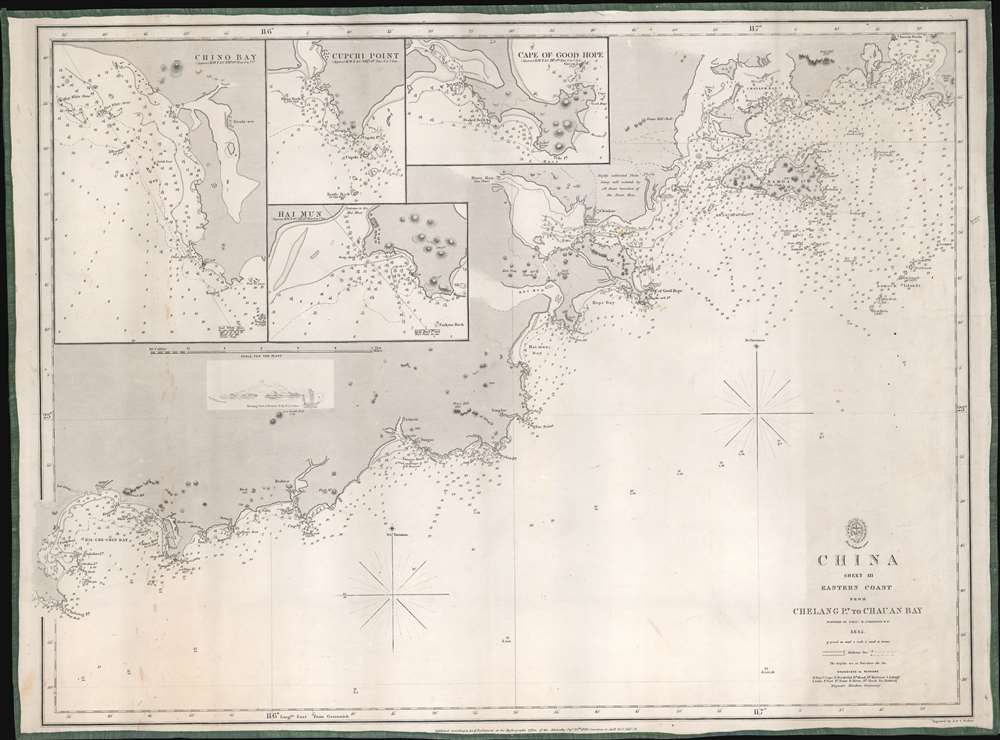 This is a rare 1863 British Admiralty nautical chart or maritime map by Sir Richard Collinson. The map covers the coast of China from Chelang Point (near Jieshi Bay) to Chauan Bay (Zhao'an Bay), the modern-day Guangdong coast just east of Hong Kong. It was published only a few years after the end of the Second Opium War (1856 - 1860) and the signing of the 1860 Convention of Peking - an event that led to an explosion of foreign trade with China. Countless depth soundings populate the map and provide mariners with a detailed understanding of these waters. The coastline is depicted in detail as well, with points, bays, capes, islands, and other features identified. Four insets occupy inland China and focus on Chino Bay, Cupchi Point, Hai Mun, and the Cape of Good Hope.

The Second Opium War (October 8, 1956 - October 24, 1860) followed the First Opium War (1839 - 1842), both pitting a British-French alliance against Qing China. Both wars resulted in Qing defeats. The Chinese capture of the British cargo vessel Arrow ignited the Second Opium War. Following the seizure of the Arrow, Britain destroyed a series of forts and bombarded Canton (Guangzhou). Over the ensuing four years, the war progressed through several phases and ended with the British and French occupying Beijing after handing the Chinese a devastating defeat. While in Beijing, British and French troops looted the Summer Palace and the Old Summer Palace before Lord Elgin of Britain, Russian envoy Count Ignatiev, and Baron Gros, a French diplomat decreed that the Summer Palaces would be burned. Lord Elgin advocated for the destruction of the Forbidden City as well, revenge for the mistreatment of Western prisoners (almost twenty were tortured and murdered, including two British envoys and a journalist for The Times). However, Ignatiev, Gros convinced Elgin that burning the Summer Palaces was sufficient and less objectionable.

The Convention of Peking, which ended the Second Opium War comprised three distinct treaties. Each Western power (Great Britain, France, and the Russian Empire) demanded separate treaties with different stipulations. Britain demanded the concession of Kowloon and the legalization of the opium trade, while France secured freedom of religion in China. The Russian Empire (who had not actually been a belligerent in the war) gained parts of Outer Manchuria.

This map was created from surveys conducted by Richard Collinson and published by the British Admiralty first published in 1849. It represents sheet III of a numbered set covering the China coast (Sheet II is Hong Kong). Several editions followed, including an edition published in 1863, of which the present example is extant. The only other known example of this chart is part of the collection at the National Maritime Museum in Greenwich, London, and is dated to 1849 instead of 1863.

National Maritime Museum, Greenwich, London G271:8/4.
Looking for a high-resolution scan of this?