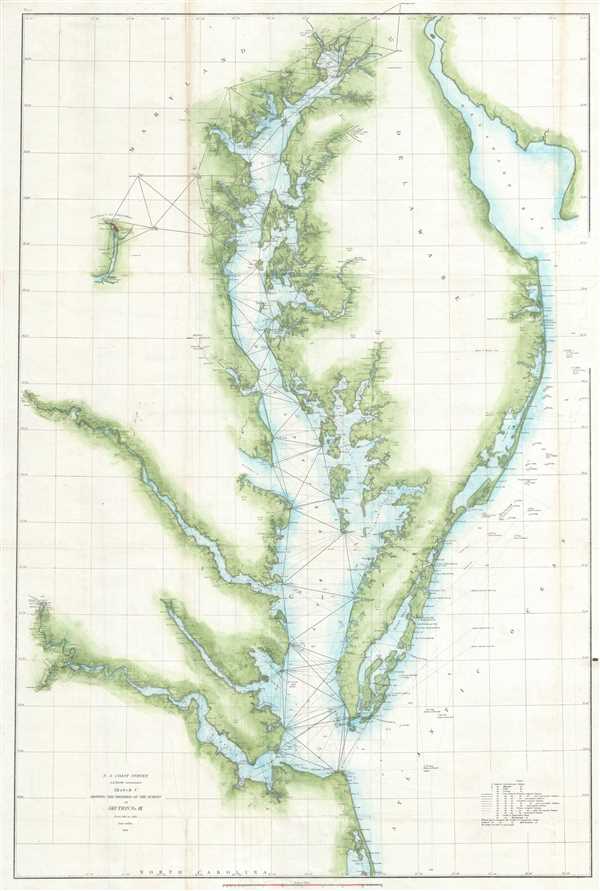 Incredible coastal detail - including the James, York, and Rappahannock Rivers.

This is an 1856 U.S. Coast Survey nautical chart or maritime map of Chesapeake Bay and Delaware Bay. The map depicts the region from Susquehanna, Maryland to the northern Outer Banks in North Carolina and from Richmond and Petersburg, Virginia to the Atlantic Ocean. Highly detailed, myriad cities and towns are labeled throughout, along with rivers, inlets, and bays. Various charts illustrating more specific parts of the region are marked on the map using dotted lines forming boxes, and the corresponding chart number and publication date are given. Extensive triangulation surveys were conducted the length of Chesapeake Bay and are illustrated here. Hampton Roads, Virginia is labeled, along with the James, York, and Rappahannock Rivers, which were all extensively surveyed.

Bache, A. D., Report of the Superintendent of the United States Coast Survey, (Washington) 1856.

Very good. Backed on archival tissue for stability. Light wear along original fold lines. Blank on verso.
Looking for a high-resolution scan of this?