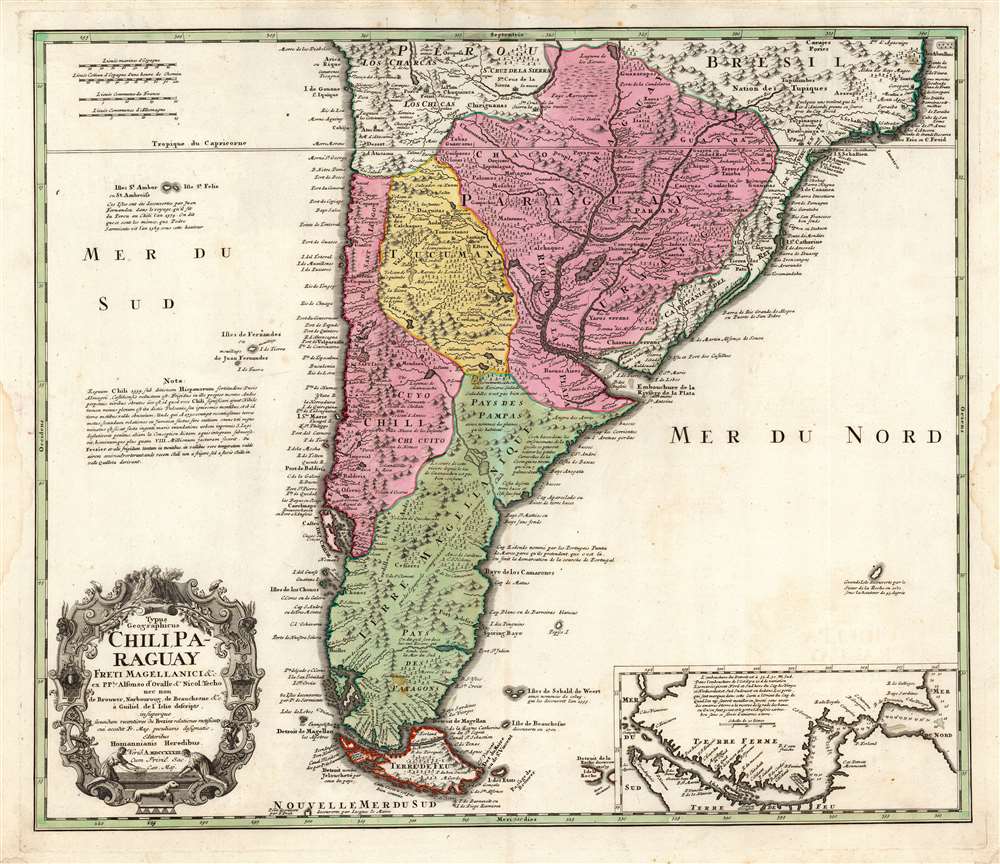 This is an early example of the 1733 Homann Heirs map of southern South America, in a rare first state example. It covers roughly from 18 degrees south latitude south to Tierra del Fuego, and includes the modern-day nations of Paraguay, Chile, Uruguay, and Argentina, along with the southern portions of Brazil and Bolivia. The map renders the entire region in extraordinary detail offering both topographical and political information with forest and mountains beautifully rendered in profile.

The Homann firm drew on state-of-the art maps, mostly the 1703 map of Guillaume De L’Isle which, itself derived from the firsthand account of Alfonse d'Ovalle, and additional reports from de Brouwer, Narborough and, de Beauchesne. (Their copy is faithful to the extent of preserving much of De l'Isle's French commentary.) The publishers also credited Amédée-François Frézier for his reports of Peru and Chile, but it is not apparent that his contribution goes beyond the inset chart at the lower right detailing the Strait of Magellan. Between De l'Isle's cautious mapping and the more recent information of Frézier, this map presents a broadly accurate and detailed mapping of both the east and west coasts. The Rio de la Plata is presented to suggest relatively easy navigation along it and its tributaries, as well as the relative narrowness of the continent and accessibility of the Pampas.

One of the interesting speculations is a reitreation of De l'Isle's\ depiction of the Santa Cruz River, or the 'Rio St. Julien', nearly connecting with the Rio de la Campana coming from the Pacific, thus connecting the Atlantic to the South Seas via an easy overland river route. The idea of a river route crossing Patagonia caught the European imagination in the early 18th Century. The writer Daniel Defoe proposes a similar route further north in his book A New Voyage and such concepts appeared in several maps of the period including Herman Moll's important map of the South Sea Company. Of course, the Andes were in fact an indomitable barrier and short of the treacherous Strait of Magellan itself, no such water route existed.

Some other interesting elements of this map appear far from the mainland in the surrounding seas. The Falklands are depicted in an embryonic form as identified by Captain La Roche in 1675. Just above the inset, another island appears, supposedly discovered by La Roche in 1675, and is mostly likely a mis-mapping of South Georgia Island.

This map was engraved in 1733 for inclusion in various Homann atlases, such as the Grosser Atlas. All examples of this map bear this date in Roman numerals. At a later date, the chart of the Strait of Magellan in the lower right was replaced by Frézier's plan of the city of Santiago. The title cartouche was also altered to indicate the change. Virtually all examples are cataloged with the 1733 dating, but this is not credible. Twenty-two separate examples of this latter state are cataloged in OCLC, and in this state the map is ubiquitous on the market. Perhaps ten with the Strait of Magellan chart appear in institutional collections, and it appears on the market much less frequently.


Alonso de Ovalle Pastene (July 27, 1603 - May 11, 1651) was a Chilean born historian, educator and Jesuit, known for producing Historia relacion del Reyno de Chile, the first history of Chile. He was born in Santiago, Chile, son of Francisco Rodríguez del Manzano Ovalle and María Pastene Lantadilla Astudillo. Alonso lived and worked for most of his life in Chile, but resided in Rome from 1642 to 1650, where he had his work published. It included arguably the most important early map of Chile, the first printed map of the region produced by someone who actually lived there. He returned to South America, dying in Lima in 1651. Learn More...


Amédée-François Frézier (1682 - October 26, 1773) was a French military engineer, mathematician, spy, and explorer. He was born in Savoy to a professor and lawyer. He was sent to be educated in Paris, where he studied science and theology, and wrote his thesis on Astronomy and Navigation. He went on to study art and architecture in Italy with particular attention to fortifications. On his return to France in 1700 he was commissioned to the military: by 1712 he had risen to a lieutenant-colonelcy of Army Intelligence, and was sent to South America - in the guise of a merchant captain - to study defense fortifications, ports, and the coastal charts of Spanish Colonial Chile and Peru. The journey would result in the production of more than a dozen maps. In addition to his espionage work, he reported on the flora and fauna and produce of the regions he visited - bringing back to Europe specimens of native American strawberry, his namesake fruit. He would travel again in 1719, assigned as Engineer-in-Chief to Santo Domingo and tasked with the fortification of the colony; to this end he produced a map of the island and a plan of Santo Domingo. He returned to Europe, was rewarded for his labors, and went on to design fortifications in Philippsburg and Landau. In 1739, he was made Director of Fortifications for Brittany. Learn More...

Very good. Recornered in lower left and right, not impacting printed image. One small area of restoration (impacting the 'P' in Patagoinia, else a most attractive example with a sharp strike and rich original color.