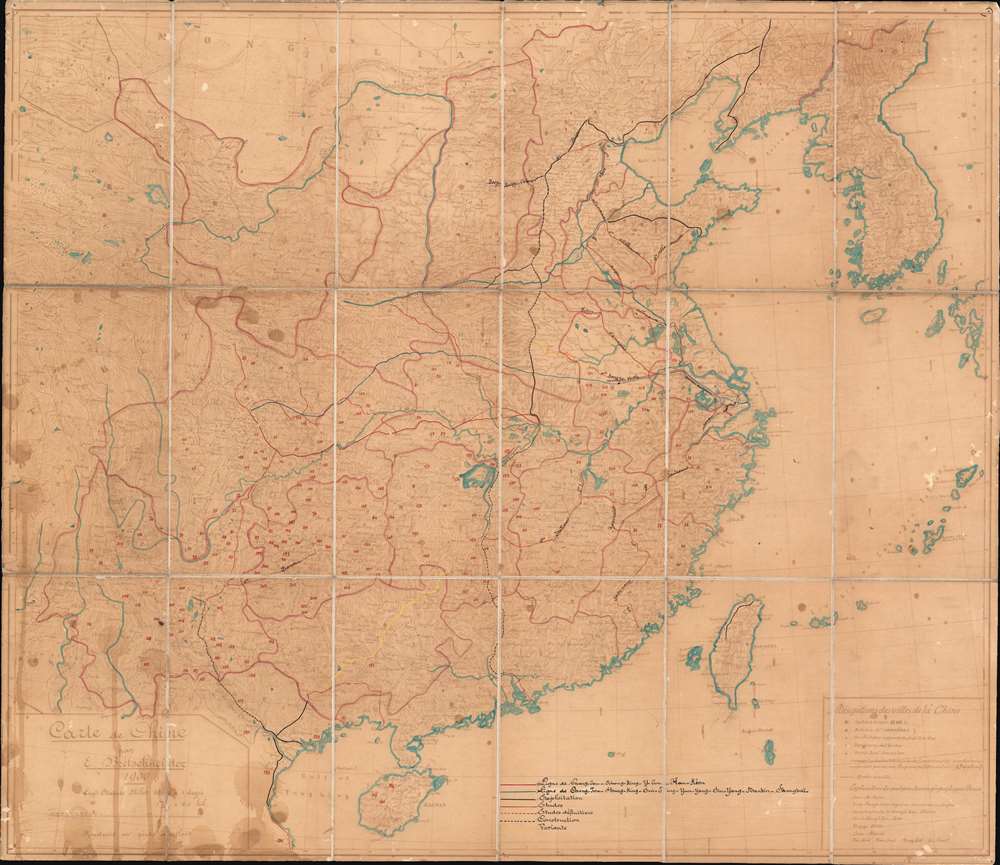 A most intriguing discovery capturing the pivotal historical moment when China embraced the railroad, in the processing sacrificing much of its sovereignty to vast network of railroad concessions and foreign interests. This is a 1900 ferro-gallic transfer of Emilii Vasil'evich Bretschneider's original manuscript map of China, accompanied by extensive manuscript annotation in the author's hand regarding the development of China's railroad system in the late 19th century.

The railroads came late to China. Although today China operates the world's largest railroad network, in the 19th century the Qing were slow to embrace the 'iron horse', the Emperor citing its annoying clamor and concerns over disrupting the feng shui. The Qing's humiliating loss to the more technologically advanced Japan in the First Sino-Japanese War (1894 - 1895) forced a reconsideration of this policy. Between 1895 and 1900, Qing administrators worked with various foreign banks, private companies, and engineers to plan a bold national railway system financed through expansive nation-spanning concessions.

Although the Qing were criticized for giving up the empire to foreign interests, they were actually extremely astute in balancing rival European, American, and Japanese powers against one other. Where one foreign government had too much power, another would be brought in as a counterbalance. For example, in 1896, the Lugouqiao-Hankou Line was granted to a Belgian consortium - latecomers to the China colonial game - to counterbalance the French, German, and Russian influence. Thus, a tenuously balanced system was created. German companies controlled Shandong, Russia dominated Manchuria as far south as Port Arthur, Belgians controlled the important Beijing (Lugouqiao)-Hankou line, British interests developed the Yangtze Valley, the Japanese were active in Fujian, American controlled lines ran south of the Yangtze, and the French developed the south, where lines connected to French Indochina.

The annotations to this map are most curious and provide deep insight into the early development of the Chinese railroad system as of 1900. Railroad lines are marked according to their construction / operational status and do not always represent actual railroads, rather, they are railroad concessions to foreign powers granted by the Qing.

Understanding the Map Itself

Thus far our focus has been on the manuscript content and updates, but we now bring our attention to the underlying map. Bretschneider originally drew this map to complement his botanical and sinological observations in 1896. It was subsequently engraved and published by the heirs of Alexey Afinogenovich Ilyin in St. Petersburg. Bretschneider returned to the map, revising and updating it in 1900. We are not aware if any of his original manuscripts have survived, but this map is notable as a Ferro-Gallic transfer of the manuscript original - likely made quickly in China from Bretschneider's draft manuscript to serve as a base-map for the added resource and railroad annotations. Comparing the text on the map to the additional manuscript content, it is clear that all are in the same professional hand - certainly Bretschneider's own.

A close study reveals a series of 206 numbered circles. Both the circles and the numbering were present on the original manuscript before this Ferro-Gallic print was made, but here the numbers have been inked over in red. It is not clear what these represent, as they do not seem to correlate with railroad development.

Similar manuscript annotations appear on an 1896 printed edition of Bretschneider's map that surfaced about 10 years ago and is now in a private collection. There, the annotation is added in a similar hand. It too highlights railroads, but also features a complement of circles. In that example, the circles clearly indicate mineral resources: coal, diamonds, mercury, oil, etc. Here the circles are stylistically similar, but they do not correlate 1-to-1. Nonetheless, they may represent something similar.

Ferro-Gallic printing, also called 'Iron Gall Print' is a photo-reproductive process developed in 1859 by Alphonse Louis Poitevin. The process became popular in the late 1880s when it was introduced commercially, particularly as it could be used to make fast copies of tracings and allowed for corrections to be made during the printing process. Moreover, copies could be made directly form originals without an intermediary negative process. Due to the chemicals used in this process, the background is never white, instead taking on a pale brown to lavender tint. Like most photo-reproductive processes of the period, ferro-gallic printing was useful only for short run printing, usually of less than 5 copies, and not practical for mass production. Moreover, due to the photoreactive nature of the print, and the low-quality field papers generally used, ferro-gallic prints rarely survive more than 30 years or so, making the early examples extremely scarce. The ferro-gallic process is similar to the Diazo Print or Whiteprint process, which replaced it in popularity in the early 20th century.

Emilii Vasil'evich Bretschneider compiled this map in 1896 to illustrate his research in to Chinese herbology. That map was engraved and printed in St. Petersburg by the Ilyin firm, heirs to the publishing empire of Alexey Afinogenovich Ilyin. Back in China, Bretschneider prepared an update in 1900, which was also printed in St. Petersburg by Ilyin. Examples of the Ilyin editions are extremely rare - but this s not that map. The present map is a ferro-gallic transfer from Bretschneider's original manuscript draft - not the 1900 published edition. It was likely made in China, and limitations inherent to the ferro-gallic process suggest that fewer than 5 could have been made. This, in addition to the added manuscript content, make this a unique piece.

Emilii Vasil'evich Bretschneider (Эмилий Васильевич Бретшнейдер; February 2, 1833 - May 12, 1901), commonly known by his francophone name Émile, was a Russian botanist, sinologist, medical doctor, and cartographer active in the second half of the 19th century. Bretschneider was Russian, but of German-Latvian descent. Bretschneider was bornin Bankaushof, today Benkavas muiža, Saldus novads, Latvia. He received a medical degree in Estonia from the University of Dorpat. From 1862 to 1865 he served as physician to the Russian delegation in Tehran. In the 1866 he was transferred to the same position at the Russian delegation in Beijing. There he became obsessed with Chinese language and culture, particularly as regards Chinese scientific and botanical knowledge, and became one of the foremost sinologists of his day. He published translations of numerous Chinse words, as well as studies on botany, Chinese history, Chinese-Arab relations, and a monograph on Fu Sang that expounded on the notion that the Chinese colonized America. He also established deep connections with the Chinese Imperial Court and the various expatriate communities, allowing him to issue several important maps of China - among the most accurate of the late Qing period. Bretschneider retired to St. Petersburg where he died in 1901. Learn More...

Good. Ferro-gallic transfer, w/manuscript. Some ferro-gallic fluid stains. Dissected and laid on linen. Stable.
Looking for a high-resolution scan of this?