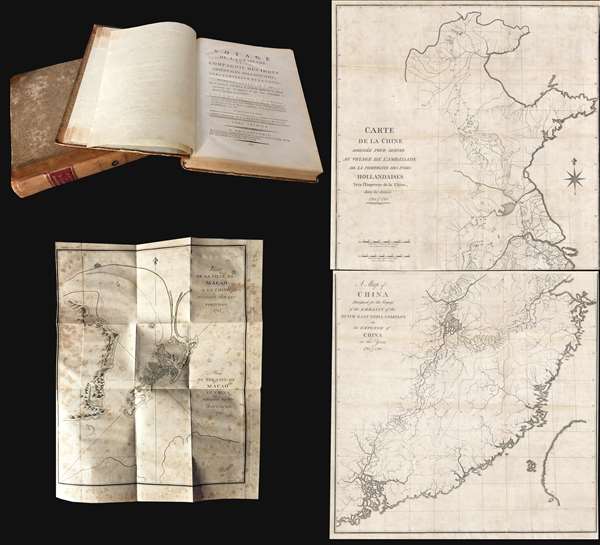 Rare first edition of 'one of the most valuable works on China, describing districts never before traversed by Europeans.' (Sabin)

This is a rare 1797/98 Andreas Everardus van Braam Houckgeest two-volume narrative of a VOC embassy to the court of the Qianlong Emperor, in China, and its accompanying maps. During this voyage, Houckgeest became the first American to meet a Chinese Emperor and visit Beijing (Peking). The two volumes describe the important 1794 - 1795 journey and are accompanied by multiple plates, a map of Macao, and one large, two-part, map of China.

The two-map set, and the map of Macao, represent the earliest American maps to focus on China. The set of maps are meant to be joined into a single large map of China covering from the Great wall of China, and Beijing to the Pearl River Delta in the vicinity of Guangzhou and modern-day Hong Kong. The lower map extends eastward to include the western half of Formosa or Taiwan. The set was laid (but not bound) into volume 1 of the narrative and although there is no indication that they were bound into the volume at an earlier date, the unusual fold metric on the plates suggest that they were once stored in a different manner. The stand-alone Macao map is bound into volume 2. The maps were engraved in Philadelphia by John Vallance, possibly the finest American engraver of his day, and are titled in both French and English. Throughout the engraving is impressive and and finely detailed, with the mission's route through China identified, as well as river systems, topography, and villages.

The accompanying volumes describe, nearly day-by-day, the important Titsingh Mission to the Qianlong Court. Houckgeest, who had become an American citizen in 1784, traveled to China in 1790 to take a leadership position at the Dutch East India Company factory in Guangzhou. There, learning of the failed 1793 English Maccartney Embassy to visit the Chinese Emperor, he convinced his VOC superiors that a similar Dutch voyage could avoid the English embassy's breach of protocol (failing to kowtow) and gain trade advantages. The embassy, led by Isaac Titsingh, arrived at Qianlong Court, then recessed at the Summer Palace (Yuangmingyuan), just in time for Chinese New Year. There, Houckgeest was presented to the emperor becoming the first American to enjoy that privilege. Apparently while kowtowing, Houckgeest's hat fell off, eliciting a burst of laughter from the emperor, and putting the embassy in the court's good graces for the reminder of the visit.

In addition to describing the voyage, the work offers detailed descriptions of 18th century Chinese life, including theater, chess, dress, and various cities. Also included in the volume are transcriptions of numerous documents relating to the origins of the embassy and its itinerary, among them Houckgeest's letters to VOC officers in Batavia as well as correspondence between the Chinese Emperor and the King of the Netherlands.

In addition, there are numerous engraved illustrations. The illustrations were the work of Philadelphia engravers A. P. Folie, John Vallance, and Joseph or Samuel Seymour, who engraved the plates from drawings brought back by Houckgeest. The images include the large (42in x 21in) two-part map of China (Wheat and Brun #892) and a large (19in x 14.5in) plan of Macao (#896). Volume I also calls for a plan of Peking (#893), but according to Wheat and Brun 'no such map has thus far been discovered.'

According to Landwehr, the full complement of illustrations is 14, including 12 plates plus the two maps). Our copy of the Voyage has 12 only, lacking Landwehr #3 (an interior view) and 7 (full-length portraits of four Chinese figures). There is however no sign that these plates were ever bound in to our set, and a review of sales records and institutional holdings indicates that the other known sets show much variation in the number of illustrations. For example, we have located four sales records for other copies (Parke Bernet, 1939; Nebenzahl, 1961; Sotheby's, 1965; and Christies, 2000), and of these only Nebenzahl's had all 14. Likewise, while the American Antiquarian Society has the full complement, the Library of Congress example contains only 8 plates and the maps. A plausible explanation for the varying collations is Houckgeest and Moreau de Saint-Mery's use of three different engravers, which likely resulted in the illustrations being delivered at different times and bound into sets only as they became available.

The first edition of this work, as here, is exceptionally rare. There are no sales records since 1939. The OCLC indicates about 15 institutional examples. Pirated editions, mostly issued in London and Paris, do occasionally appear on the market. According to one story, a London-bound shipment of 500 copies of Houckgeest's work were seized by a French privateer in 1797. These were then taken to Paris where they were used to produce pirated editions.

Andreas Everardus van Braam Houckgeest (November 1, 1739 - July 8, 1801) was a Dutch-American merchant who is known for his participation in the Titsingh Mission to China. Houckgeest was born in Werkhoven, Utrecht. He joined the Dutch Navy as a midshipman in 1757 but shortly afterwards transitioned to a Dutch East India Company (VOC) ship bound for China. Houckgeest arrived in China in 1758 and spent 8 years trading on behalf of the VOC, mostly in Guangzhou and Macau. Returning from China in 1783, by then a wealthy man, Houckgeest settled in a country-seat near Zutphen, Gelderland. This situation was short-lived as Houckgeest had a restless temperament. He was soon inspired by the political ideals of the American Revolution and determined to emigrate to the United States, ultimately settling in Charleston, South Carolina, where he attempted to establish himself as a rice planter and merchant. He became an American citizen in 1784. A few years later, in 1790, troubled by a family tragedy, Houckgeest once again found himself bound for China, where he planned to take a lead position at the Dutch factory in Guangzhou. Learning of the failed 1793 British Macartney Embassy (they refused the kowtow, thus mortally insulted the Qing Court) to the Beijing court of the Qianlong Emperor, Houckgeest convinced his VOC superiors to fund a similar mission. The VOC agreed with the idea and sent Houckgeest to Beijing under the command of Isaac Titsingh (1745-1812), then head of the Dutch trading mission in Dejima. Kowtowing (koutou), as tradition demands, the Dutch were welcome at the Qianlong court. They were further distinguished when Houckgeest's hat fell off during the kowtow, earning a laugh from the emperor. As Houckgeest was then an American citizen, he became the first American to meet the Emperor of China. Houckgeest and the rest of the Titsingh mission were notably last European diplomats to experience the mid-winter splendor of the Summer Palace (Yuangmingyuan) before it was destroyed in 1860 by Lord Elgin during the Second Opium War. Following the successful embassy, in March of 1795, Houckgeest boarded a ship from Guangzhou to Philadelphia, which arrived in 1796. He briefly settled in Bristol, near Washington D.C., where he wrote a memoire of the voyage to the Qianlong court, dedicating it to George Washington. In 1798 he returned to Europe, acquiring a small property in Amsterdam, where he died in July of 1801. Learn More...

Very good. Two volumes, 4to (10 ½ in h x 8 ½ in). lxxx,437 and xii,520pp. Vol. I with 7 engraved plates (of 9, lacking Landwehr # 3 and 7, but see below) and folding engraved map of China on two sheets laid in; vol. II with three engraved plates and large folding plan of Macao. Contemporary half calf, spines flat with simple gilt tooling, red morocco labels and oval black labels for volume numbers, slightly rubbed. Plates (notably plan and map) and second half of vol. II moderately foxed, else a very good set in original condition. Bookplate of German bibliophile Hans Dedi (1918-2016) on front pastedown of both volumes. Measurement and scale provided reference China map.