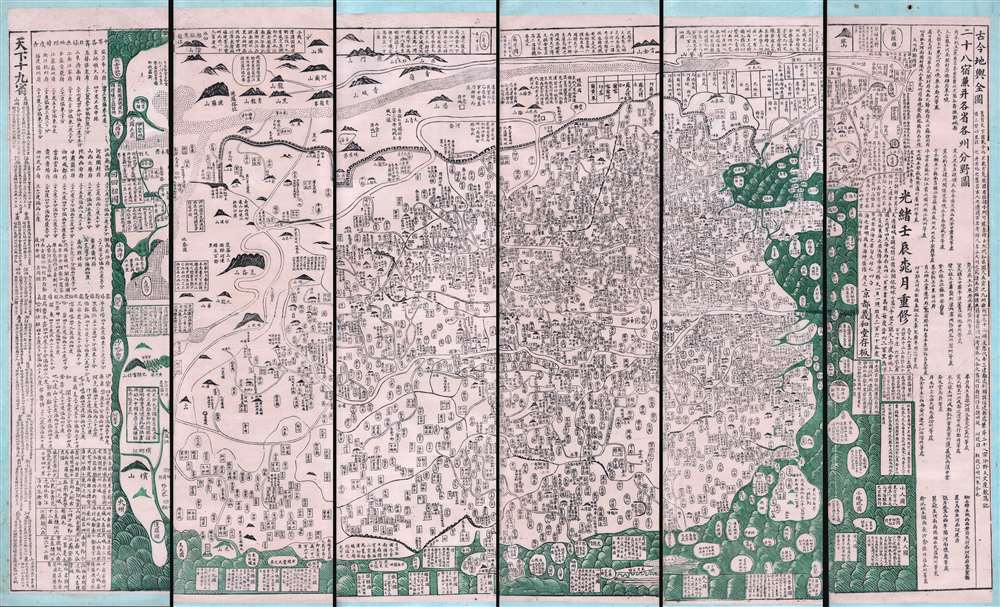 A rare and important discovery, this is Mingjie Liu's (刘明杰) (1857 - 1911) important 1892 (Guangxu 18) Qing Era xylographic (woodcut) map of China - the earliest known example of what is considered China's first commercial map and possibly the first Chinese comical map. The map was revolutionary when Liu created it, as this was neither an administrative map nor religious map. Instead, it was a commercially marketed folk piece, muban nianhua (木版年画) , created in Yangjiabu, Shandong, for traditional Chinese New Year festivals. Coverage extends to all of China, as well as marginal inclusions in the form of tenuous mappings of foreign places including European countries, Southeast Asia, India, and apocryphal destinations.

Cartographically, the map is loosely derived from the DaQing Wannian Yitong Tianxia Quantu / 大清万年一统天下全图, a map produced by Huang Qianren (黃千人, 1694–1771) in the late 18th century. That map, made for official Imperial use, is much grander and larger, but shares a similar coverage, iconography, geographical deportment, and style. Where the Huang Qianren map was made to administer an empire-wide tax system, the goal here was informational and possibly humorous. Liu maintains the iconographic code established by Huang but drops the essential map key. Instead, he incorporates extensive annotative text describing people and places peripheral to the Chinese Empire - in folklorish even humorous terms.

Some descriptions he draws from folklore and Chinese histories. Others are rooted in truth and include a variety of strange cultures, mythical islands, and anthropomorphic peoples, among them:Taiwan, or 'Terraced Bay' is named as such after Admiral Cheng Ho of the Ming court who first identified it as such in 1430. On the left-hand side of the map is a list of Chinese Provinces, their capitals, and their distance from Beijing based upon the speed of the horse, calculated in days, and the direction as positioned by degrees of the compass. To the far west, European countries, including England, Holland, and Russia, and the Atlantic Ocean are identified.

Rediscovery of the one Plate

In December of 2008, the rightmost of the 6 plate-panels for this exceptional map was rediscovered at Yangjiabu Woodcut Print Workshop (寒亭区杨家埠木版年画社), located in Yangjiabu Village, Hanting District, City of Weifang, Shandong Province - near where Mingjie Liu was born and worked. At a generations old Shandong print shop, employees were sorting through old New Year woodblocks when they found a partial plate for this map. The other panels remain lost.

This map was collected in China in the late 19th century by Dr. Albert Peck (1848-1923). Peck went to China in 1880 as medical missionary, where he administered the Williams Hospital in Pangjiachuang (龐家莊), Shandong Province (山東). After more than 20 years practicing medicine in Shandong, Peck entered into private practice working as, among other positions, Foreign Medical Attaché to the Beiyang or First Republic of China (1912 - 1928). When Yuan Shikai (袁世凱) was elected president of China in 1912, ending 2000 years of imperial rule, Peck became his medical advisor. Dr. Peck was decorated with the Order of the Double Dragon by the Chinese Imperial government, and twice received the Order of the Bountiful Harvest under the Republic. The map, along with an assortment of other historical items relating to late 19th century and early 20th century China, was collected by Albert Peck during his service in China and preserved in the Peck family collections. Upon their return from China, the Pecks settled in Northern California.

This map is rare and entirely unknown of outside of China. Examples appear from time to time in the Chinese market, but most other known examples are in extremely poor usually fragmentary condition, missing large sections or whole panels. The preset example is not only the earliest, but the finest example of Mingjie Liu's work known.

This map is owned jointly by Geographicus and Barry Lawrence Ruderman Rare Maps.

Mingjie Liu (1857 - 1911) (刘明杰) was a Qing Dynasty Chinese folk artist and printer. He was born in Hanting District, Weifang, Shandong, China. He is known for his paintings and folk characterizations, mubǎn nianhua (木版年画), made for Chinese New Year Festivals - a Shandong tradition - which he began producing at just 8. Politically, he was nationalist but anti-imperialist and anti-feudalist. He created many paintings and prints satirizing the ruling elite - including the Dowager Empress Cixi - and deploring foreign incursions into China. Most of his work was eventually seized and destroyed as subversive. His cartographic corpus is limited, but he is known for three maps, among them his Full Modern and Ancient Map (古今地舆全圖), which was issued as early as 1892 and is China's first commercially produced map. In 1811, Mingjie Liu traveled to the city of Yingkou, Liaoning province, in order to sell a painted fan. On the way he established himself in an abandoned temple. During a torrential rainstorm, the decrepit building collapsed, killing Liu. Learn More...

Very good. Mounted on scrolls in 6 panels. Size indicated includes all six panels.
Looking for a high-resolution scan of this?