1913 War Office Map of China and is Railroads, Telegraphs, and Treaty Ports 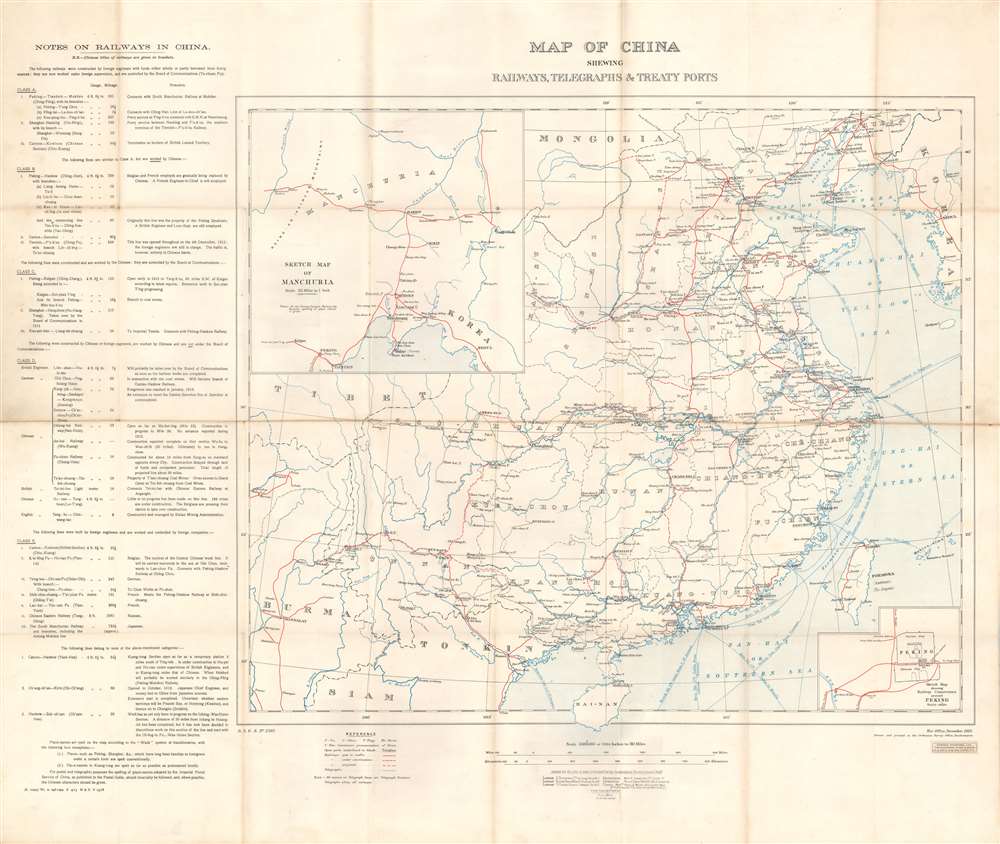 1913 War Office Map of China and is Railroads, Telegraphs, and Treaty Ports

Chinese railroad and telegraph networks on the eve of World War I.

This is a 1913 British War Office map of China and its railroads, telegraphs, and treaty ports. A system of red lines traces the Chinese railroad network. Solid red lines mark rail lines open to traffic, dashed red and white lines highlight lines currently under construction, and dashed red lines illustrate projected lines. Solid black lines follow telegraph lines. Blue lines in the Yellow Sea, Eastern Sea, and Southern Sea mark undersea cables connecting Chinese ports to other coastal Chinese cities and foreign nations. China's river system is also illustrated and labeled, and many cities along these rivers had been opened to foreign trade, a detail indicated by whether or not the city is underlined. An inset in the lower right details Peking, including the divisions of the Chinese City, Tartar City, and Imperial City. A second inset in the upper left corner illustrates railway connections in Manchuria that connect with Vladivostok and the Trans-Siberian Railway in Russia.

The first railway to be built in China was a 600-meter narrow-gauge demonstration line that a British merchant assembled in Beijing in 1864 in hopes of securing a national contract from the Qing. The Emperor was unimpressed and ordered the railroad disassembled. The next effort, again by the British, was built in 1876, without Qing approval, between Shanghai and Woosung (Baohan, Shanghai). Following the First Sino-Japanese War (1894 - 1895), the Qing began to recognize the advantage of railroads, and modern technology in general, and began granting construction contracts. Railroad construction continued throughout the remaining years of the Qing and during the Republic of China Period (1912 - 1949). During the Second Sino-Japanese War (1939 - 1945), Japanese companies also built numerous railroads in the occupied territories. After the establishment of the People's Republic of China in 1949, the new government under Mao Zedong invested heavily in the railway network. From the 1950s to the 1970s, railroad lines throughout the country were dramatically expanded. Some lines, particularly in the mountainous regions of southern and western China, were not completed until recently.

This map was created by the British Ordnance Survey Office in Southampton for the British War Office and published in November 1913. The OCLC catalogs over a dozen in institutional collections worldwide, including the collections at the Library of Congress, Yale University, Princeton University, the National Library of Scotland, the University of Cambridge, The British Library, and the Bibliothèque nationale de France. It is nonetheless extremely scarce on the market.