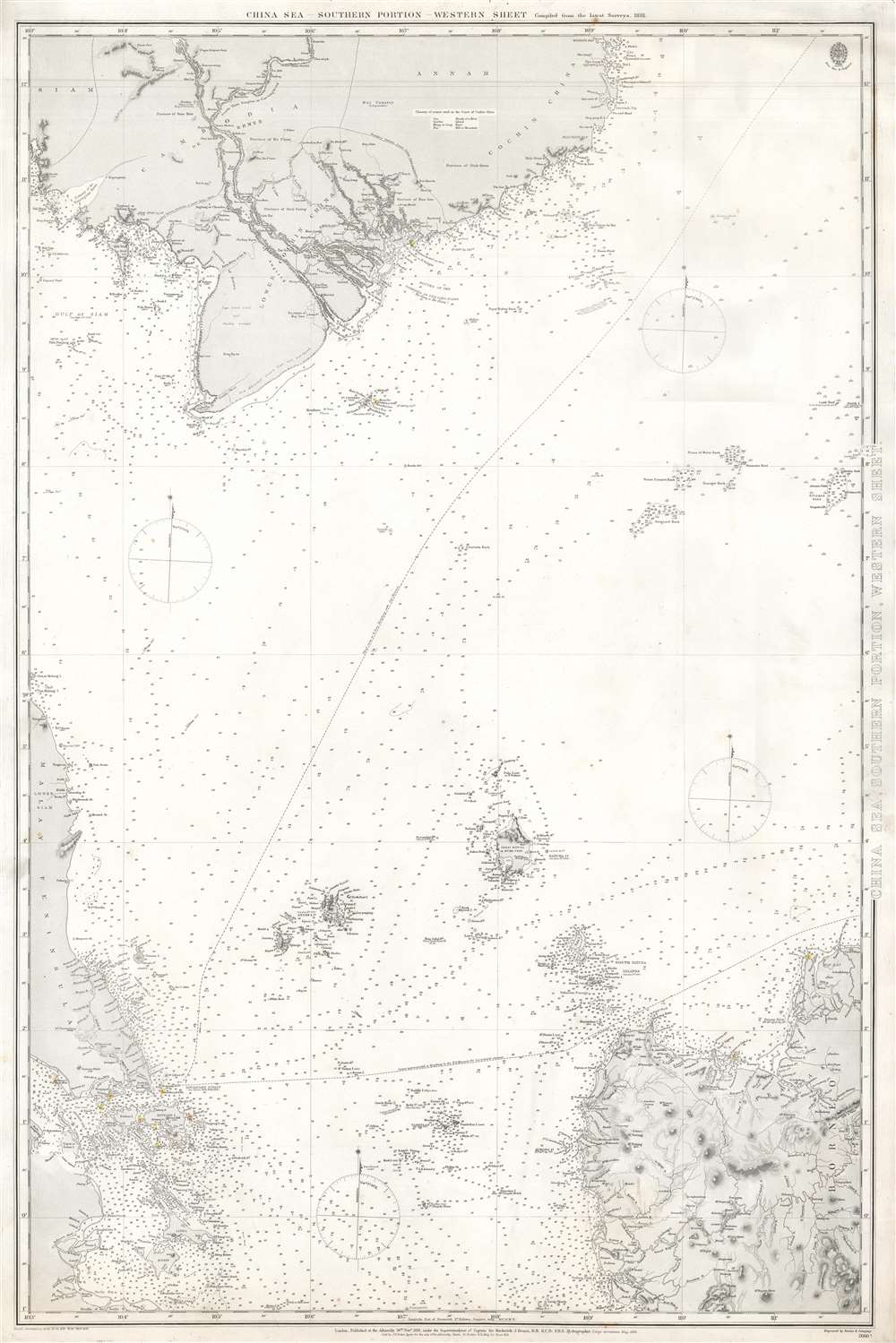 Includes an incredible amount of detail near Singapore and along the Vietnamese coast.
$750.00

This is an 1887 British Admiralty nautical chart or maritime map of Southeast Asia. The chart depicts the region from Singapore, the Malay Peninsula, and Sumatra to northern Luzon in the Philippines and from Cambodia and Vietnam (labeled here as Cochin China and Annam) to Sumatra and Luzon. Highly detailed, myriad depth soundings are indicated throughout, particularly along the coastline of Luzon, in the Straits between Sumatra and Singapore, along the coast of Vietnam, and tracing the habitual shipping lanes around the region. Cities, towns, and villages are identified, including Saigon, as are coastal landmarks, such as rivers and large hills. The dashed lines represent two different routes used to travel between Singapore and Hong Kong, both British possessions at the time of this chart's publication. Boundaries are indicated in Indochina between Cambodia, Lower Cochin China, Annam, and Siam.

This map was created by the British Admiralty and originally published under the superintendence of Captain Sir Frederick J. Evans in 1881, with corrections on this particular example dating to 1887.


Captain Sir Frederick John Owens Evans (March 9, 1815 - December 20, 1885) was a career Royal Navy officer and hydrographer. Evans entered the navy in 1828 as a second-class volunteer. Evans served in on nine different ships before being named a master in 1841, aboard the HMS Fly. Evans and the crew of the Fly spent the next five years surveying the Coral Sea, the Great Barrier Reef, and the Torres Straits. Evans returned to the south seas in 1847, when he arrived in New Zealand with orders to survey the Middle and South Islands. He served in the Baltic Sea during the Crimean War. In 1855, well-known for his scientific knowledge, Evans was named superintendent of the compass department of the navy. He was named chief naval assistant to the Hydrographer of the Admiralty in 1865 and succeeded him in 1874. Evans resigned his post as Hydrographer in 1884 and in 1885 was appointed one of the British delegates to the International Meridian Conferenced in Washington, D.C. He died at his residence in London on December 20, 1885. Evans married Elizabeth Mary Hall on November 12, 1846. Learn More...

Very good. Even overall toning. Closed margin tears professionally repaired on verso. Blank on verso.
Looking for a high-resolution scan of this?