1878 Turner Map of Sichuan and Yunnan, China and Tibet 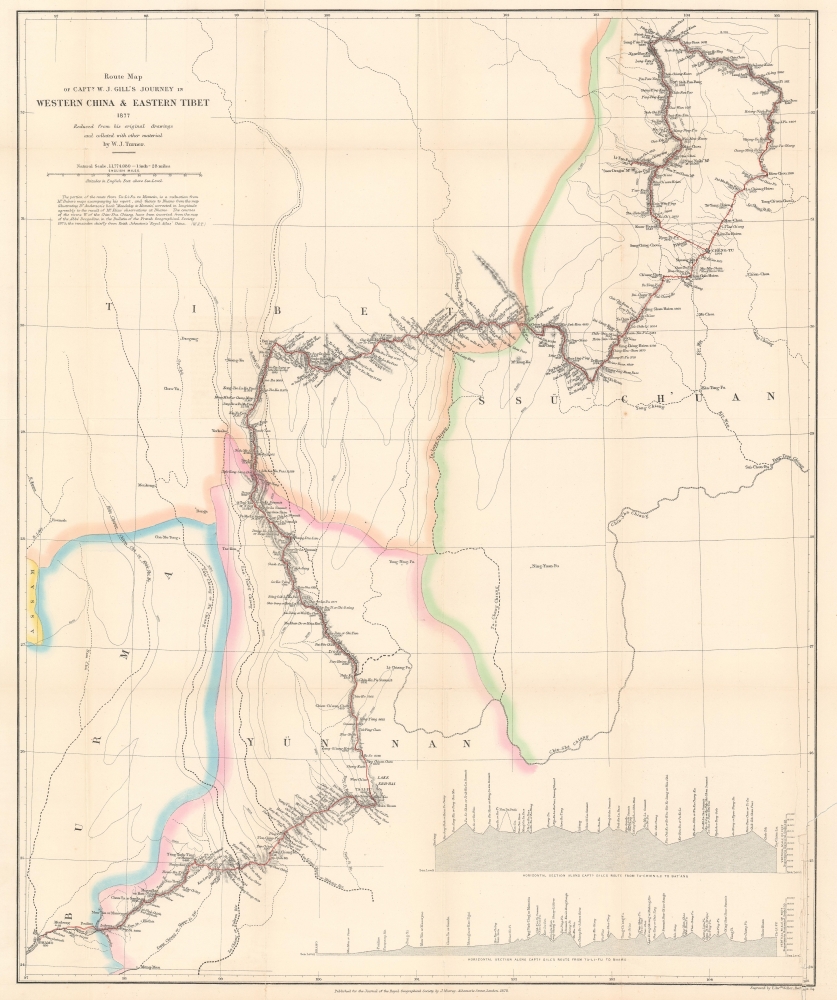 1878 Turner Map of Sichuan and Yunnan, China and Tibet

This is a scarce and important 1878 William John Turner map of western China and eastern Tibet tracing Captain William John Gill's 1877 expedition through the region. The map depicts the region from the Irrawaddy River to the Yangtze River and from northern Sichuan Province to Bhamo, Myanmar (Burma). Gill's expedition route is traced by a red line, which includes the month-long 400-mile circular journey north of Chengdu before his guide, William Mesny, arrived in Chengdu. Cities, towns, and mountain peaks and passes along the route are labeled and their elevations given. Two cross sections of Gill's route are situated in the lower right corner. Different colors are used to highlight the borders of Sichuan, Yunnan, Tibet, Burma, and Assam, and rivers throughout the region are indicated by dashed lines.

Captain William John Gill (September 10, 1843 - August 11, 1882) was an English explorer and British military officer born in Bangalore, India who attended the Royal Military Academy and was commissioned in the Royal Engineers. He spent nine years with the Royal Engineers, mostly in Britain but spent eighteen months in India from September 1869 to March 1871. After inheriting a fortune from a distant relative, he chose to stay in the army and use his newfound wealth to pursue his love of exploration and travel while at the same time gathering intelligence for the British government. Over the course of his life Gill took part in expeditions to Persia, China and Eastern Tibet, the Balkans after the Russo-Turkish War, Afghanistan after the Second Anglo-Afghan War, Tripolitania and Cyrenaica, and Egypt. Gill died when his party was attacked by a group of Bedouins while in Egypt on August 10, 1882.

Gill set of from Shanghai on January 23, 1877 with Edward Colborne Baber (April 30, 1843 - June 16, 1890), the British representative at Chongqing. These two departed ways after reaching Chongqing, and Gill continued to Chengdu, the capital of Sichuan, where he was going to meet his guide and companion for the rest of the expedition William Mesny (1842 - December 11, 1919). Mesny, a Jersey-born Briton, was not scheduled to arrive in Chengdu for several weeks, so Gill set out on a month-long 400-mile circular journey through the mountains of northern Sichuan Province, becoming the first European to travel through this part of the world. Gill arrived back in Chengdu shortly before Mesny. The pair left Chengdu on July 10, 1877, on a different route than originally planned due to a strained political situation between Russia and Great Britain. Gill and Mesny instead decided to travel via eastern Tibet to northern Burma (Myanmar), and Gill surveyed their route through Tibet until they reached Dali City (Talifu), the western capital of Yunnan Province. Their route after leaving Dali City, however, was known territory, as Edward Colborne Baber had already surveyed the territory between Dali City and the Irrawaddy River. On November 1, 1877, Gill and Mesny reached Bhamo on the Irrawaddy River, from which they continued down the Irrawaddy to Rangoon and then on to Calcutta by sea, where the party disbanded.

This map was drawn by William John Turner, engraved by Edward Weller, and published in Volume 48 of The Journal of the Royal Geographical Society. The OCLC records examples of this map as being part of the collection at Indiana University and the University of Manchester in the United Kingdom. We are also aware of an example in the collection at Princeton University. No examples on the private market are recorded.

Gill, W.J., 'Travels in Western China and on the Eastern Borders of Tibet.',The Journal of the Royal Geographical Society Vol. 48, (London: John Murray) 1878

Good. Backed on archival tissue for stability. Wear and toning along original fold lines. Areas of infill along fold lines and at fold intersections. Blank on verso.

Harvard University Bulletin, Volumes 4-5, 'Classified Index to the Maps Contained in the Publications of the Royal Geographical Society', #318. OCLC 41378821.
Looking for a high-resolution scan of this?