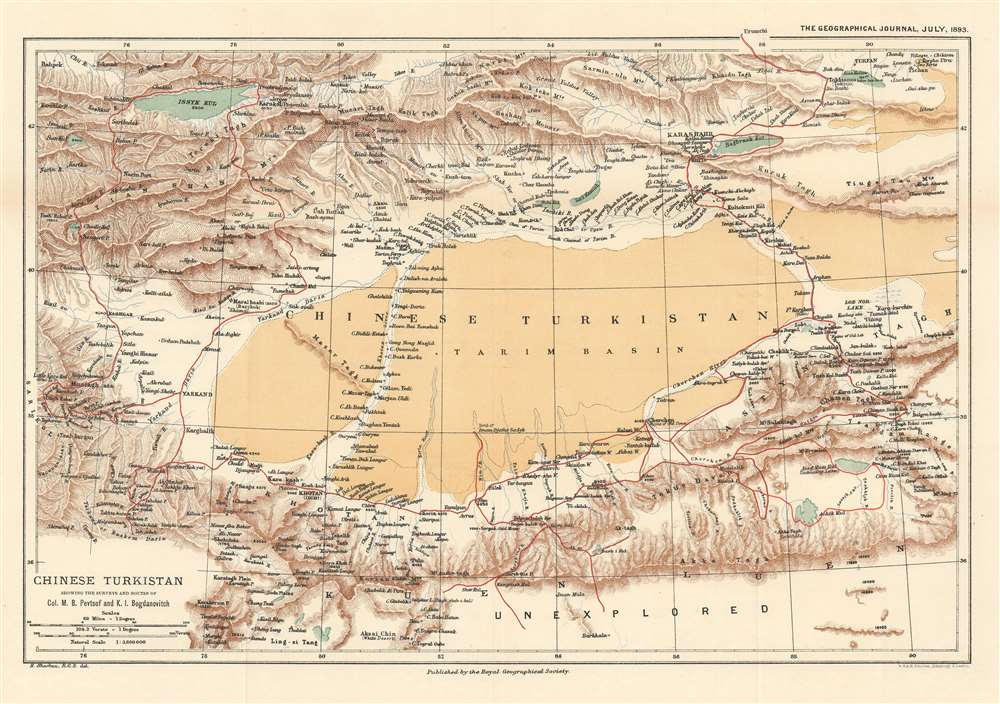 This is an 1893 Henry Sharbau map of Xijiang Province in China and Kyrgyzstan. The map depicts the movements of the 1889 Imperial Russian Geographical Society expedition to Central Asia led by Mikhail Vasilievich Pevtsov, which are traced by the thick red line. An impressive level of detail is present. Numerous towns and villages are identified, as are rivers and mountain peaks. Issyk Kul, the second largest salt water lake in the world, is situated in the upper left corner.

Little research has been conducted concerning the Pevtsov Expedition to Central Asia, but we have been able to piece together some of its story. Mikhail Vasilievich Pevtsov (1843 - 1902), a Russian major general, traveler, and researcher, was placed in charge of the expedition after the untimely death of noted explorer Nikolay Przhevalsky (1839 - 1888) in Karakol, on the eastern shore of Issyk Kul. Bogdanovich, the first geologist, to visit the Tarim Basin, produced numerous significant discoveries.

This map was created by Henry Sharbau, printed by the firm of W. and A.K. Johnston, and published by the Royal Geographical Society to accompany E. Delmar Morgan’s article ‘The Pevtsof Expedition and M. Bogdanovitch’s Surveys’ in the July 1893 edition of The Geographical Journal. Two examples are catalogued in the OCLC as being part of the collections at the Library of Congress and The British Library.