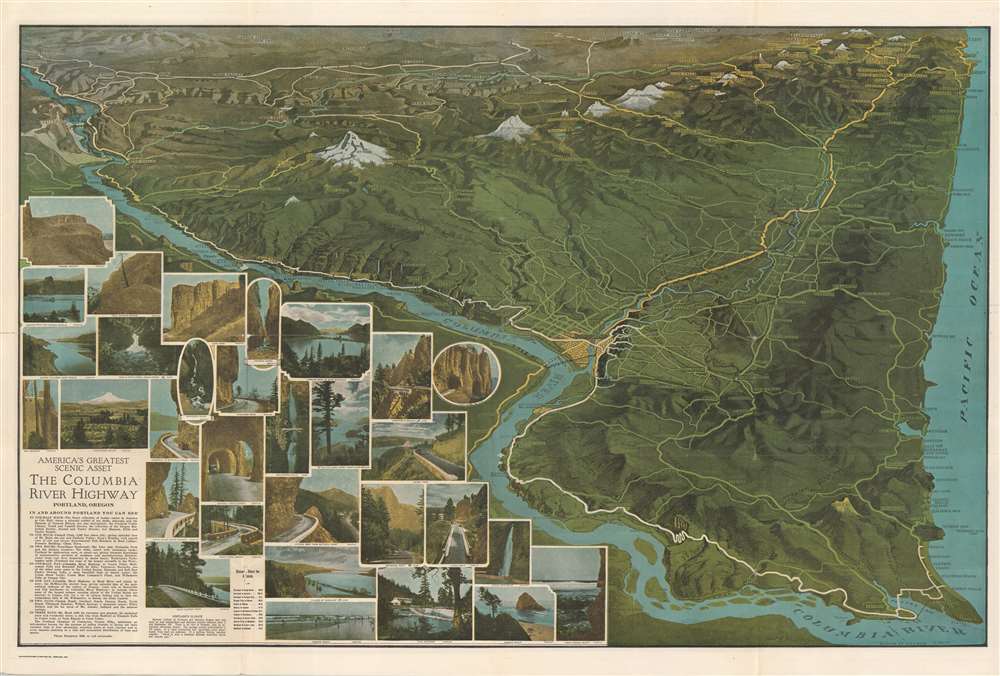 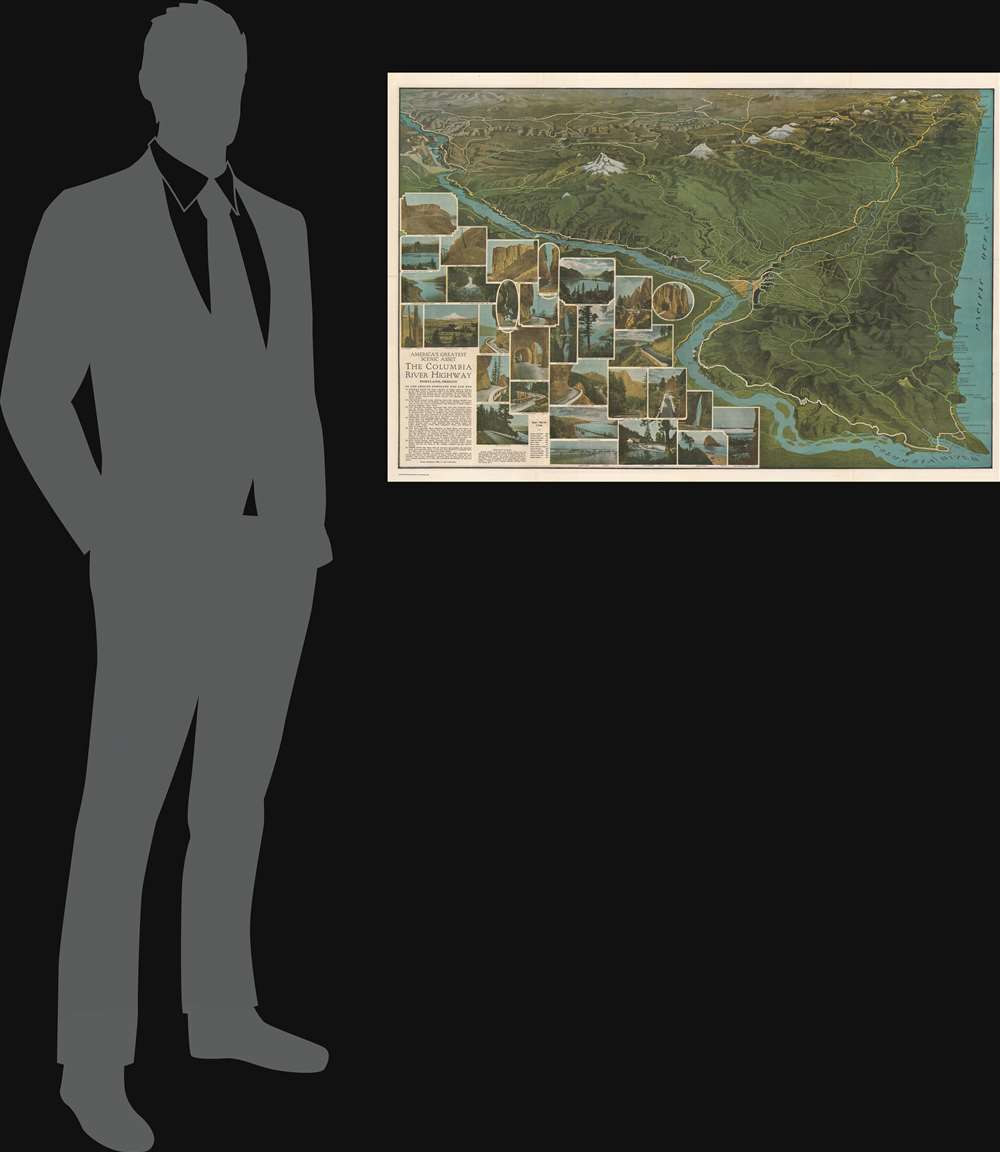 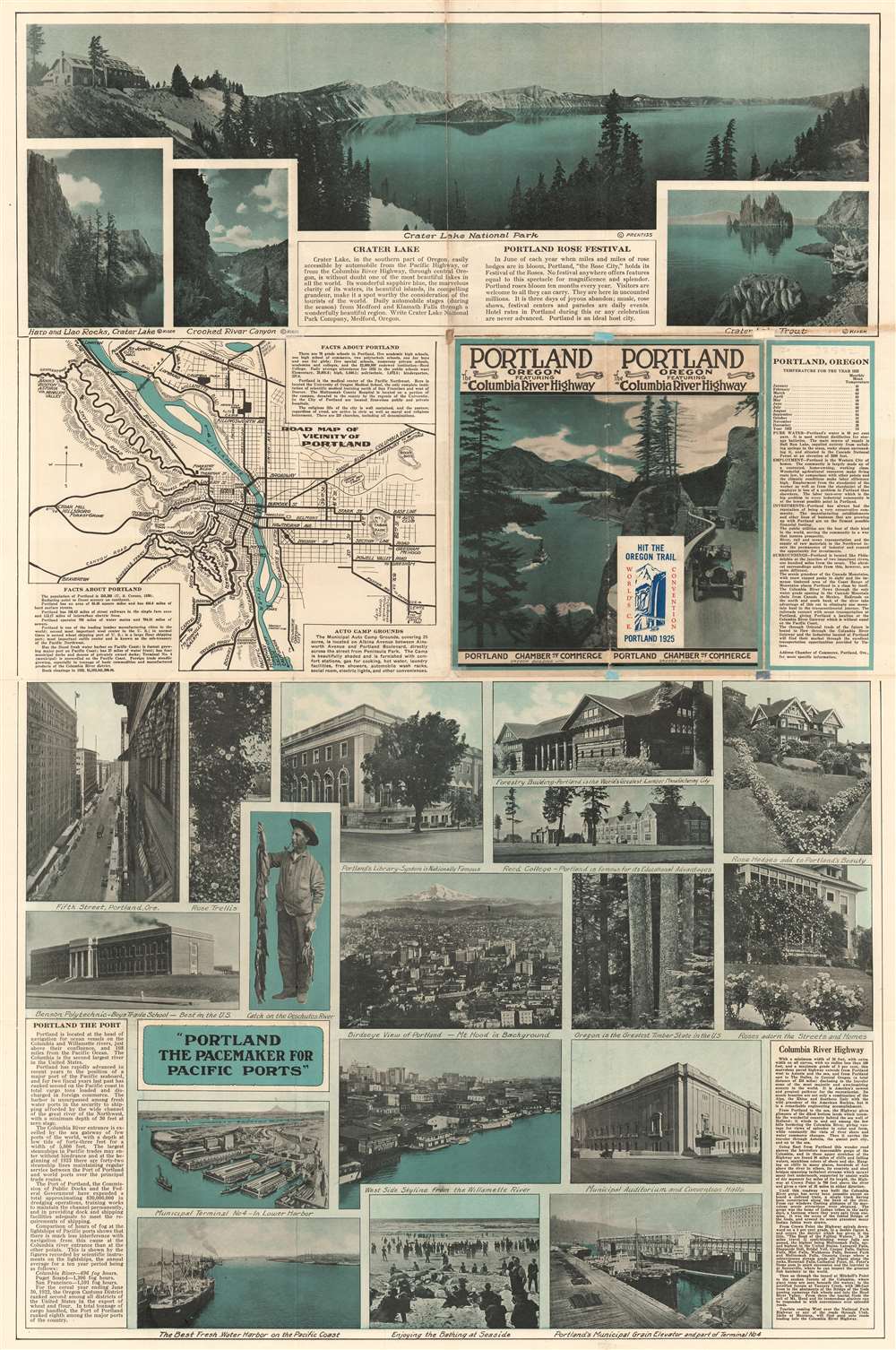 A striking 1925 southward looking view of the Columbia River and Portland, Oregon. Centered on Portland, the view extends inland along the Columbia River as far as Arlington, and south along the Pacific Coast to Crescent City and Mount Shasta. The Columbia River Highway is highlighted, as is the route south from Portland to Mt. Shasta. Other important mountains and terrain features are illustrated in view form, including Mount Hood, Mount Jefferson, Mount Washington, The Three Sisters, etc. In the lower left, vignette views illustrate exceptional sights and provides sample itineraries.

The verso focuses on Portland, offering a large city map, as well as illustrations of prominent buildings, a discussion of the virtues of Portland Port, the Columbia River Highway, Crater Lake, and the June Portland Rose Festival.

One the great American heritage highways, the Columbia River Highway connects Troutdale and The Dalles, following the Columbia River Gorge. The road was built between 1913 and 1922. Even while under construction it was promoted as 'America's Greatest Scenic Asset'. The challenging route, with steep grades and a narrow alignment, was designed by engineer and landscape architect Samuel C. Lancaster (1864 - 1941). Lancaster built his road not only for transportation, but to highlight the Columbia Gorge's scenic waterfalls, cliffs, and canyons. Although portions of the route opened as early as 1915, the full highway was not inaugurated until June 27, 1922. It remains in use today.

This view was drawn by Fred A. Routledge on behalf of the Portland Chamber of Commerce. It was printed 1925 by Kilham Stationary and Printing of Portland. We are aware of variants as early as 1919 and as late as 1929.

Fred A. Routledge (September 7, 1871 - April 1936) was an American artist and cartographer best known for his pictorial maps and bird's eye views. Born in Abilene, Kansas, Routledge spent most of his early life in Rockford, Illinois before moving to Portland, Oregon. Routledge worked with the publication West Shore for a short time before finding himself out of work. He found work with the Morning Oregonian beginning in 1895 as the head of its Art Department, a position he reportedly held until 1906. At that time it is clear that hand-drawn illustrations were being replaced by photographic images, but Routledge's work continued to appear in the Oregonian over the ensuing decades. Routledge also worked as artist and cartographer on illustrated books, two of which were published in 1915. Until his death, Routledge produced pictorial maps for many different companies, including Union Pacific, and as promotional material for scenic drives throughout Washington. He married fellow artist Lydia McGowan in 1896. Learn More...

Good. Minor verso reinforcement along some fold lines, with minor infill at a few fold intersections.