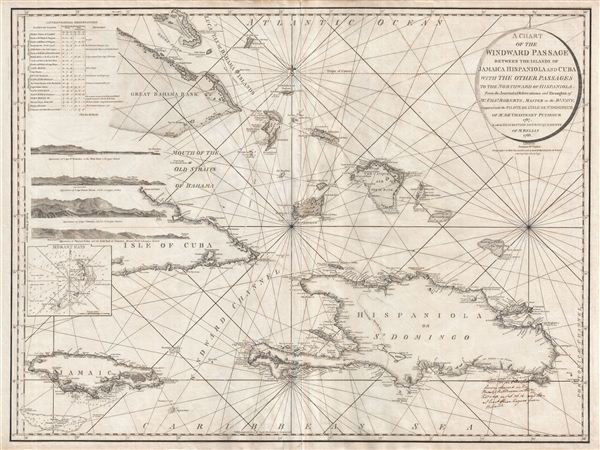 Scarce nautical chart of the Windward Passage, a popular hunting ground for Caribbean pirates and privateers.

A mesmerizing and extremely scarce 1795 Charles Roberts nautical chart of the Windward Passage, between Cuba and Hispaniola (Santo Domingo), in the Greater Antilles, West Indies. Centered on Great Iguana Island (Le Mornet or Grand Inague) in the modern day Bahamas, this map covers from eastern Cuba to the Porto Rico Channel and from Guanahani Island (Cat Island, where Columbus supposedly landed) southwards to include all of Hispaniola and Jamaica. Cuba is overlaid with four land profiles illustrating Cape St. Nicholas, Cape Dame Marie, Cape Tiburon, and Morant Point (Jamaica). An inset in the lower left quadrant, just above Jamaica, illustrates the Morant Keys, a particularly dangerous area of sea to the southeast of Jamaica. There are numerous depth soundings and rhumb lines throughout. A chart in the upper left quadrant details Roberts' astronomical observations.

This extraordinarily detailed and masterfully engraved chart is a product of the final days of Caribbean piracy and privateering. The late 18th and early 19th century saw a resurgence of privateering as successive colonial powers jostled for supremacy in the region. Though piracy was on the rise throughout the Caribbean, nowhere was it more prevalent than in the Windward Passage, a vital maritime trade artery between Cuba and Santo Domingo. This era gave rise to the French pirates Pierre and Jean Lafitte, among the most successful pirates of all time. This map offers some indication that was in fact working sea chart in the form of a curious manuscript annotation in the lower right quadrant correcting the southern coast of Hispaniola.

Charles Roberts (1739 - 1825) was a British navigator and nautical surveyor active in the late 18th century. Roberts spent most of his life in the British West Indies and along the coasts of South America where is compiled and updated several nautical charts during his long career as a Master in the Royal Navy. He is specifically credited with three scarce charts focusing on various passages in the Greater Antilles. Rogers did most of his observational work among merchant vessels traversing the West Indies and personally records at least 24 such voyages. Roberts died at Leith in 1825 at the age of 86.


William Faden (July 11, 1749 - March 21, 1836) was a Scottish cartographer and map publisher of the late 18th century. Faden was born in London. His father, William MacFaden, was a well-known London printer and publisher of The Literary Magazine. During the Jacobite Rebellion (1745 - 1746), MacFaden changed his family name to Faden, to avoid anti-Scottish sentiment. Faden apprenticed under the engraver James Wigley (1700 - 1782), attaining his freedom in 1771 - in the same year that Thomas Jefferys Sr. died. While Thomas Jefferys Sr. was an important and masterful mapmaker, he was a terrible businessman and his son, Jefferys Jr. had little interest building on his father's legacy. MacFaden, perhaps recognizing an opportunity, acquired his son a partnership in the Jefferys firm, which subsequently traded as 'Faden and Jefferys'. Jefferys Jr. also inherited Jefferys Sr. title, 'Geographer to the King and to the Prince of Wales'. With little interest in cartography or map publishing Jefferys Jr. increasingly took a back seat to Faden, withdrawing completely from day-to-day management, although retaining his finical stake, by 1776. The American Revolutionary War (1775 - 1783) proved to be a boomtime for the young 'Geographer to the King', who leveraged existing materials and unpublished manuscript maps to which he had access via his official appointment, to publish a wealth of important maps, both for official wartime use and for the curious public. This period of prosperity laid financial underpinning for Faden, who by 1783, at the end of the war, acquired full ownership of the firm and removed the Jefferys imprint. In 1801, he engraved and published the first maps for the British Ordnance SurveyBy 1822, Faden published over 350 maps, atlases, and military plans. He retired in 1823, selling his places to James Wyld Sr. Faden died in 1836.