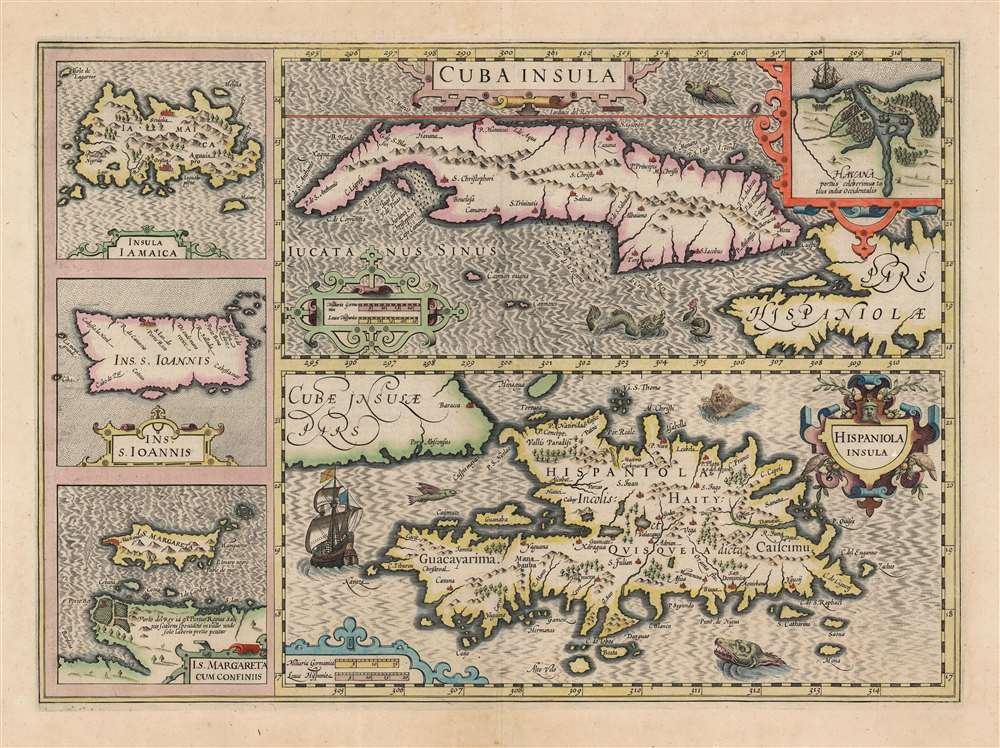 This is a superb, original color example of Jodocus Hondius's 1609 map of Cuba and Hispaniola, with inset maps of Jamaica, Puerto Rico, and Margarita Island. It is a beautifully engraving, whose rich detail, ships and sea monsters make it a most desirable work.

Hondius' geographical information was drawn from the 1569 Mercator wall map of America, which also informed the Mercator map of the western hemisphere that would appear in the early editions of the Mercator-Hondius atlas. Neither it nor Hondius' own 1606 map of the Americas showed the Caribbean islands in sharp detail, and so this sheet was engraved to provide sharper focus on these significant islands. A map focusing on the West Indies as a whole would not be added to the Mercator-Hondius atlas until 1636, so for the first thirty years of the atlas this map - or more precisely, this collection of five maps on a single sheet - represented the most detailed depiction of these islands in the atlas. Tellingly, its last appearance in the book was in a 1638 Latin text edition. Apparently Hondius and Jansson decided a full map of the Caribbean Islands was preferable, and thus did not rework the plate.

Cuba takes pride of place, including the Cayman Islands, the Isla de Pinas, and part of Hispaniola. There is an inset map of the port of Havana and its vicinity. The beautifully engraved sea areas include several sea monsters. The map of Hispaniola, although placed below Cuba, is better detailed. A fine sailing ship and three sea monsters appear off the coast. One of these monsters appears to be a gargantuan, aquatic Yorkshire terrier menacing the northern coast. Jamaica, Puerto Rico (Ins. S. Ioannis) and the island of Saint Margaret all appear on the left. S. Margareta includes part of the nearby Venezuelan coast.

This map was engraved by Jodocus Hondius the Elder for inclusion in the 1606 edition of the Mercator and Hondius Atlas and was included in editions of the work until 1634. This example conforms typographically to the 1619 French edition of the work. Although the map does appear on the market, early examples with sharp impressions and bright original color, as here, have become increasingly scarce.

Mercator, G., and Hondius, J., Gerardi Mercatoris L'Atlas ou Méditations Cosmographiques de la Fabrique du Monde et Figure D'Icelvy, (Amsterdam: Hondius) 1619.     Mercator's Atlas is one of the most important works in the history of cartography. Although in fact Ortelius was the first to publish a proper atlas, the Teatrum Orbis Terrarum, Mercator's Atlas the first book to employ the term Atlas for a collection of maps. The term is derived both from the mythical titan, Atlas, who was forced to bear the world upon his shoulders, and the Libyan king, philosopher, and astronomer of the same name that, so the legend goes, constructed the first globe. Mercator dedicated the final 25 years of his life to compile the Atlas. He published two parts during his lifetime in 1585 and 1589, but the final part published posthumously by his son Rumold Mercator, in 1595. The map plates for the Atlas were later acquired by Jodocus Hondius who published the most complete and well known edition in 1606. It was Jodocus who popularized the Atlas and who did the most to elevate Gerard Mercator's work.