1680 Jansson Map of the Northern Dvina River in Russia 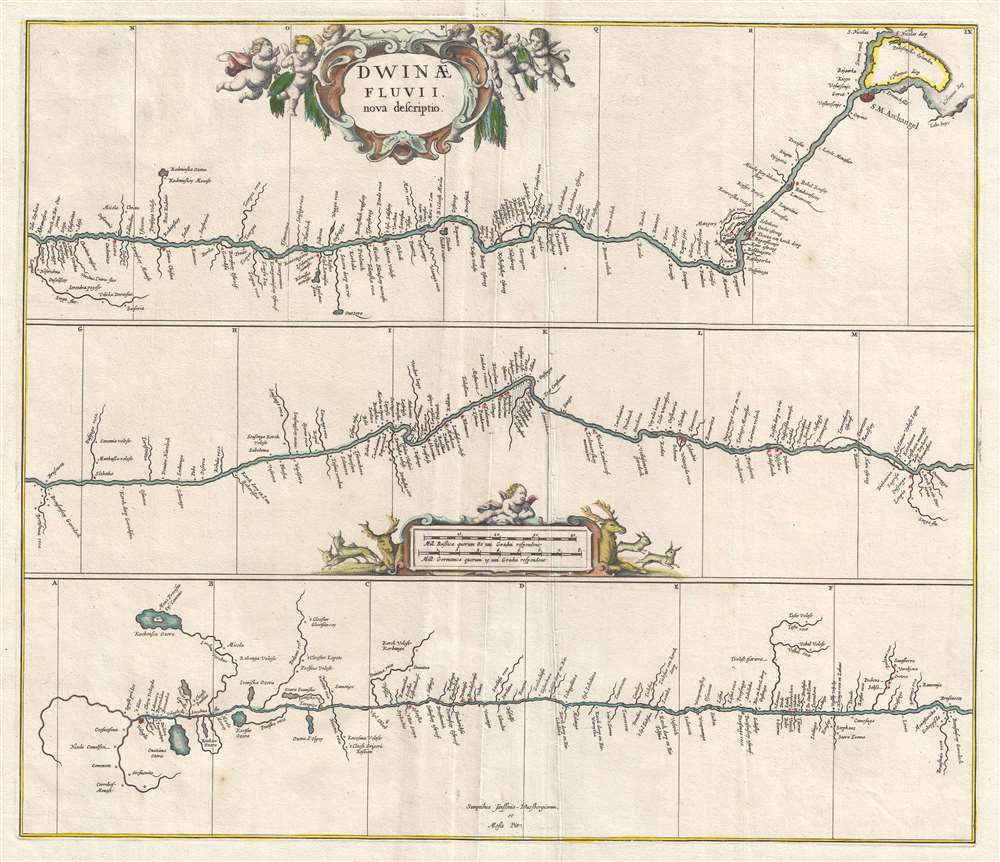 1680 Jansson Map of the Northern Dvina River in Russia

This is a 1680 Jan Jansson map of the Northern Dvina River in northern Russia. The map, divided into three sections, follows the course of the river from its source in Vologod Province as it empties into Dvina Bay of the White Sea near Archangel (Arkhangelsk). Several smaller tributaries and towns are identified along the river's banks.

A decorative title cartouche, flanked by putti, is situated along the top border, while a second cartouche located in the middle of the middle section of the river bears the scales and is adorned with illustrations of stags and rabbits.

The map was created by Jan Jansson and published by his son-in-law Johannes Waesberger in conjunction with Moses Pitt in 1680. We note two examples cataloged in OCLC which are part of the collections at Harvard University and the Bibliothèque Nationale Universitaire de Strasbourg.


Moses Pitt (c. 1631 - 1697) was one of the largest British book publishers, printers, and booksellers of the second half of the seventeenth century. A very ambitious man who's plans eventually led to bankruptcy, Pitt was a small bookseller and publisher before he embarked on some enormous, very expensive, ventures. The largest was the 'English Atlas', which he intended to contain 900 pages of text and 600 plates in eleven volumes, and partnered with Jan Jansson's heir Johannes Waesberger. The first volume was published in 1680, but rising costs contributed to only four volumes being published. Pitt's ambitions did not stop him there, as he began a huge property speculation scheme in Westminster and took over the printing office of Oxford University. By 1685, however, he was forced to sell of much of his stock at auction, which marks the end of his print publishing. His final bankruptcy and arrest for debt happened in 1689 and he spent the following eight years in prison, only to be released shortly before his death. Pitt published The Cry of the Oppressed: Being a True and Tragical Account of the Unparallel'd Sufferings of Multitudes of Poor Imprison'd Debtors In Most of the Gaols in England, an appeal on behalf of people imprisoned for debt, in 1691. Learn More...