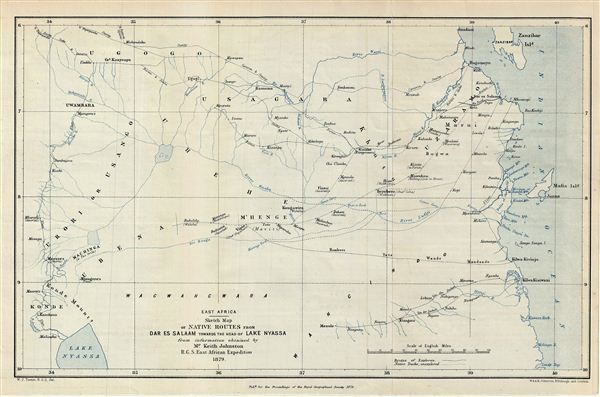 This uncommon and fascinating 1879 A. K. Johnston map of central Africa illustrated the native African travel routes from Dar es Salaam to the head of Lake Nyasa (Lake Malawi). This map was is based upon the explorations of the missionary Alexander Keith Johnston, the cartographer's son, who died leading the Royal Geographical Society mission to Lake Nyasa (Lake Malawi). Towns and villages are noted along with the names of some tribes and chiefs, with some towns noted as 'deserted.' This map was drawn by the by the missionary's grieving father, mapmaker Alexander Keith Johnston,

Bassett, T., and Scheven, Y., Maps of Africa to 1900 : a checklist of maps in atlases and geographical journals in the collections of the University of Illinois, Urbana-Champaign, 910.6RLn.s./rbx.
Looking for a high-resolution scan of this?