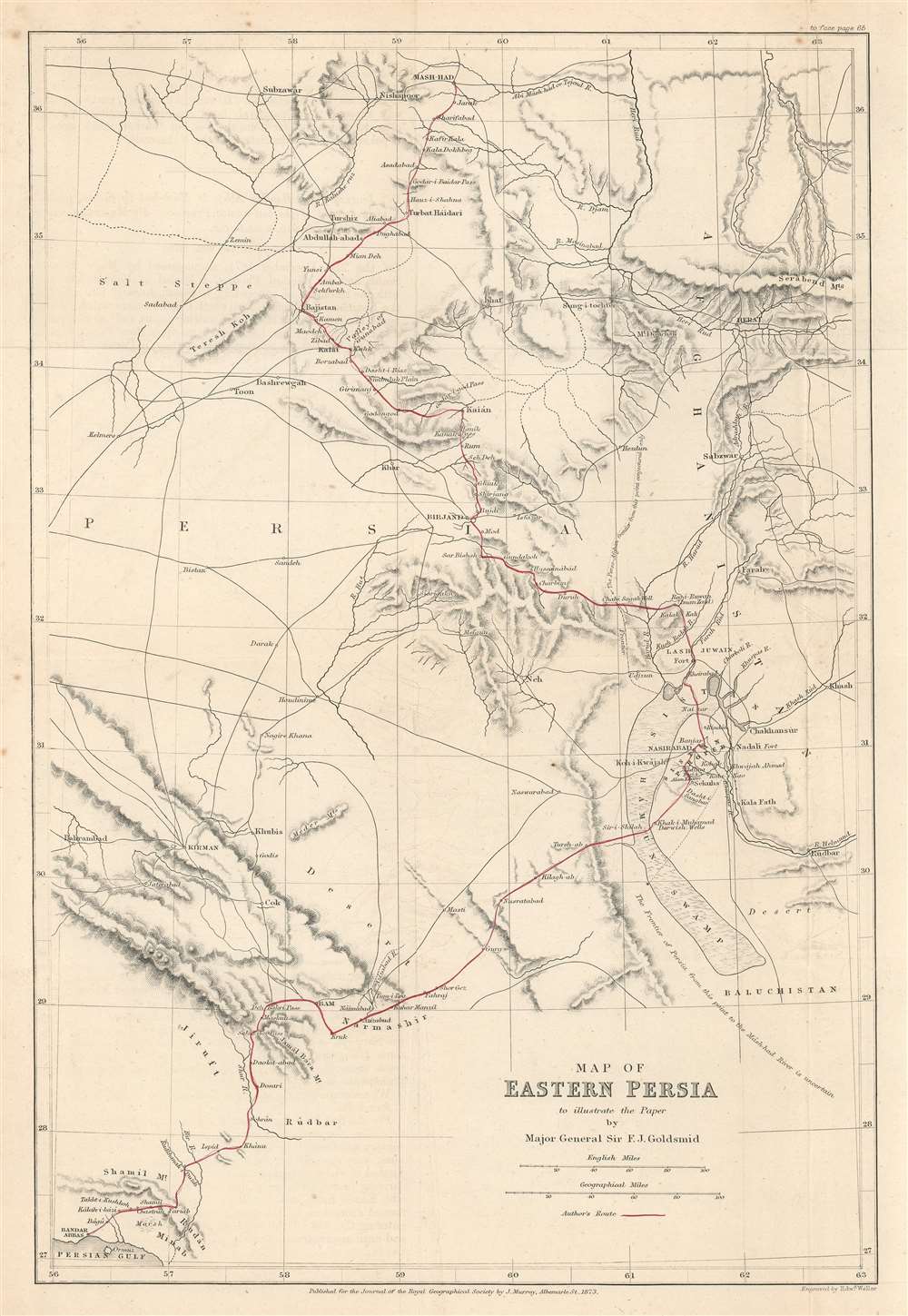 The beginning of events leading to the Second Anglo-Afghan War.
$350.00

This is an 1873 John Murray map of eastern Persia, or modern-day south-central Iran. A thin red line highlights Sir Frederic John Goldsmid's route through the region from Bandar Abbas on the Strait of Hormuz north to Mash-had. Goldsmid was dispatched to this region in order to enforce a British-negotiated Selstan frontier boundary settlement, a move in the 'Great Game' intended to secure Persia and Afghanistan as buffer provinces between Russia and British India.

A year earlier in 1872, Goldsmid headed a commission that negotiated a new boundary between Afghanistan and Persia - the Selstan frontier. The line stretched from Banda to Kuh-i-Malik Siah (a hill at the modern Afghanistan-Iran-Pakistan tripoint) and followed the Helmand River. Although Goldsmid was considered one of the foremost authorities on Persia and the Middle East in the British Empire, his attempts to settle the Selstan boundary dispute ill-considered, as they failed to take into account the natural shifts of the Helmand River, as well as shifting tribal allegiances. Moreover, it was impossible to please both sides, with the new boundary alienating both the Shah Naser al-Din Shah Qajar (1831 - 1896) and Afghan Emir Mohammad Yaqub Khan (1849 - 1923). Despite opposition on all sides, Goldsmid and a team were sent to Persia to enforce the 1872 Boundary Settlement. This was a diplomatic, not a military mission, and primarily involved Goldsmid attempting to convince local tribal leaders on both sides to accept the border. The mission left ill-feelings all around, with Yaqub Khan attributed it to the beginning to souring relations with the British - a degenerative series of diplomatic mis-steps that ultimately led to the Second Anglo-Afghan War (1878 - 1880).

'The Great Game' was a diplomatic confrontation between the British and Russian Empires over Afghanistan and other territories in Central and Southern Asia. The conflict, rooted in long-standing animosity between Russia and Britain, revolved around Afghanistan, which, while lacking significant resources of its own, was strategically situated. For its part, Russia feared Britain was making commercial and military inroads into Central Asia, an area long within the sphere of influence of St. Petersburg. Britain, conversely, feared Russia making gains in India, 'the jewel in the crown' of British Asia. The escalating tensions led to several wars and proxy wars: The First Anglo-Afghan War (1839 - 1842), the First Anglo-Sikh War (1845 - 1846), the Second Anglo-Sikh War (1848 - 1849), and the Second Anglo-Afghan War (1878 - 1880), along with the Russian annexations of Khiva, Bukhara, and Kokand. Then as now, Afghanistan proved a grinding stone upon which the world's great empires diminished themselves, none achieving a definitive victory despite committing staggering resources. The Great Game 'ended' on September 10, 1895 with the signing of the Pamir Boundary Commission Protocols, which stabilized the border between Afghanistan and the Russian Empire - but well into the 20th century the British were well aware the conflict remained. Regarding the attitude of Afghans to the British and to the Russians, the general assumption of the British was that 'Some will fight for us, some against us, but all will fight.'

This map was created by John Murray and engraved by Edward Weller to accompany Goldsmid's article published in The Journal of the Royal Geographical Society in 1879. An empty OCLC reference exists for this map, suggesting it was cataloged by a former library cooperative member. An example is part of the institutional collection at Princeton University.

Goldsmid, F.J., 'Journey from Bandar Abbas to Mash-had by Sistan, with some Account of the last-named Province', The Journal of the Royal Geographical Society Vol. 43 (London: John Murray) 1873.