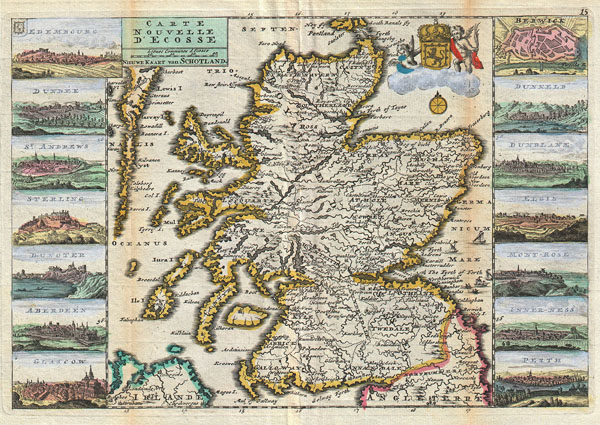 A stunning map of Scotland first drawn by Daniel de la Feuille in 1706. Depicts the entirety of Scotland surrounded by views of fourteen Scottish cities, including Edembourg (Edinburgh), Dundee, St. Andrews, Sterling, Dunoter, Aberdeen, Glascow (Glasgow), Berwick, Dunkeld, Dunblane, Elgin, Mont-Rose, Inner-ness and Perth. A playful cartouche in the upper right quadrant depicts the armorial crest of Scotland surmounted by a crown and flanked by cherubs. Four tiny sailing ships and two rowboats are drawn plying the waters near Edinburgh. Title in upper left quadrant in both French and Dutch. This is Paul de la Feuille's 1747 reissue of his father Daniel's 1706 map. Prepared for issue as plate no. 17 in J. Ratelband's 1747 Geographisch-Toneel.