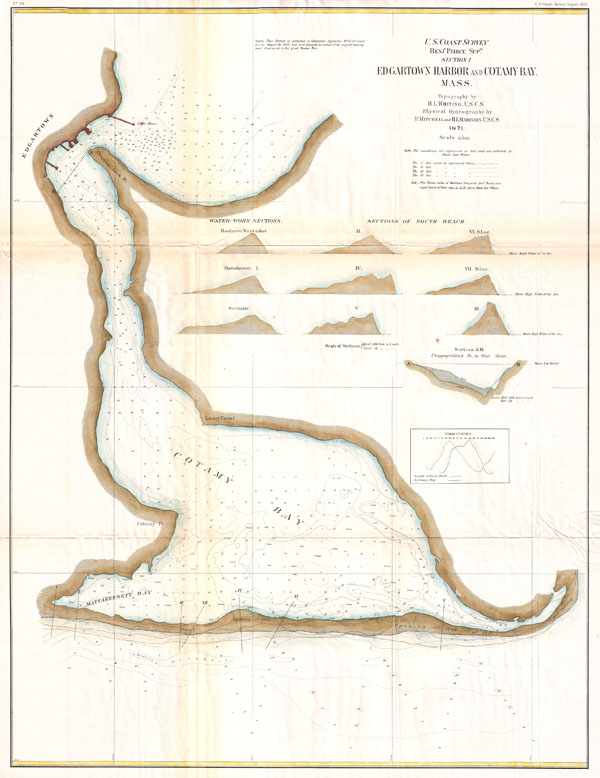 A very rare 1872 U.S. Coast Survey Map of Edgartown and Cotamy Bay on Martha's Vineyard (Marthas Vineyard), Massachusetts. Depicts from Edgartown south to Mattakeesett Bay and east to the 'Opening of 1846.' Offers a countless depth soundings throughout as sell as 10 shore sectionals. An extremely uncommon find. The topography for this map was prepared by H. L . Whiting. The Hydrography is the work of Henry Mitchell (See biography below for H. Mitchell, son of William Mitchell) and H. I. Marindin. All work on this chart was completed by the Coast Survey under the direction of Benjamin Pierce, Superintendent of the Survey.


Henry Mitchell (September 16, 1830 – December 1, 1902) was an American oceanographer and hydrographer, and a co-founder of the National Geographic society. Born in Nantucket to surveyor and astronomer William Mitchell (December 20, 1791 - April 19, 1868), Henry joined the U.S. Coastal survey at the age of 19, and produced for the survey many charts of the waters near his home, both on Nantucket and Martha's Vineyard. He worked for four years to produce a chart of New York Harbor, which was hailed as the most accurate of its contemporaries. During his service with the survey he devised new methods for measuring tides and currents, advancing the science of hydrography beyond the production of new charts. He traveled extensively, visiting Europe to study the old world's canals, dykes and harbors, and even visited the Suez Canal in Egypt as it neared completion. In 1888 he would be among the thirty-three luminaries to found the National Geographic Society, proving instrumental in bridging fields in order to build the multidisciplinary foundation upon which the Society was based. Learn More...

Report of the Superintendant of the U.S. Coast Survey, (1872 edition).

Very good condition. Minor wear, verso repairs, and toning on original fold lines. Else clean.
Looking for a high-resolution scan of this?