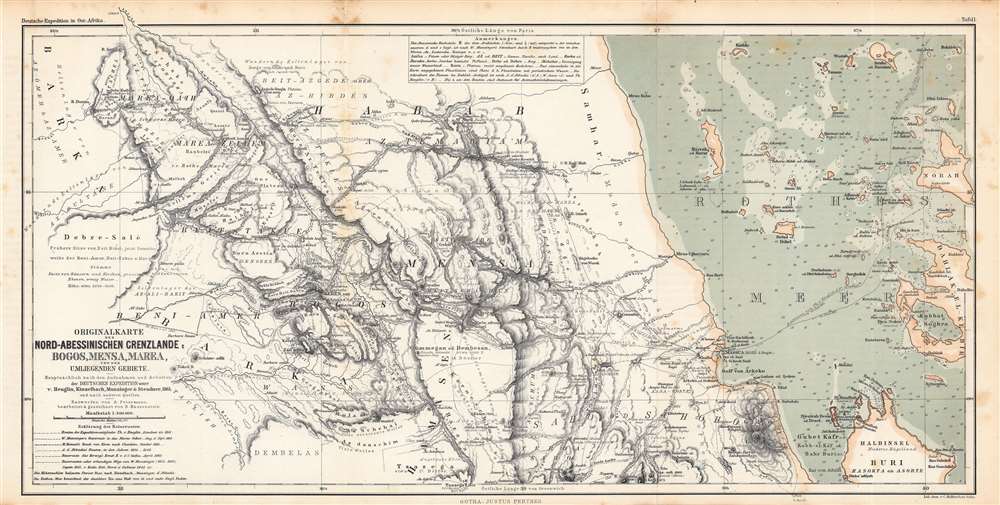 This is an 1864 Augustus Petermann and Bruno Hassenstein map of what is today Eritrea, including a nautical chart of the Red Sea along the Eritrean coast. It illustrates the routes of mid-19th century European explorers from the Red Sea westwards to the Sudan.

This map covers highlands in the west to Keren to the Red Sea in the east, including a beautiful nautical chart in the right third of the map. It utilizes Parisian feet for elevation, German miles for scale, and both Greenwich and Paris as Prime Meridians, while English fathoms are employed for soundings in the Red Sea. A note at top explains the pronunciation of Amharic and Arabic letters while also providing an explanation of terms transliterated from local languages.

The routes of several explorers are traced, as denoted by the lines in the legend at bottom-left. Among the earliest and most impressive were the travels of the French-Basque-Irish brothers Antoine Thomson d'Abbadie (1810 – 1897) and Arnaud-Michel d'Abbadie (1815 - 1893), who lived and trekked extensively in Ethiopia and the Horn of Africa in the 1830s - 1850s. Later explorers did not always fare so well. Hermann Steudner fell sick and died in April 1863, while Gottlob Theodor Kinzelbach died by poisoning in 1868 or 1869 at Afgooye (near Mogadishu). The map and the booklet it appeared in were primarily intended to recount the journeys of 'the German Expedition', nominally led by Theodor von Heuglin (1824 - 1876), which landed at Massawa (here as Massua) in 1861, and included Werner Munzinger (1832 - 1875), Kinzelbach, and Steudner. They were tasked with finding the lost explorer Eduard Vogel, who was believed to be in Khartoum but, it was later learned, had been killed in southern Sudan some five years earlier. Although an 'expedition', these explorers in fact acted independently, crossing paths and linking up for a time but then diverging on separate paths and joining up with other expeditions. Aside from seeking Vogel, they were also looking to more fully explore the region and locate the source of the Nile.

The port city of Massawa towards right was eyed by several successive empires, including the Portuguese, the Ottomans, the Egyptian Mehmet Ali Dynasty, and finally the Italians, who in 1885 made it the capital of their Eritrean colony. In 1897, the capital was moved inland to Asmara, at bottom-center, but Massawa continued to be an important port, the largest deep-water port on the Red Sea in the early 20th century.

This map was drafted by Augustus Petermann, edited by Bruno Hassenstein, and lithographed by Carl Hellfarth of the publisher Justus Perthes, based in Gotha. It was published as Plate (Tafel) No. 1 of the 1864 booklet Die deutsche expedition in Ost-Afrika, 1861 und 1862…, which was Supplement (Ergänzungsheft) No. 13 to the periodical Petermann's Geographische Mitteilungen. The full distribution of the map is difficult to determine due to inconsistent cataloging, but is known to be held by the British Library, the Bibliothèque nationale de France, the Staatsbibliothek zu Berlin, and the Bayerische Staatsbibliothek, and is scarce to the market.