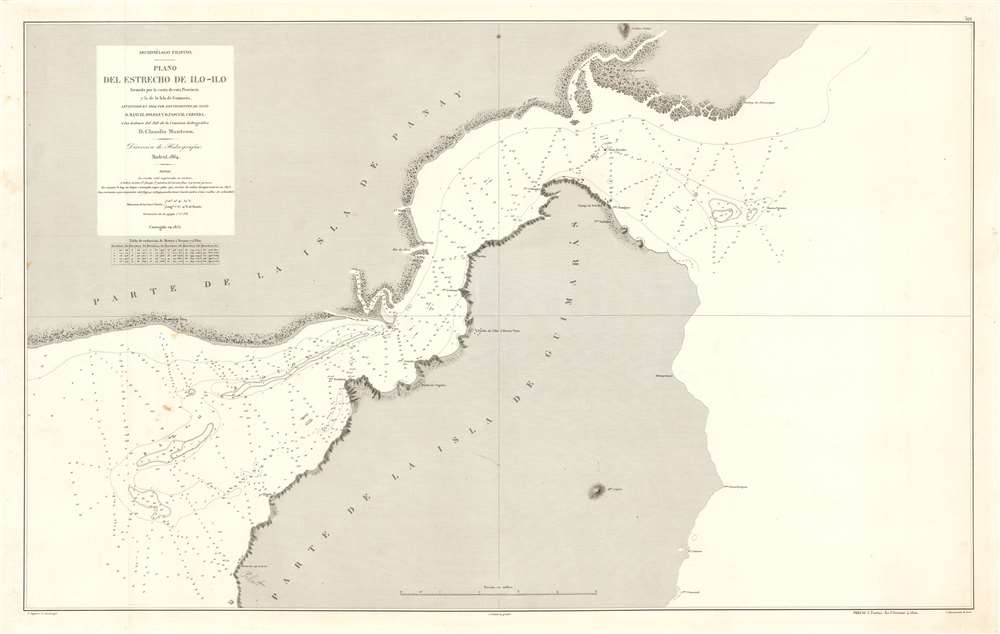 Includes the city of Iloilo, the third most active port in the Philippines.

This is an 1875 Direccion de Hidrografia and D. Claudio Montero nautical chart or maritime map of the Iloilo Strait in the Philippines. The Iloilo Strait separates Panay Island from Guimaras Island and connects the Panay Gulf with the Guimaras Strait. Depth soundings are indicated throughout, as are banks and shoals. Points along the coast are labeled, as is the port city of Iloilo, which is today the third busiest port in the Philippines with regard to number of ships. A manuscript anchor in drawn near Iloilo, indicating the presence of a safe harbor.

This chart was created by the Direccion de Hidrografia under the direction of D. Claudio Montero and was originally published in 1864 with the present example published in 1875. This map has not be catalogued in the OCLC and we have been unable to find any evidence of it appearing on the private market. A few examples of the 1864 edition appear in institutional collections and it is very rare on the private market.

Captain D. Claudio Montero (1824-1885) was a Spanish naval officer, and head of the Hydrographic and Scientific departments of the Spanish Navy. Upon entering the navy in 1839 at the age of 15, he was promptly tasked with hydrographic projects, clearly being groomed for position as a navigator and chartmaker. In 1845 he was made a Lieutenants, and assigned to the Philippines, where he would remain for a significant part of his military career. In 1856 he was appointed head of the newly-formed Comisión Hidrográfica de Filipinas. Both under his direction, and following it - between 1856 and 1899 - the Comisión published thirty-five nautical charts of the Philippine archipelago. By 1868, he had been appointed major general of the Philippine station, a position he retained until his return to the Spain to receive his 1869 appointment as head Hydrography and Science in the Ministry of the Navy.He continued to focus on Philippine affairs: in 1871, he joined the Philippine Council, of which he would become vice president - and in 1877, he returned to the Philippine Islands, this time as governor of Mindanao and commander of the Naval Division of the South of the Philippines. However, in early 1878, just a few months after his appointment, health problems forced him to submit his resignation in both positions. He returned to sea after his recovery for a time, and held positions as Rear Admiral in Spain and in Havana prior to his death.


The Direccion Hidrografía (1787 - 1927), also known as the Deposito Hydrografico and the Direction de Hidrografía, was the Spanish equivalent of the British Admiralty or the U.S. Coast Survey. This organization, founded in 1787, was commissioned to collect and produce accurate nautical charts of all waters frequented by Spanish vessels. In essence, it replaced the Casa de la Contratación de las Indias (House of Trade of the Indies), which closed its doors in 1790. Like most such organizations, the Direccion Hidrografía marked a new age in cartography. Rather than simply collect charts created by navigators, explorers, and merchants, the Direccion Hidrografía worked closely with naval and military personnel to mount cartographic and hydrographic expeditions in pursuit of the most accurate hydrographical, astronomical, and geodetic measurements. The Direccion Hidrografía created a massive library of nautical charts that, though not nearly as common as similar nautical charts by the U.S. Coast Survey and British Admiralty, are highly desirable for the beauty of their manufacture as well as their accuracy and detail. The office was originally located on Calle Ballesta, but relocated to 36 Alcala, both in Madrid. After 1908 the Dirección was subsumed into other governmental agencies. In 1927 the Direccion was absorbed into the Institute and Observatory of San Fernando, located in Cadiz. The library of original maps, charts, and journals was transferred to the Naval Museum of Madrid - where it resides to this day.


Juan Noguera (fl. c. 1850 – 1860) was a Spanish draftsman and engraver based in Madrid during the middle part of the 19th century. Noguera drafted and engraved maps for Francisco Coello, Direccion de Hidrografia, and others. Juan Noguera should not be confused with Clemente Noguera, who was also a senior line-engraver at the Direccion de Hidrografia. The two engravers may or may not be related. Clemente was significantly oder than Juan, and may have been an older relative.


Ignacio Tubau y Albert (fl. c. 1850 - 1872) was a Spanish engraver. Born in Barcelona, he was a follower of the Adacemia de San Fernando and was an engraver for the Direction de Hidrografia.

Very good. Light toning. Blank on verso.
Looking for a high-resolution scan of this?