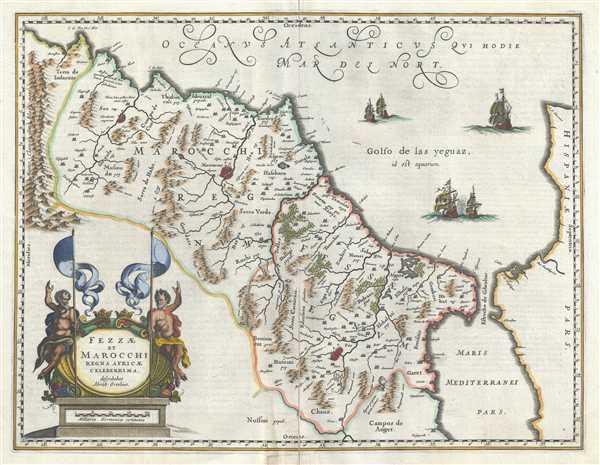 This is a beautiful 1653 map of Morocco on the Barbary Coast of northern Africa by Jan Janssonius. Oriented with north on the right, the map covers Morocco and the Kingdom of Fez from the Atlas Mountains north to the coast of Spain. The Strait of Gibraltar is also included. The map renders the entire region in extraordinary detail offering both topographical and political information with mountains and forests beautifully rendered in profile. The fortified towns of Marrakesh (Marruecos), Fez and Taradande are also identified. The map is based on the 1570 map by Abraham Ortelius, who is credited here in the title.

A highly elaborate title cartouche adorns the lower left quadrant of the map. Beautifully illustrated ships are seen sailing in the North Atlantic Ocean. This map is based on the 1570 map by Ortelius and issued by Janson in c.1660.