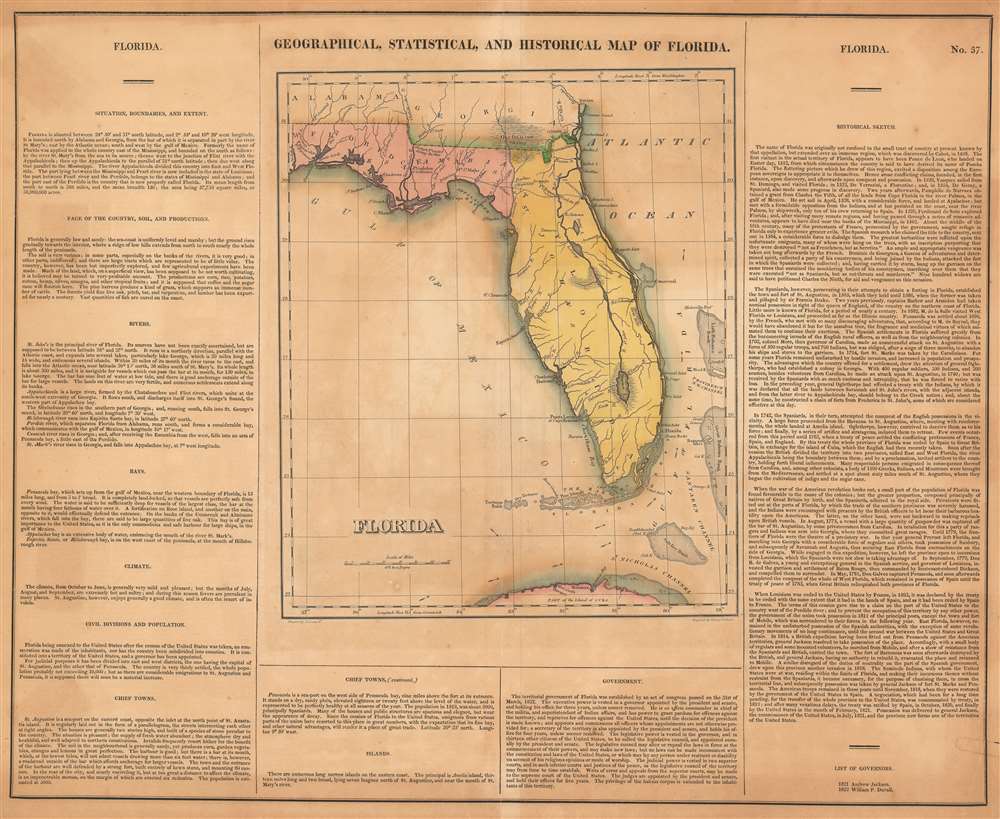 First map of Florida as a United States Territory
$700.00

Arguably the first map of Florida as a United States Territory. This is the 1822 first edition example of Henry Charles Carey and Isaac Lea's map of Florida, drawn by Lucas, Fielding, Jr. (1781-1854). The map depicts the region from the Perdido River to the Atlantic Ocean, and from Alabama and Georgia to the Florida Keys. The map presents Florida at a fairly early state of survey and settlement. It shows only two counties, Escambia and St. Johns. (Jackson and Duval were created in 1822 but do not appear here). In the north of Florida a number of towns appear - St. Augustine, Pensacola and St. Pedro, for example - but native settlements and forts predominate. The bulk of the peninsula shows little habitation. Roads, rivers, lakes and swamps are also labeled. The river system running the length of the peninsula is highly conjectural.

As with all the maps of the Carey and Lea atlas, this one is bordered on left and right with detailed and vigorously composed descriptions of the territory. The 'Historical Sketch' on the right hand side of the map takes the reader from Cabot's arrival in 1496 to the formation of the Territory in July of 1821 (formally declared thus by Congress March 20, 1822).

This map was published by Henry Charles Carey and Isaac Lea in the 1822 edition of Carey and Lea's A Complete Historical, Chronological and Geographical Atlas.

Henry Charles Carey (December 15, 1793 - October 13, 1879) was an American economist and publisher. The leading 19th-century economist of the American school of capitalism, Carey was born in Philadelphia, Pennsylvania and was the son of Mathew Carey (1760 - 1839), who was also an influential political reformer, editor, publisher, and economist. Henry Charles Carey took over the family publishing firm in 1825 after his father retired, and, partnering with his brother-in-law Isaac Lea, formed the imprint Carey and Lea. Carey retired from publishing c. 1838 and focused on his career as an economist. He was a prolific writer on the subject and published numerous works on economics between 1835 and 1876. Carey and Lea became one of the most successful publishing houses in America, publishing, among others, American editions of the works of Walter Scott and James Fenimore Cooper, The Encyclopedia Americana and a dictionary of German lexicon. Learn More...


Isaac Lea (March 4, 1792 - December 8, 1886) was an American publisher, geologist, and conchologist. Born in Wilmington, Delaware, Lea was born into a Quaker family. In an uncharacteristic move for a Quaker, Lea gave up the Quaker belief in pacifism, thus losing his claim to being a member of the Society of Friends, and joined the 7th Company of the 24th Pennsylvania Militia to fight in the War of 1812. Little is known about Lea's life after the war. He married Frances Ann Carey (1799 - 1873), the daughter of the successful publisher Mathew Carey (1760 - 1839) on March 8, 1821, with whom he had three children, one of which died in infancy. After Mathew Carey retired from publishing in 1825, Lea partnered with Carey's son Henry Charles Carey (1793 - 1879), and formed the publishing house Carey and Lea. Carey and Lea became one of the most successful publishing houses in America, publishing, among others, American editions of the works of Walter Scott and James Fenimore Cooper, The Encyclopedia Americana and a dictionary of German lexicon. After Henry Carey retired c. 1838, Lea continued publishing with William A. Blanchard, who had been promoted to partner in the Carey and Lea firm in 1833, under the imprint of Lea and Blanchard. Eventually, Lea's two sons Henry Charles Lea (September 19, 1825 - October 24, 1909) and Mathew Carey Lea (1823 - 1897) took over the publishing firm and changed its hame to Lea Brothers, after Isaac Lea decided to retire to dedicate himself to his scientific pursuits. Lea devoted his scientific study to natural history, with particular interest in freshwater and land mollusks, which he studied for fifty years. Learn More...