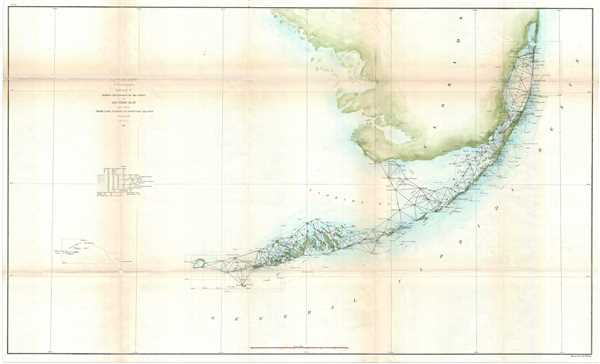 This is an interesting 1861 sketch of the nautical map or chart of the Florida Keys. The sketch shows the progress of the survey from 1845-1861 and includes triangulation and longitudinal markings. This map covers from Cape Florida to the Tortuga Islands and includes all of the Florida Keys. Most of the individual islands are named.. The entire work was produced in 1861 under the direction of A. D. Bache, Superintendent of the Survey of the Coast of the United States and one of the most influential American cartographers of the 19th century. Issued in the 1861 edition of the Superintendent’s Report.

Very good. Wear and toning on original fold lines.Backed on archival tissue.
Looking for a high-resolution scan of this?