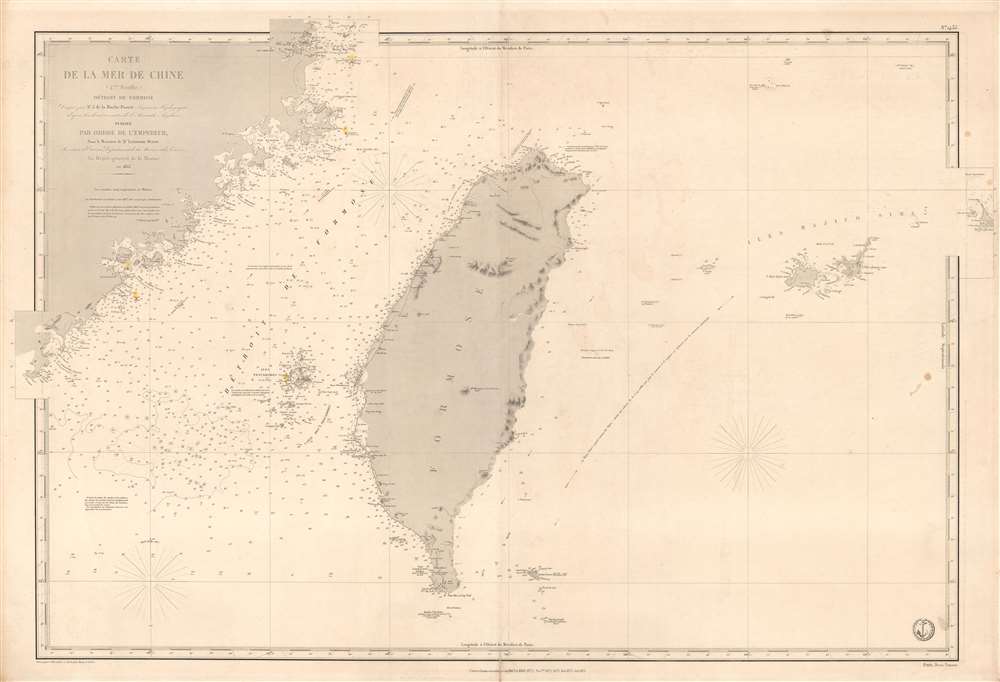 Issued in response to headhunters in South Formosa.

This is a rare 1873 French Depot de Marine nautical chart of Taiwan / Formosa and vicinity. The map is centered on Taiwan, but includes parts of Fujian, China, the Pescadores / Penghu Islands, and the Yaeyama Islands (Iles Majico Sima). This map was issued at a time when Taiwan was heavily in the news - headhunters of coruse - which can account for the issue and reissue of this chart from 1867 through the present 1873 edition.

On March 12, 1867 an American merchant ship, The Rover, shipwrecked on the dangers reefs off the coast of southern Formosa while en route from Swatow to Newchwang. Fourteen American sailors, including the Captain Joseph Hunt and his wife Mercy G. Beerman Hunt, were slaughtered by the indigenous Taiwanese Paiwan peoples - supposedly in retaliation for the slaughter of several neighboring Kaolut tribesman by unnamed 'foreigners' (probably Japanese). The U.S. Government subsequently sent a punitive expedition, the Formosa Expedition to extract retribution but this too met its fate at the hands of the Paiwan. There can be little doubt that the event, known as the 'The Rover Incident' (羅發號事件), underscored the need for better nautical charts of the region and inspired the 1867 update and reissue of this map.

A very similar incident followed in December of 1871, accounting for the next two updates in 1872. The Mundan Incident began in 1871, when a Rukyuan tax boat shipwrecked on an uncharted reef in the treacherous waters near the southern tip of Taiwan. The disoriented crew of 66 wandered some 100 km inland to the region of Mudan, where they were captured by the Paiwan who subsequently beheaded 54 of them. The remaining crew members managed to escape with the help of Han Chinese soldiers to the Qing controlled city of Tainan, on the west coast of Formosa. From there, they were transported to Fuzhou, Fujian and ultimately back to the Ryukyus.

One year after this map was issued, the Japanese retaliated. The Japanese Punitive Expedition to Taiwan (台湾出兵) was an 1874 military expedition launched by Imperial Japan in retaliation for the Mundan Incident (牡丹社事件). The Taiwan Expedition, as it is known in Japan, marked the first Imperial Japanese military and naval expedition outside of Japan and set the stage for the Japanese annexation of Ryukyu in 1879 and Taiwan in 1895. Imperial Japan sought redress from the Qing, but their pleas were rejected by because the Qing considered Ryukyu Islands a subject state, therefore any chastisement would be an internal matter, and the Paiwan themselves were considered unacculturated aboriginals outside of Qing jurisdiction. Imperial Japan took the Qing response as a rejection of sovereignty over both the Ryukyu kingdom and eastern Taiwan. Japan launched its own retaliatory mission in May of 1874, in which Saigō Tsugumichi led 3600 Japanese soldiers to Paiwan territory. In the Battle of Stone Gate, the Paiwan were soundly defeated. The Japanese army subsequently withdrew from Taiwan after the Qing agreed to pay an indemnity of 500,000 Kuping Taels (18.7 tons of silver) in a British arbitrated agreement.

Subsequently the Qing realized that they needed to assert greater control over the indigenous peoples of Eastern Taiwan and began a series of trade missions and military incursions. Their efforts began to yield results but were stymied by the Japanese takeover of Taiwan in 1895. With their far more brutal methods, Imperial Japan became the first government to fully control the island of Formosa.

Frist published in 1853, this map was compiled and drawn for the French Dépôt de Marine by Ferdinand Antoine Jules de la Roche-Poncié. The map was engraved by Chassant, and the lettering was completed by Jacques-Marie Hacq. It is loosely based on British Admiralty charts of the same period. It was later updated and revised with numerous significant updates to the present edition, 1873. Scarce, the only other example we have identified is located at the British Library at St. Pancras.

Ferdinand Antoine Jules de la Roche-Poncié (August 19, 1810 – March 30, 1881) was a French hydrographic engineer and cartographer active throughout the 19th century. Poncié was born in Vauxrenard, France. After graduating from the École Polytechnique in 1829 he joined the French navy, becoming a naval hydrographic engineer in 1832. Numerous important French surveys bear his name, including the first detailed hydrographic survey of the St. Pierre and Miquelon Islands, and numerous maps of East Asian waters. He received the Legion of Honor in 1841, ultimately attaining the grade of Commander. In 1860 he settled in Paris where he became a member of the Hydrographic Committee under Rear-Admiral Pierre Mathieu. He died in Paris in 1881. Learn More...