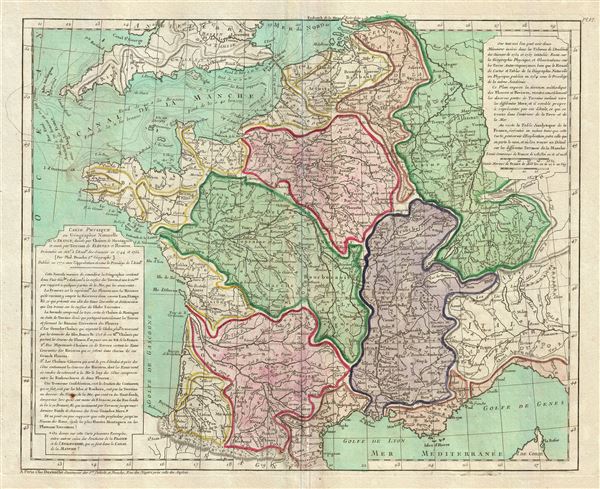 A scarce 1770 physical map of France by Philippe Buache. The map covers all of France highlighting the various river basins, including Rhine, Rhone, Meuse, Seine, Loire, Garonne, and its coastal basins. Various rivers, mountain ranges, gulfs, lakes, plateaus and other important natural and topographic features are identified, with relief shown by hachures. Several important towns and cities are also noted. The map also includes important notes and information in the lower left and upper right quadrants.

Historically, France at this time was under the reign of Louis XVI, the last Ancien Regime French King before the French Revolution. Louis XVI was probably not the worse king France ever had, but he was definitely in the wrong place at the wrong time. In the years just prior to the 1889 French Revolution, France had entered a period of sustained economic decline. French involvement in the American Revolutionary War and the Seven Years War strained the national treasury and put increased pressure on the peasantry. This was compounded by several years of poor harvest brought on by erratic weather patterns associated with el Nino and the 1783 eruptions of the Icelandic Laki and Grimsvotn volcanoes. The Royal court at Versailles, isolated and seemingly indifferent to the hardships of the lower classes, proved an easy target. Events came to a head on July 14th, 1789, when angry insurgents stormed the Bastille prison, giving birth to the bloody French Revolution and effectively ending the French monarchy. This map was issued as part of Philippe Buache and Guillaume Delisle's Cartes et Tables de la Geographie Physique ou Naturelle.


Jean-Claude Dezauche (fl. c. 1780 - 1838) was a French map publisher active in Paris during the first half of the 19th century. Dezauche's business model focused on editing and republishing the earlier maps of Phillipe Buache and Guillaume de L'Isle, which he acquired from Buache's heir, Jean Nicholas Buache, in 1780. Like Bauche and Dezauche held a position with the Depot de la Marine and his name many of their maps. Jean-Claude Dezuache eventually passed his business to his son, Jean André Dezauche.