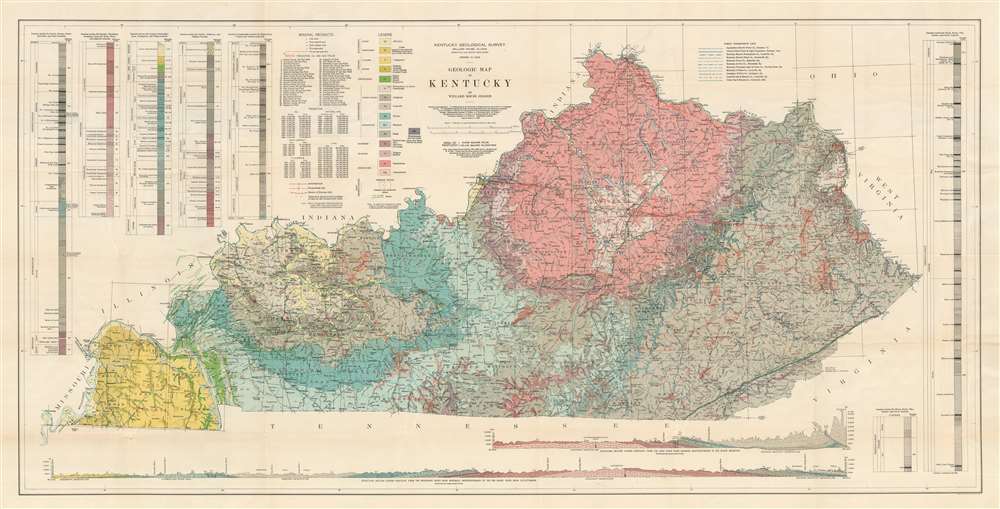 This is a gigantic 1929 Willard Rouse Jillson geological map of Kentucky. The map depicts the state from Missouri to Virginia and West Virginia and from Ohio, Indiana, and Illinois to Tennessee. Highly detailed, the locations of seventeen different geological formations are traced across the state using different colors and patterns to identify each individual formation. A legend situated in the upper right quadrant presents the seventeen different formations and which color is associated with each one. Fault lines within the state are also noted and marked by green lines. Coal mines and rock asphalt mines are also identified, as are productive oil and gas fields, which are marked by red areas filled with parallel lines. Each field is numerically identified and corresponds with an index situated in the upper left quadrant. Five different geologic cores are also included in the upper left quadrant, allowing the viewer to see the different layers of rock and other formations lower below the surface. A single core is included along the right border as well. Two profile sections of Kentucky illustrating the layers of formations from the side are included along the bottom border.

This map was created by Willard Rouse Jillson, published by the Kentucky Geological Survey, and engraved and printed by the U.S. Geological Survey. It is well represented in institutional collections but scarce on the private market.

Willard Rouse Jillson (May 28, 1890 - October 4, 1975) was an American geologist, historian, and academic, who was an expert on the history of the state of Kentucky. Jillson authored numerous books on the geology of Kentucky and on Kentucky politicians. He taught at the University of Kentucky in Lexington beginning in 1918 and later taught at Transylvania University from 1947. Jillson also served as director of the Sixth Kentucky Geological Survey and as Kentucky State Geologist. He also held the position of Curator of the State Museum and served as Chairman of the first Kentucky. State Park Commission. He also worked in the private sector developing oil and gas fields in Kentucky.