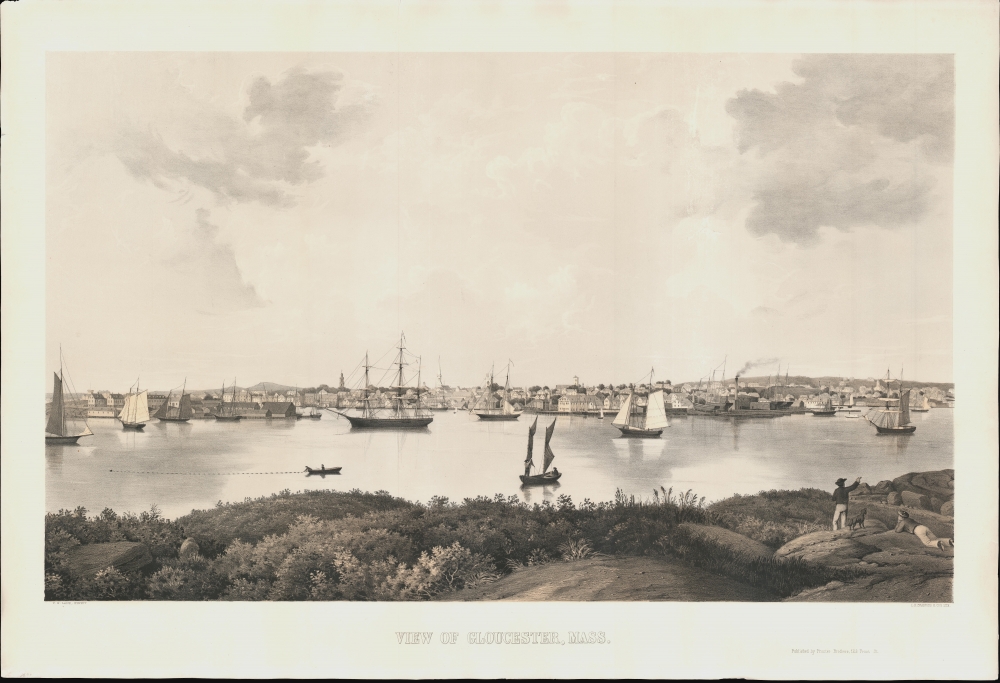 A fine 1859 lithographic view of Gloucester, Massachusetts, by the legendary Cape Ann marine painter Fitz Henry Lane. This is the third and largest of Lane's lithographic views of Gloucester. The view looks northeast towards Gloucester from Rocky Neck, an outcropping near Smith's Cove. While dimensionally the largest of Lane's Gloucester views, this also has the narrowest coverage, roughly 74°, allowing him to focus on the bustling Harbor Cove and adjacent Duncan's Point, where his studio was located.

Breaking Down the View

The view covers Gloucester harbor from Fort Point (at left), to Harbor Cove (at center), and Duncan Point (at right). Around Fort Point, most of the buildings are obscured by the city's bustling maritime traffic. Around Harbor Cove some constructions, including the steeples of the Universalist Church and a newly constructed Baptist Church, are recognizable. In the foreground two men in a wherry (small row boat) pull in a gill net - probably fishing for herring. A large bark at center is potentially a salt trader - by 1859 a declining business in Gloucester. Most of the smaller vessels are schooners - ideal for coastal fishing. The dichotomy underscores the transition Gloucester was then undergoing. Most major shipping had by this time moved to Boston, with its deep-water port, leaving Gloucester to smaller fishing vessels, more and more of which were calling it home. In the bucolic foreground, two children and a dog wistfully observe the busy comings and goings.

Lane's 1859 view was well received by the press, who promoted its virtues. This is a quote from the January 28, 1859 issue of the Cape Ann Advertiser

Few marine artists are equal to Mr. Lane in correctness and fulness of detail. His ships look like ships, and seem almost to be in motion, for they are drawn by one who knows every rope and line, both nautically and artistically. His reputation and established, and his pictures adorn the residences of many admirers in distant cities, where his productions are estimated according to their true value. We hope that his fellow citizens will appreciate the feeling which has prompted him to publish this new view of Gloucester, and by their patronage will reward him pecuniarily, as he deserves. The pictures offered as prizes are fine and faithful sketches of well-known localities, and need only to be seen to be appreciated.

This view is based upon a painting by Lane completed in 1857 or 1858. In 1858 the Cape Ann Advertiser began promoting subscription sales of the view. It was transferred to lithographic stone by fellow Gloucesterman Lodowick Harrington Bradford, and printed in by Proctor Brothers, also of Gloucester. According to the 1859 Gloucester Telegraph, only 300 pressings were completed. Today, surviving examples are scarce, we note 8 in institutional collections, but limited market history. Most examples appear in two colors, but some have additional hand-tinting, that was likely done aftermarket.

Fitz Henry Lane (December 19, 1804 - August 13, 1865) was an American artist, viewmaker, and lithographer active in the middle part of the 19th century. Lane's was born in Gloucester, Massachusetts and given the birthname Nathaniel Rogers Lane. Lane's family were prominent on Cape Ann, where Lanesville and Lanes Cove are named in their honor. Lane is known to have been handicap, but the nature of his impairment is unknown save that he could walk only with a crutch. He worked various jobs and in 1830, was identified as a shoemaker. His first known painting, Burning of the Packet Ship 'Boston' is dated to this same year. In 1831, Lane formally changed his name to Fits Henry Lane - the reasons are unclear. In 1832, he relocated to Boston, where he took an apprenticeship under William Pendleton, at the Pendleton Lithography Firm, founded by William and John Pendleton. The Pendleton Firm, one of America's first lithographers, provided a unique training opportunity for young artists. Most of its artists were not formally educated, but at Pendleton received art training as well as lithographic training. At Pendleton he completed his first major lithograph, the 1836 View of the Town of Gloucester, Mass., a significant piece praised both for its beauty and accuracy. In 1841 he struck out on his own, promoting himself as a marine painter. He also established partnerships with J. W. A. Scott and, in 1845, Keith and More. Lane successfully exhibited his painting at the American Art Union, the Boston Athenaeum, and at the Boston Artists’ Association. He returned to Gloucester in 1846 and in 1849, acquired a property on Duncan's Point. By this time, he was a prosperous and well-respected artist with an active following. While most of his early work focused on Gloucester, around 1849 he began traveling to Maine and produced maritime paintings there as well. Lane remained in Gloucester for the remainder of his days, producing a large corpus of work, and was prominent both socially and politically. Learn More...