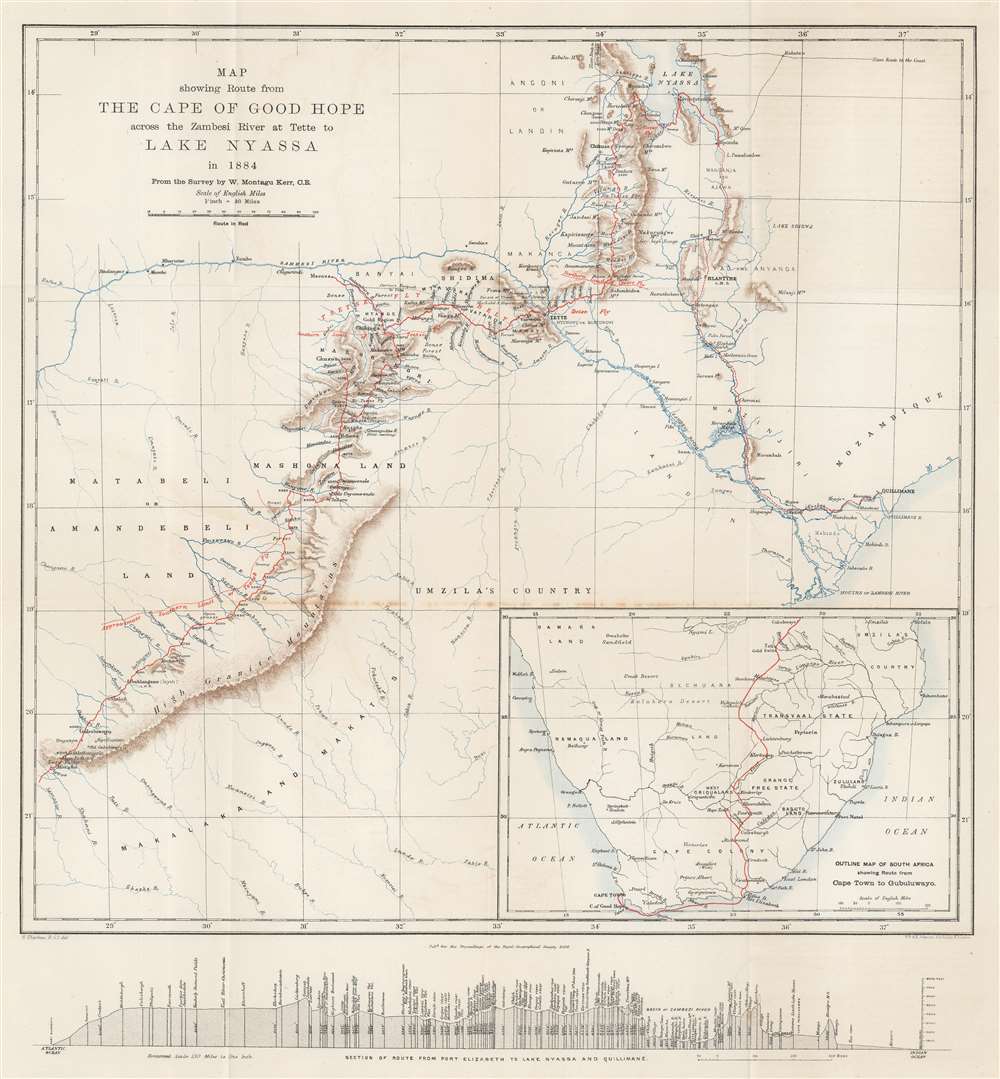 An early trek across southeastern Africa from Cape Town to Lake Malawi.
$350.00

This is an 1886 Henry Sharbau map of modern-day Zimbabwe, Mozambique, and Malawai tracing Walter Montagu Kerr's (1852 - 1888) exploration of the region. A thin red line follows Kerr's peregrinations, with towns and native villages labeled along the route. Major settlements including Gubuluwayo, Tette, Mpemba, Blantyre, and Quillimane near the mouths of the Zambezi River. The Zambezi is prominently illustrated, along with numerous smaller rivers. Marshes, mountain ranges, and other physical features are also noted, although very little detail is present in areas distant from Kerr's path. Red lettering marks tsetse fly territory - a serious danger to early explorers. An inset map in the lower right follows Kerr's route from Cape Town to Gubuluwayo. A profile of the 'section of route from Port Elizabeth to Lake Nyassa and Quillimane' is included below the bottom border.

Walter Montagu Kerr was a British explorer and world traveler. Born in Perth in 1852, Kerr attended Charterhouse School and became an engineer. He worked on the old Tay Bridge for Sir Thomas Bouch for 'some time' before leaving for California in 1873. In California he found work as the Chief Engineer at the Spring Valley Waterworks. In 1874, Kerr moved briefly to New York, before being contracted to survey mines in Mexico. After getting the mines in 'complete working order' and having made several journeys between San Francisco and Mexico for machinery, his health began to fail. This forced a visit England, but not long after he returned to New York, where he began trading on the New York Stock Exchange, where he incidentally became a popular personality. Kerr's health again declined and forced him to sell his business. This turn of events forced (or possibly allowed?) him to turn his attention to exploring Africa. He spent from autumn 1883 through sometime in 1885 traveling from Cape Town to Lake Nyassa (Lake Malawi). His health degraded once again upon his return to England from Africa, but not long after he chose to go to southern Mexico to investigate a parcel of land for a possible colonization. After returning from Mexico, Kerr wanted to mount a solo expedition to Khartoum via Cairo, but he could not get permission to enter Egypt. He decided to change his plans and entered Africa via Zanzibar, leaving England in November 1887. Unfortunately, Kerr was struck down by fever only a few days into the African interior and had to be carried out on a litter. He survived this ordeal and arrived in Cairo on a Messageries Maritimes ship in February. Cairo's climate did not help him improve, so he went to Marseilles and then Hyères, where he died on April 27th.

This map was drawn by Henry Sharbau and published by Edward Stanford in the Proceedings of the Royal Geographical Society for the Royal Geographical Society in 1886. We note an example cataloged in OCLC which is part of the collection at the British Library. We also note a cataloged example as being part of the collection at the University of Illinois at Urbana Champaign.