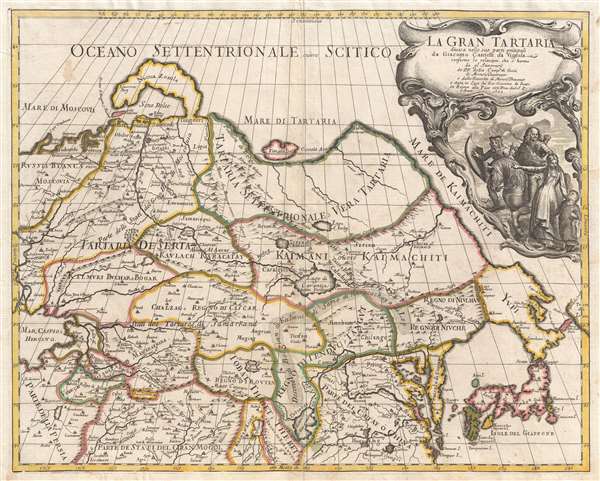 Masterfully engraved map of the Mongol homeland in Northeastern Asia.

A stunning 1693 map of northeast Asia, or as it was then known, Gran Tartaria by Giacomo Cantelli da Vignola. The map covers northeastern Asia from the Caspian Sea to the Japanese Kurile Islands, and from Nova Zembla to Tibet. The map is derived from the work of Melchisédech Thévenot and Jean-Baptiste Tavernier compiled by Giacomo de Rossi. The focus of the map is the lands to the north of China from whence came the Mongol Hordes, a subject of fascination and horror for Europeans who remembered the unstoppable 13th century invasions of Poland and Hungary. A stylized Mongol equestrian warrior, reimagined on a European model, appears prominently in the title cartouche.

Cartographically the map offers much of interest, from a dramatically elongated Korean peninsula, to a novel mapping of the Gobi Desert and the Great Wall of China. Major Chinese cities are recognizable, including Nanjing and Peking (Beijing), among others. In Tibet, Lhasa is noted. Similarly, further west, important centers of the Silk Route, including Samarkand, Kashgar, Lahore, and Bokhara are identified. Nova Zembla, in the far north, is attached to the Russian mainland, doubtless in recognition of near impenetrable ice flows in the region. Hokkaido is erroneously connected to the mainland of Asia. The Japanese Kurile Islands are mapped as enormous landmasses based upon the mistaken impression of Dutch navigators Maerten de Vries and Cornelis Jansz Coen. North of Hokkaido, the southern arms of Sakalin are recognizable, but the northeastern outcropping of Asia is entirely absent.

This map was published by Giacomo Cantelli da Vignola and engraved by Giovanni Giacomo de Rossi for publication in the 1693 edition of the Mercurio Geografico.