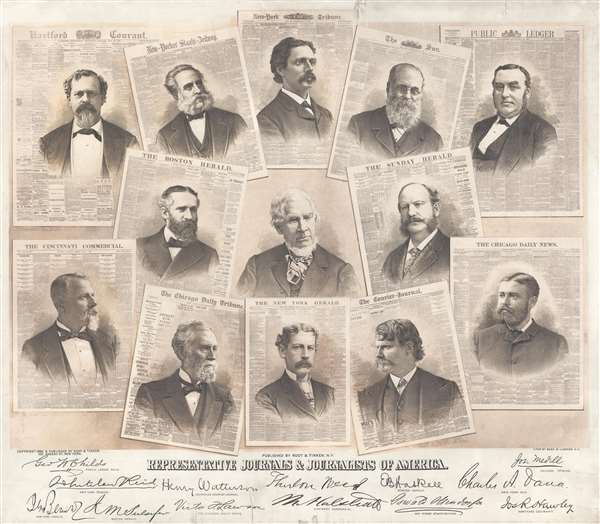 The most important newspaper publishers of the 19th century!
$1,500.00

This rare broadsheet is Gustov H. Buek's tribute to America's great newspaper men. Published by Root and Tinker in 1882, this broadside celebrates 12 of America's greatest newspaper editors and owners superimposed upon front page facimies of their newspaper. At center, a portrait of Thurlow Weed, the retired editor of the Rochester Telegraph and the Albany Evening Journal, appears in the center of the print with no representative facsimile. The newspapermen represented include

George Jones of the New York Times is conspicuously absent, but the firm did release an updated version of this broadsheet in 1885, in which Jones is included. When Root and Tinker initially issued this, in 1883, Wilbur F. Storey of the Chicago Times appeared in place of the current example's Victor F. Lawson. Some have associated this with the publication of a second edition of the broadsheet to promote the Travelers Insurance Company although there is no clear association with that organization present here.

This broadsheet is quite rare. In addition to the example exhibited at the Boston Athenaeum in 2016, we are aware of only two other examples at the Library of Congress and the Connecticut State Library.

Root and Tinker (fl. c. 1870 – c. 1896) was a New York City based publisher of trade journals, prints, broadsides and trade cards active in the later part of the 19th century. The company was founded by the owner of Root Newspaper Association and son of composer George Frederick Root, Charles Towner Root (November 9, 1849 - December 13, 1938), along with Franklin H. Tinker (1852 - 1890), and his father Henry F. Tinker (1826 - 1889). They initially issued journals for a variety of trades including the millinery industry, the upholstery trade, the pharmaceutical trade, and the clothing business, among others. Their broadsides reflected interests of their clientele, often extolling the heads of their respective industries. They often worked with Buek and Lindner lithography to engrave and print their publications. The firm reached its height in the 1880s, but with the death of Henry Tinker in 1889 and his son, Franklin Tinker, in 1890, the firm shifted focus. While Root, now a sole owner, continued to publish under the Root and Tinker imprint into the early 1890s, he had other visions. In 1889, Root and Tinker good over the retail trade journal, Dry Goods Economist. The publication was geared towards department store managers and proved highly influential in developing American merchandising theory. In the early 20th century, Root took the firm in yet another new direction with a focus on textile printing, renaming Root and Tinker as the 'Textile Publishing Company.' Shortly there after the name changed again this time to 'United Publishers.' He continued to manage the company until he retired in 1924. By this time Root had acquired great wealth, owning elegant mansions in New Jersey and Maine, as well as a grand townhouse, which still stands, at 309 West 92nd Street in Manhattan. Learn More...


Gustav H. Buek (August 20 1850 – February 8, 1927) was an American lithographer of German descent active in the latter part of the 19th century. Buek was born in Boston, Massachusetts and moved to Brooklyn, New York as an infant, where he lived the rest of his life. He apprenticed with Hatch and Company, Lithographers of New York. After his apprenticeship, in 1866, he took work with Donaldson Brothers, for whom he headed their art department. In 1881, partnering with F. H. Linder, he founded the firm of Buek and Linder with an office at 65 Warren Street, New York. Linder retired in 1884, after which Buek changed the name to G. H. Buek and Company and took on a new partner, Léon Marié. They also moved to more spacious office at 146-150 Center Street. In 1891, G. H. Buek and Company they merged with the American Lithograph Company. He is credited with being the first to introduce facsimile watercolor work to commercial lithography. Buek was a member of New York City's Salmagundi Club. At the time of his death, Buek was also the president of the Alco-Gravure Company, which printed gravure sections for twenty-seven newspapers across the United States. After suffering from poor health for several years, Buek journeyed to New Mexico with his wife and a nurse in the hope that climate would improve his condition. Unfortunately, his condition did not improve and he died in Albuquerque. Buek was also a noted art connoisseur and philanthropist. His 'remarkable collection' included paintings, china, and glassware. Buek married his wife Louise Valentine in 1873 and they were married for fifty-four years. Learn More...