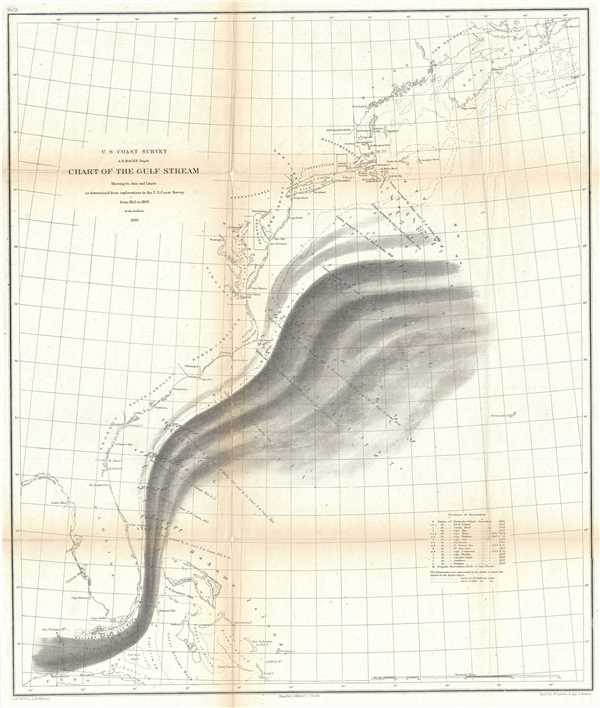 This is a beautiful 1860 U.S. Coast Survey map or chart of the Gulf Stream. The map covers the eastern coast of the United States from Florida north as far as Nova Scotia and shows the axis and limits of the Gulf Stream. Several capes, islands, bays, and coastal features are noted throughout.

First observed by Juan Ponce de Leon in 1513, the existence of the Gulf Stream was a well kept Spanish secret for many years, although undoubtedly it was known to early American merchants and whalers. It was only in 1735 that a nautical chart detailed the current, when Walter Haxton included its location and velocity in his first large-scale mariner’s chart of the Chesapeake Bay. The current was then called the ‘Northeast Current’. The chart was however largely ignored by the British until Benjamin Franklin, with the help of Timothy Folger, learned more about it with regards to whale behavior, measurement of the water's temperature and the speed of bubbles on its surface, and changes in the water's color, and gave it the name ‘Gulf Stream’. He published a chart detailing the current in 1786.

This chart is based on the surveys conducted by the U.S. Coast Survey from 1845 to 1860 under the direction of the Superintendent of the Survey of the Coast of the United States - A. D. Bache, one of the most influential American cartographers of the 19th century and also the great grandson of Benjamin Franklin. Issued for the 1860 Superintendent's Report.

Very good. Minor wear and some toning along original fold lines. Minor spotting. Minor repair near fold intersections. Professionally flattened and backed with archival tissue.
Looking for a high-resolution scan of this?