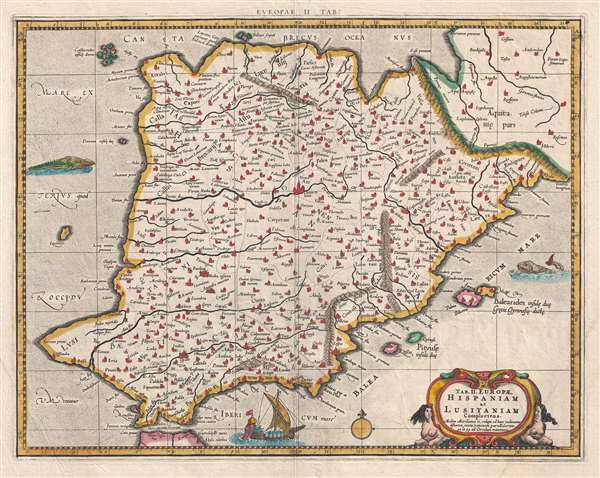 This is an attractive example of the 1730 Witstein and Smith edition of the Mercator/Hondius Ptolemaic map of Spain and Portugal. The map covers the entire Iberian Peninsula according to the 2nd century Alexandrian cartographer Claudius Ptolemy, as interpreted by Gerard Mercator.

History of the Map

Mercator first published this map in 1578, before he received his Privilege (a kind of early copyright), as part of his Tabulae Geographicae Cl: Ptolemaei. Mercators interpretation of Ptolemy's geography is distinctive as he is one of the first cartographers to do away with the tradition trapezoidal projections employed in most earlier Ptolemy maps. The maps were subsequently republished in 1584 by Mercator, and in 1605 and 1618-19 by Hondius, Mercator's successor. In 1694 the plates were sold at auction in Amsterdam and acquired by François Halma (1-653 - 1722) who reworked the plates and published new editions in 1695, 1698, and 1704. A final edition, from which this map came, was published in 1730 by R. and J. Wetstein and G. Smith. These later editions, as here, can be identified by the addition of a graticule and a few other decorative elements.