1662 Jansson and Hornius Map of the Holy Land, Israel, and Palestine 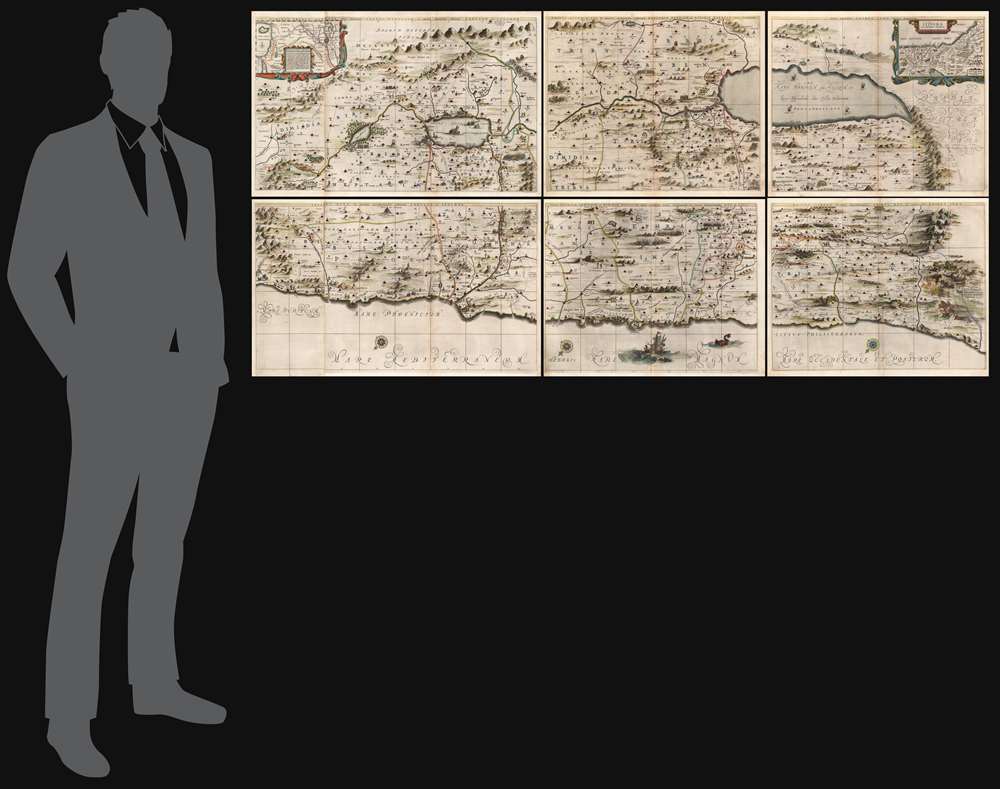 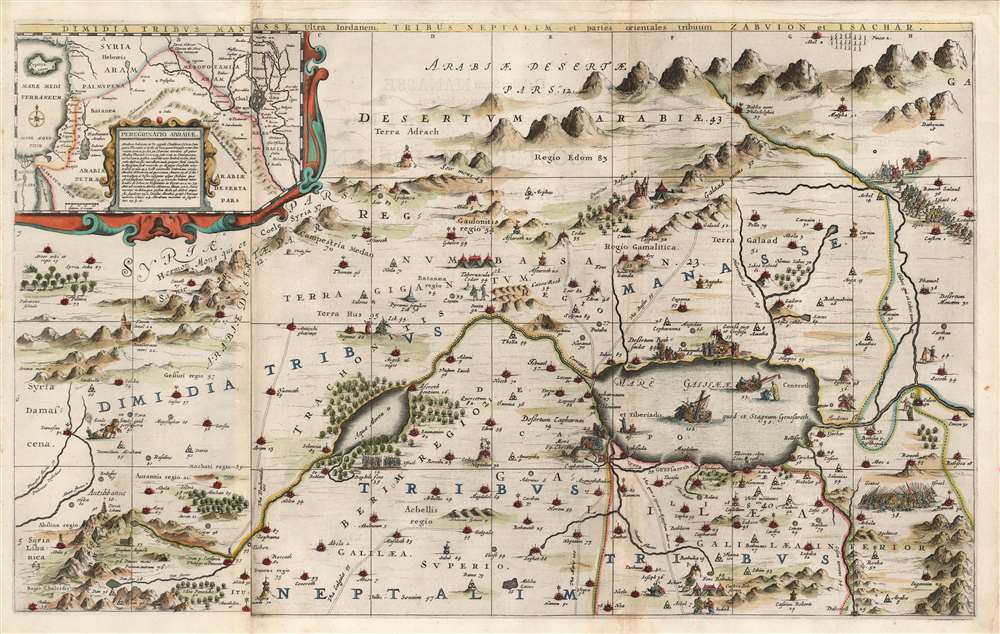 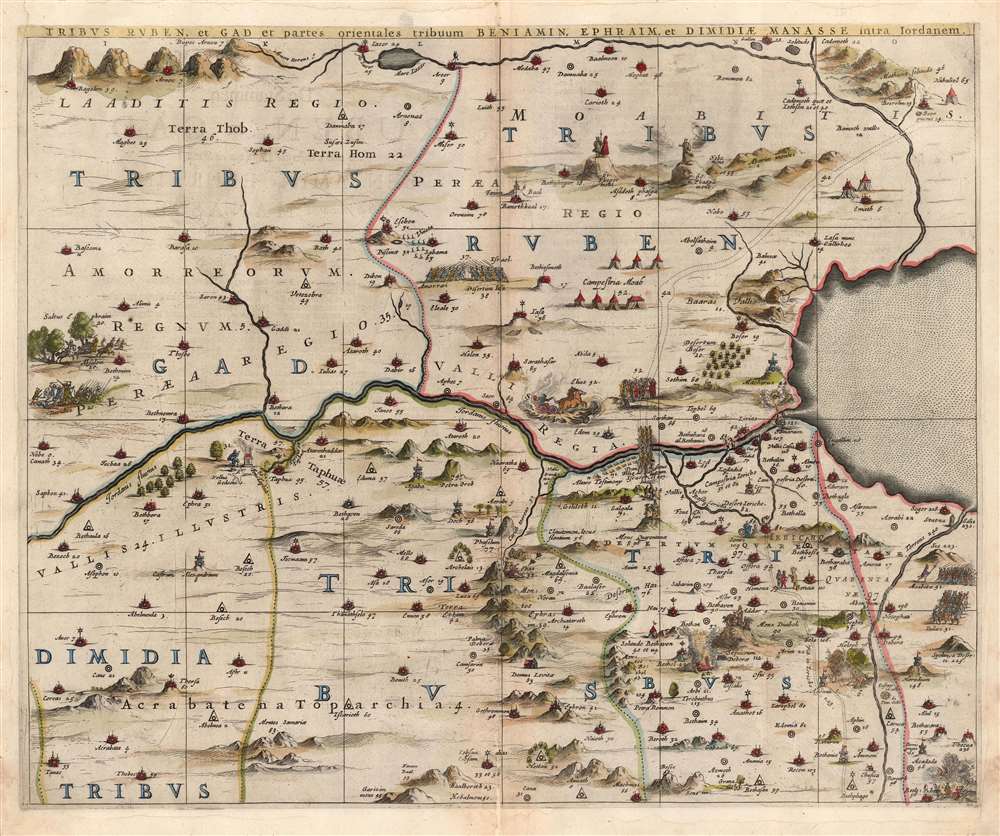 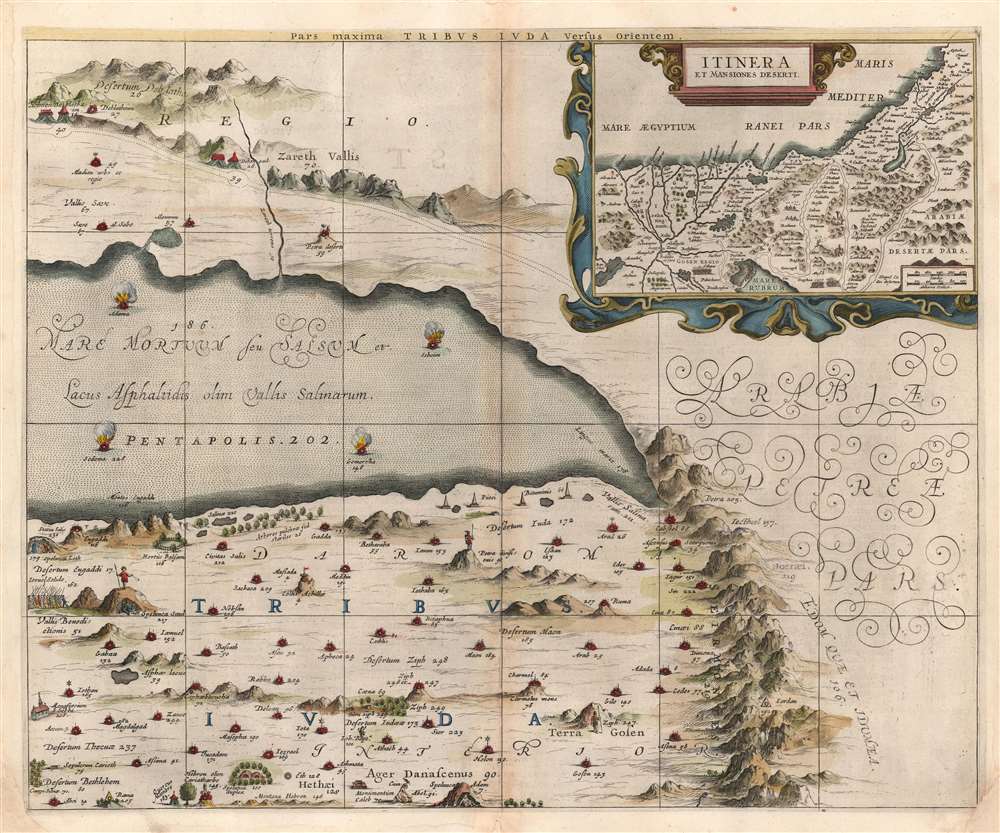 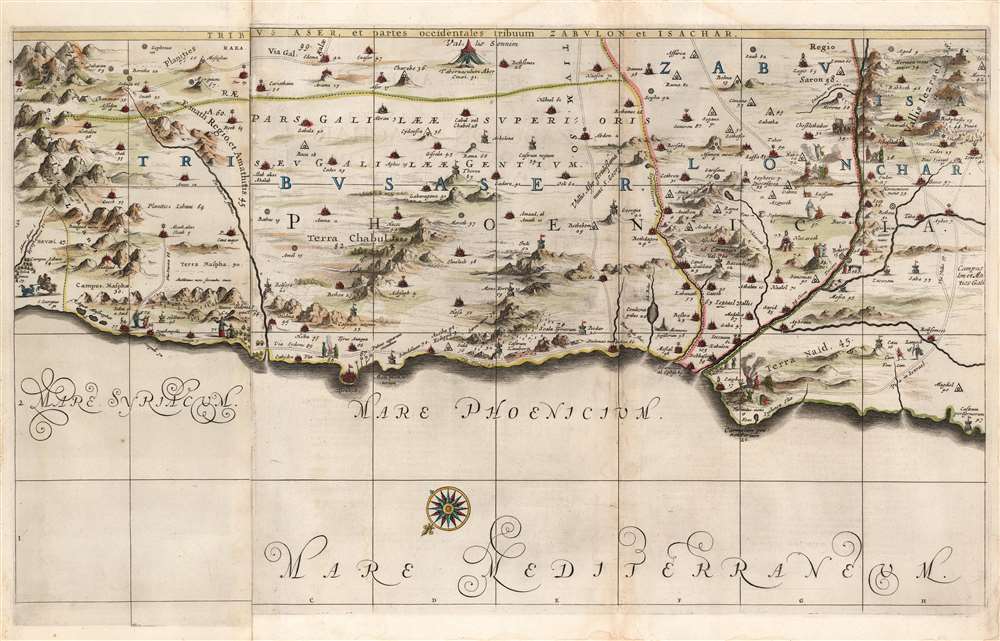 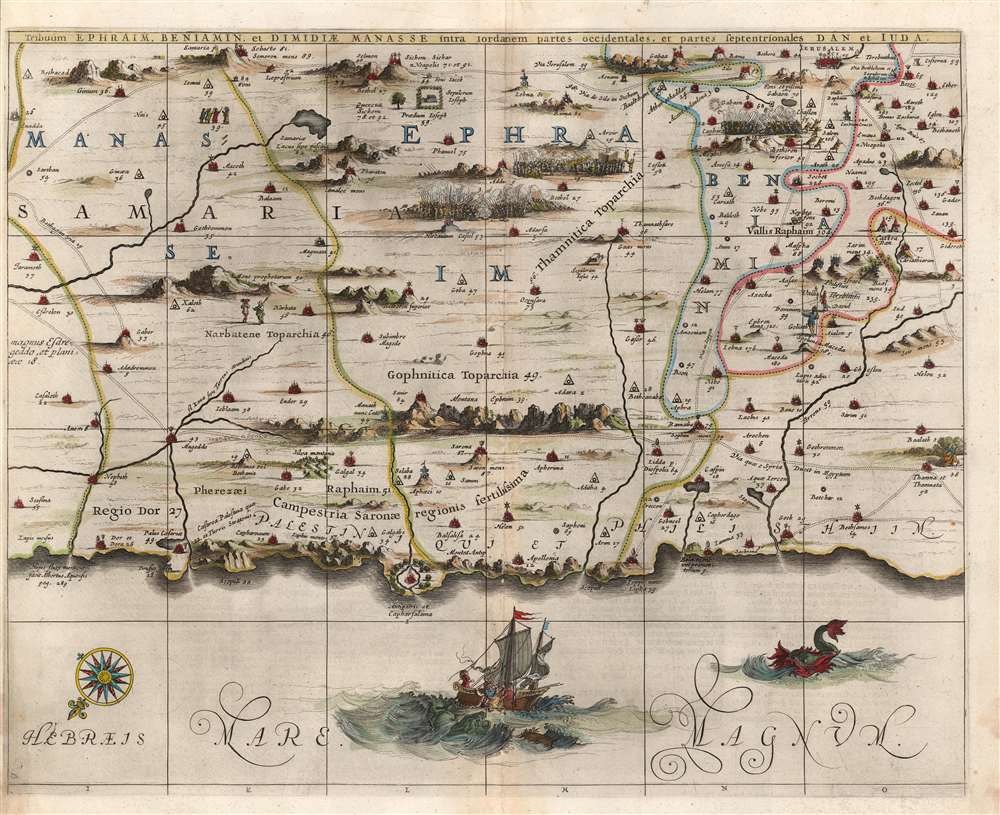 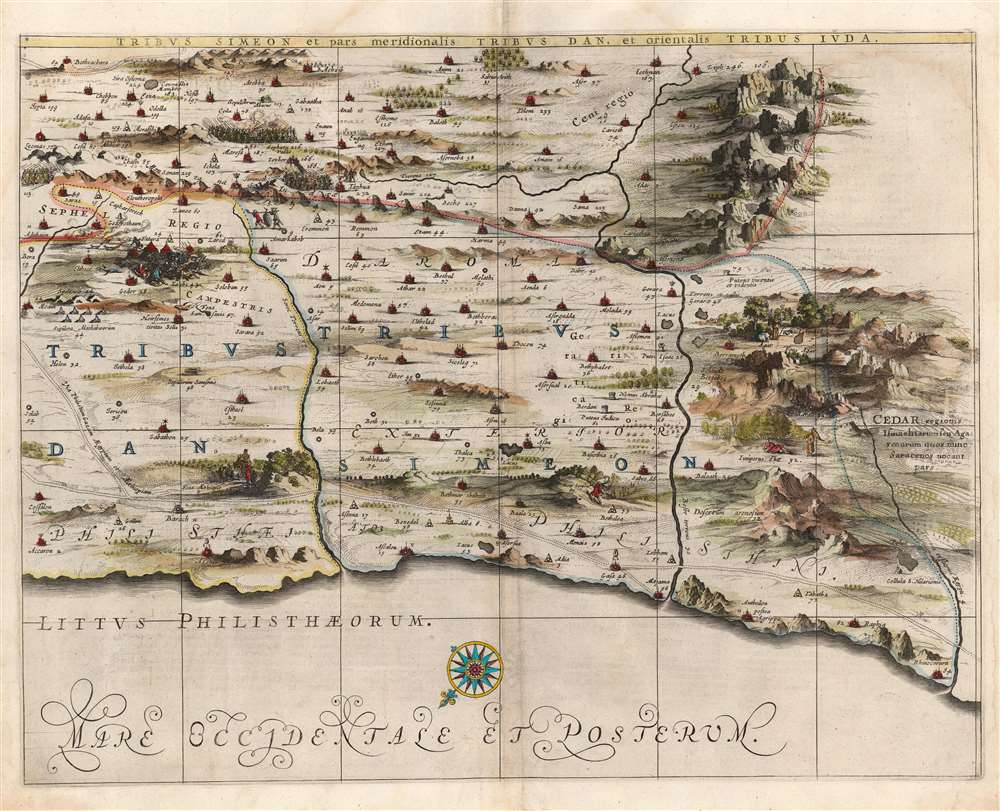 1662 Jansson and Hornius Map of the Holy Land, Israel, and Palestine

An extraordinary and rare map, this is the 1662 Johannes Jansson and Georgius Hornius six sheet map of the Holy Land in a beautifully colored example. Divided into six panels and oriented to the east, this map covers Israel or the Holy Land from the southern tip of the Dead Sea and Edom to the Golan Heights and modern-day Lebanon.

This map is an expansion and enlargement of a smaller plan of the same general area issued by Christian van Adrichem around 1590. Jansson expanded and embellished Adrichem's map to illustrate the text composed by Georgius Hornius (George Horn) for volume six of his Novus Atlas, Accuratissimia Orbis Antiqui Delineatio. Consequently, some refer to this map as the 'Hornius Map.' This map is embellished with countless vignettes and other images drawn from Biblical tradition. The smoking ruins of Sodom and Gomorra appear in the Dead Sea, Jonah is drawn being devoured by the whale, Jesus is shown being tempted by Satan (for the third time) atop a mountain, etc. Each of the tribes of Israel are named and associated with their lands. Mountains and forests are illustrated in profile.

Individually each of the maps have a title in the margins. Short descriptions of each sheet follow:

Tribus Ruben, et Gad et partes orientales tribuum Beniamin, Ephraim, et dimidiae Manasse intra Iordenem. This panel, considered by most scholars to be the first in the series, features numerous Biblical vignettes including Jesus and Satan arguing on a mountaintop, Moses looking across the Jordan, the entry point of the Hebrews into the land of Milk and Honey, and a stairway ascending to heaven. Depicts the lands controlled by Ruben and Gad, as well as the eastern lands of Benjamin, Ephraim, and part of Manasseh beyond the Jordan River. Shows the western part of the Dead Sea.

Tribuum Ephraim, Beniamin, et Dimidiae Manasse intra Iordanem partes occidentales, et partes septentrionales Dan et Iuda. Depicts the lands of Ephraim, Benjamin, and part of Manasseh beyond the Jordan river. Numerous Biblical illustrations include a dramatic scene where Jonah is being cast from a sailing ship into the open maw of the awaiting whale. Also shows the lands of Palestine and numerous armies.

Tribus Aser, et partes occidentales tribuum Zabulon et Isachar. One of the two larger panels of this series, this map shows the land of Asher and the western territories of Zebulon and Issachar. Numerous Biblical illustrations include St. George slaying the Dragon, the city of Tyre, Nazareth, and the Tabernacle of Abraham.

Dimidia Tribus Manasse Ultra Iordanem, Tribus Neptalim et partes orientales tribuum Zabulon et Isachar. The second of the two larger panels of this series, this map details the parts of Manasseh on the western shores of the Jordan River, the tribe of Naphtali, and parts of the lands of Zebulon and Issachar. Among the most attractive of the series, it depicts the Sea of Galilee (Lake Tiberius) in full with several scenes from the life of Jesus, including the 'walking on water' episode, Jesus preaching from a boat, and two others. A large inset map in the upper left quadrant, entitled Peregrinatio Abrahae shows the route followed by Abraham from Ur into Canaan.

Pars maxima Tribus Iusa Versus Orientem. The southeastern most sheet in this series, this map depicts much of the Dead Sea as well as the lands claimed by the tribe of Judah. Features the smoking ruins of Sodom, Gomorrah, Adaima, and Seboim. In the upper right quadrant, there is a large inset entitled, Itinera et Mansiones Deserti, which depicts the route taken in Exodus by the Hebrews as they fled from Egypt. Shows the parting of the Red Sea.

Tribus Simeon et pars meridionalis Tribus Dan, et orientalis Tribus Idua. Considered the last in the serious, this is an attractive mountainous panel depicting the lands of Simeon, as well as parts of Dan and Judah. Identifies the lands of the Philistines as well as timber lands rich in cedar.

All sheets exhibit slight printed scratches, caused when the copper plate was not fully cleaned, generally indicative of a very early strike.

While these panels occasionally appear on the market separately, they are rarely seen as a cohesive set and display dramatically as such. Some cartobibliographers identify this as a seven-panel set, but they are merely referring to the two enlarged panels, which each contain half of a seventh sheet. All panels contain Dutch text on verso, identifying this series as coming from the 1662 Dutch edition of Johannes Jansson's Atlas Novus, volume 6.


Georg Horn (1620 - 1670) or has he was otherwise known, Georgius Hornius, is a Germany born historian and professor active in the central part of the 17th century. Hornius spent most of his life in Holland, where the cosmopolitan atmosphere offered him greater academic freedom. As an academic Hornius was known for his unconventional approach that encouraged looking at important historical events from multiple angles. He, for example, advocated the uncommon view that Attila the Hun was actually a much loved and beneficent ruler. Hornius composed a number of historical essays but is best known for composing the text to accompany Johannes Jansson's monumental mapping of the Holy Land in 1658. This six part map is today generally referred to as the "Hornius Map" in his honor. A number of other historical maps, also associated with volume VI of Jansson's Atlas Novus. Learn More...

Very good. Each sheet exhibits original fold lines. Leftmost panels are two sheets joined at time of publication. All sheets have text on verso. All and all, a remarkable example of this collection. Minor corner repairs on some sheets. Stated size represents map as a composite, individual sheets measure 18 x 22 (smaller 4 sheets) or 18 x 29 (larger 2 sheets.) Superb hand color.