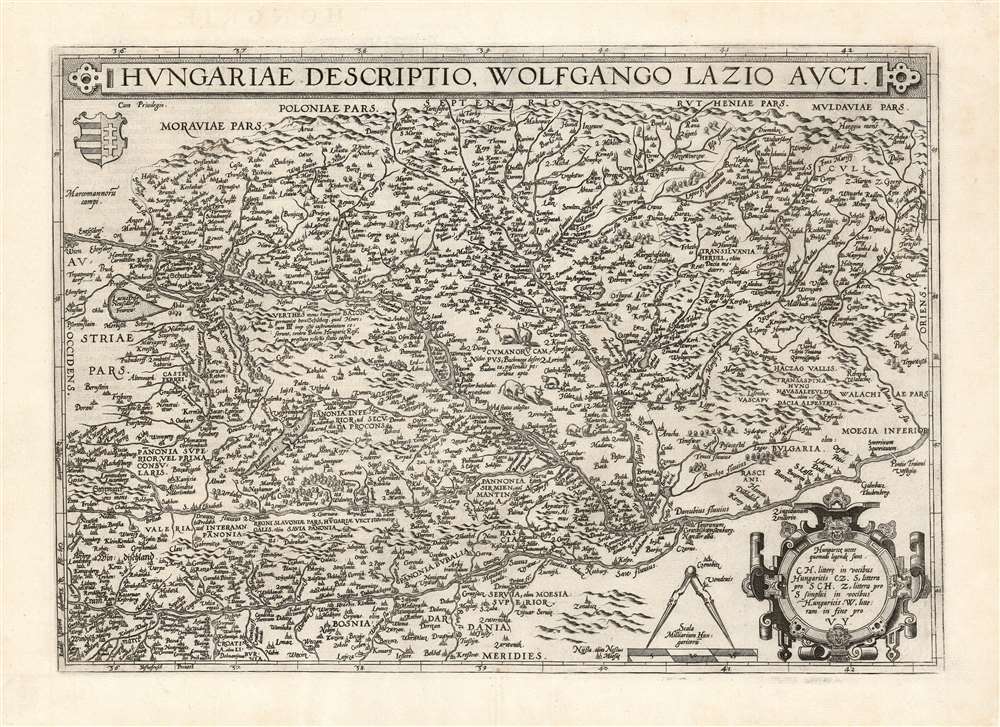 This is Abraham Ortelius' 1570 map of Hungary, the first acquirable, accurate map of that region, and the first atlas map of Hungary. The map includes parts of Austria, Slovakia and Romania, with parts of Croatia, Bosnia and Serbia in the south. The heart of the map is the River Danube, reaching from Vienna in the west to the Romanian river Olt (here in the German Alt and the Latin Aluta) Buda and Pest are shown. Belgrade appears at the confluence of the Sau and the Danube, with the antiquated German appellation Griechschweissenburg.

The map is based on Wolfgang Lazio's unacquirable 1556 Regni Hungariae Descriptio Vera, at that time the best firsthand map of the country yet produced. Ortelius was noted for his assiduous search for the best, first-hand maps he could source, and he was scrupulous in crediting his sources. Several of his maps - this one, as well as those of Austria and the Tirol - were drawn from the work of Lazio.

The mountainous terrain is depicted pictorially, as well as the forests and the wetlands southwest of the Danube. Areas northeast of the Danube are embellished with herds of cattle - perhaps suggesting that those lands, then under Turkish domination, might be a valuable prize.

This map was engraved in 1570 and was included in the first Latin editions of Ortelius' Theatrum. The plate remained in use even after Ortelius added a further map of Hungary 1579, this one derived from the 1571 work of János Zsámboky aka Johannes Sambucus. The present example conforms typographically to the 1581 French text edition, of which van den Broecke estimates there were 400 printed. It agrees with van den Broecke's fourth state, with additional stippling in lakes not evident in earlier states. Nine examples of that edition of the book are listed in OCLC. In various editions, the separate map is well represented in institutional collections.


Wolfgang Lazius (October 31, 1514 – June 19, 1565) was an Austrian humanist, cartographer, historian, and physician. He was born Wolfgang Laz in Vienna, and would be trained in medicine in the University of Vienna in 1541. He did not remain a medical doctor: he would become the official historian to Holy Roman Emperor Ferdinand I, and curated the imperial collections. His position as historian led him to travel broadly, and to write historical works; he avidly accumulated a remarkable library, occasionally stooping to theft to do so. His maps of Austria, Bavaria, Hungary, and Greece were influential, providing source material not only to Ortelius but also to the many later mapmakers who copied the Antwerp atlas publisher. Learn More...