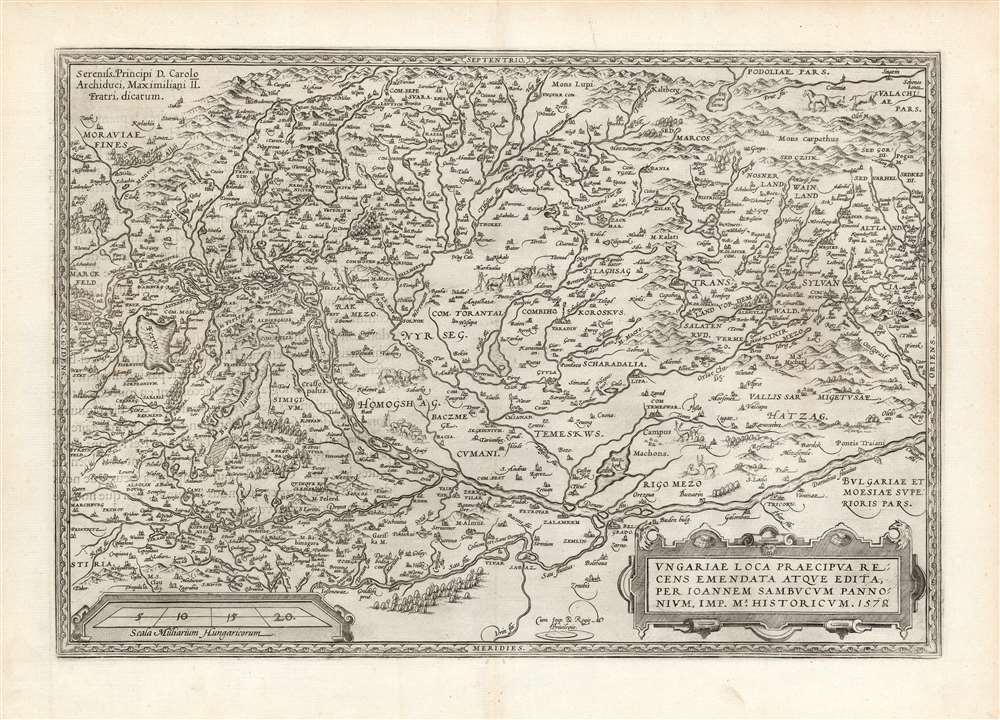 This is Ortelius' updated map of Hungary, derived from the similarly-titled and unacquirable 1571 map of János Zsámboky aka Johannes Sambucus. This new map supplemented Ortelius' earlier map of Hungary, based on the much older (1556) map of Wolfgang Lazio.

While Ortelius trusted the Lazio sufficiently to retain it in his atlas throughout its print history, he esteemed Sambucus as a clear-eyed and well-traveled scholar, and would include at least three of the Hungarian's maps in the Theatrum, including this one. There are numerous changes in toponymy; for example, the city at the confluence of the Sau and the Danube is here named Belgrado, as opposed to the antiquated German Griechschweissenburg appearing on the Lazio. The course of the Danube stretching from Vienna to modern-day Romania and Serbia; the remains of Trajan's bridge across the Danube are marked on the map.

The mountainous terrain is depicted pictorially, as well as the forests and the wetlands southwest of the Danube. The region of Timisoara north of the Danube is decorated with deer; other areas north of the Danube are embellished with flocks of sheep, and herds of cattle - perhaps suggesting that those lands, then under Turkish domination, might be a valuable prize.

This map was engraved in 1579 and first included in the 1579 Latin edition of Ortelius' Theatrum. The present example conforms typographically to the 1581 French text edition, of which van den Broecke estimates there were four hundred printed. Nine examples of that edition of the book are listed in OCLC. Twenty-five examples of the separate map, in various editions, appear institutional collections.