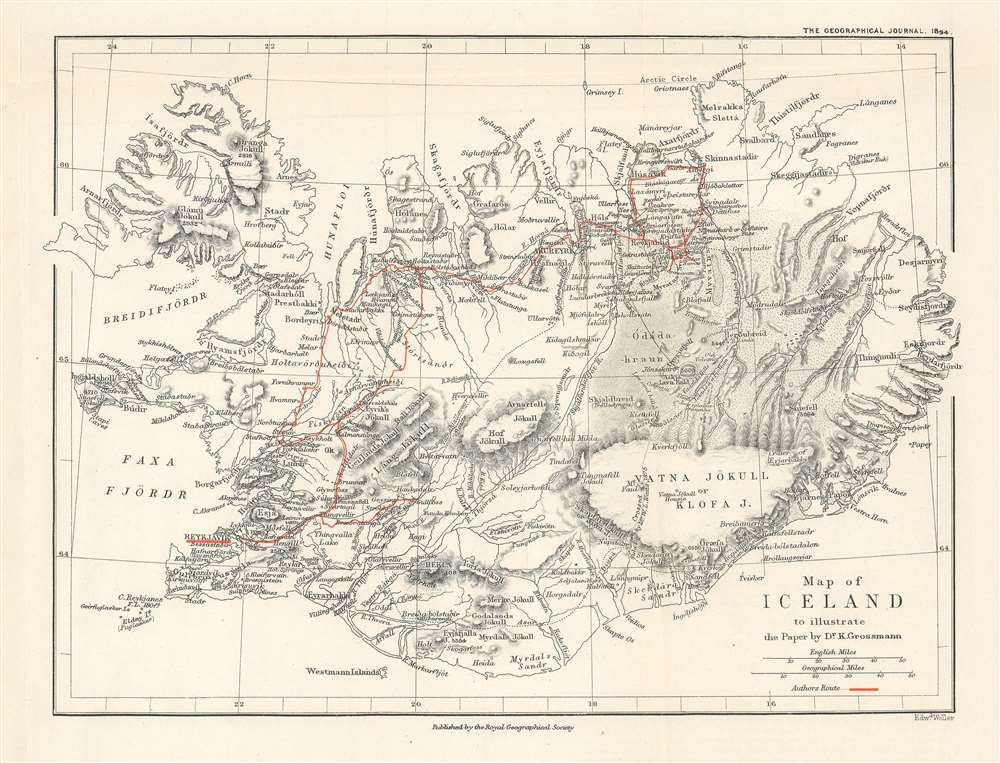 A reduction of the survey by Bjorn Gunnlaugsson - the first scientific survey of Iceland.

This is an 1894 Edward Weller map of Iceland. Created to accompany the paper given by Karl Grossmann to the Royal Geographical Society (RGS), the map depicts the entire island and is a reduction of the ground-breaking survey of Björn Gunnlaugsson. Grossmann's route is traced in red. His justification for presenting what may have appeared as 'a superfluous task' before the RGS was multiple, stating that the abundance of interesting physiographical features in Iceland is 'surprising' and that they 'are not always accessible', which led to a 'very fragmentary' understanding of Iceland. Grossmann also made a point of photographically documenting his journey, one of the first explorers to do so, stating that very few illustrations have ever been produced, with those that are most commonly reproduced in illustrated publications either being 'incorrect' or 'old time-honoured woodcuts, often copied secondhand, and mostly without acknowledgement'.

Weller's map is a reduction of Björn Gunnlaugsson's ground-breaking survey of Iceland. Gunnlaugsson had originally proposed the survey to the Danish government in 1829, but his request was denied. In 1831, the Literary Society of Iceland decided to sponsor him and they also helped him acquire the necessary instruments. Every summer f rom 1831 until 1843 Gunnlaugsson surveyed the country and spent the winters drawing the maps. Gunnlaugsson also used the coastal surveys that the Danish Navy had conducted between 1774 and 1818 as an aid. Gunnlaugsson's hand-drawn maps were sent to Copenhagen for publication under the direction of Olaf Nikolas Olsen, who proposed to publish the map on four sheets. The map is dated 1844, but probably was not finished until 1848, and was published under Olsen's name. A smaller version was published in 1849. Gunnlaugsson's survey would serve as the basis for most maps of Iceland for the next one hundred years, and new maps based on new surveys would not appear until after World War II. The original four sheet printing is virtually unobtainable and the smaller 1849 edition is very rare on the market today.

This map was created by Edward Weller and published by the Royal Geographical Society in 1894. The OCLC catalogs examples of this map as being part of the collections at the Buffalo and Erie County Public Library, the University of Chicago, and Stanford University. It is rare on the private market.


Björn Gunnlaugsson (September 25, 1788 - March 17, 1876) was an Icelandic cartographer, teacher, and mathematician. Born in Tannstaðir, Gunnlaugsson was educated by local priests and passed an exam in Reykjavík in 1808, for which he obtained a recommendation from the bishop to study at the University of Copenhagen. His education was delayed by wars, first the Gunboat War between Denmark-Norway and the United Kingdom and then the Napoleonic Wars. Gunnlaugsson finally enrolled at the University of Copenhagen in 1817 and studied theology and mathematics. During his time at university, he twice won the university's gold medal for mathematics. He returned to Iceland in 1822 when he was offered a job as a teacher of Danish, mathematics, and history at the school of Bessastaðir. Gunnlaugsson is best known for undertaking the first scientific survey of the entire island of Iceland. Sponsored by the Literary Society of Iceland, he spent the summers from 1831 until 1843 surveying the country. Gunnlaugsson's surveys served as the basis for maps of Iceland for the next one hundred years with new maps based on new surveys appearing only after World War II. For his work, Gunnlaugsson received the Knight's Cross of the Order of the Dannebrog in 1846 and the Knight's Cross of the French Légion d'honneur. When the school moved to Rekjavík in 1846, Gunnlaugsson followed. He retired in 1862. Gunnlaugsson married twice: first to Ragnheiður Bjarnadóttir, who died in 1834 and then to Guðlaug Aradóttir in 1844, and she died in 1873. Learn More...