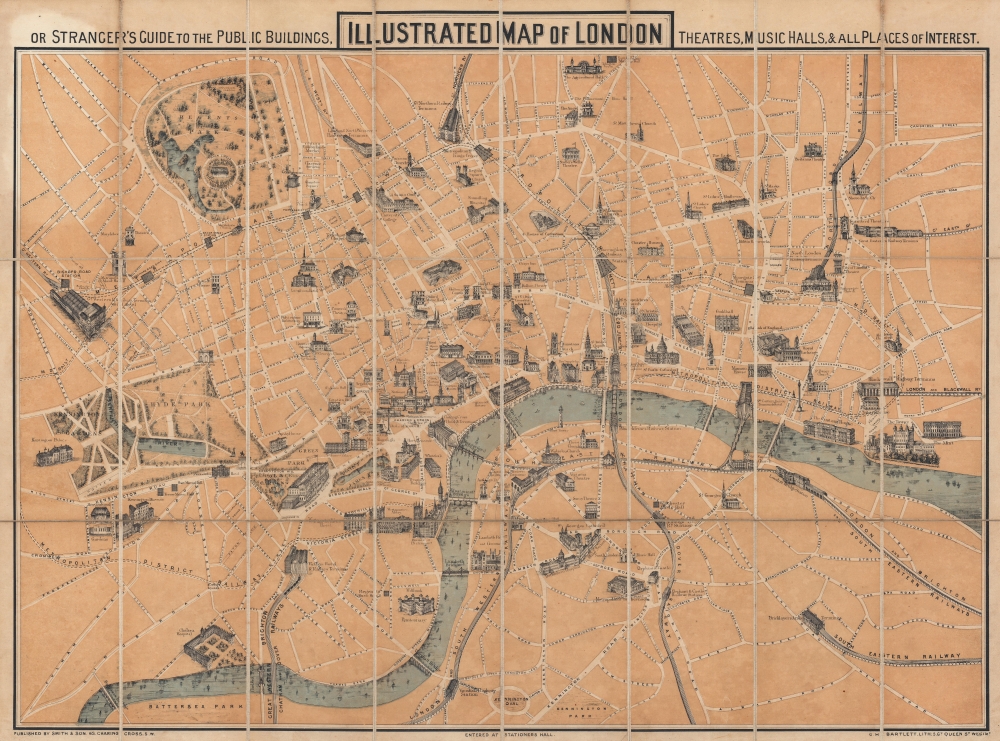 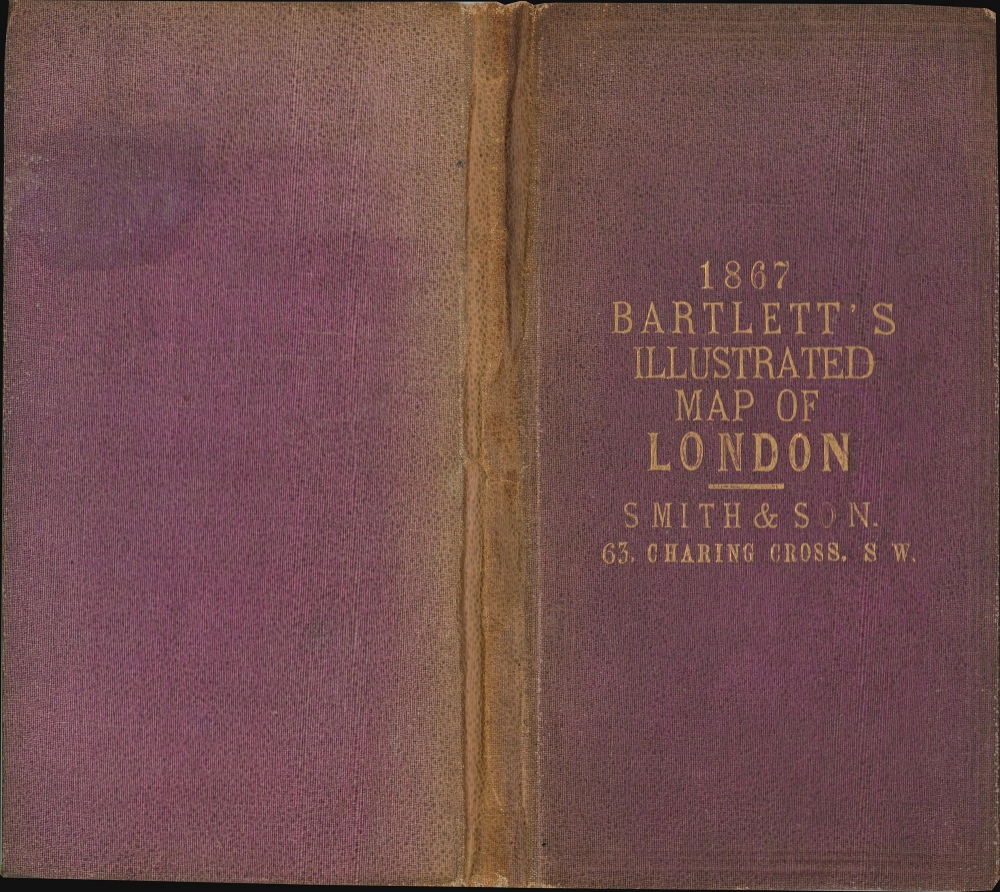 This is an 1867 George Hartnell Bartlett pictorial map of London, England, with charming profile illustrations of landmarks. The building profiles were drawn by Bartlett himself and, while not unprecedented, were pioneering in a cartographic context. Bartlett went on to make related maps of New York, Boston, Paris, and Massachusetts, but this is his first and thus most significant work.

Coverage extends from the Great Western Railway Terminus and Hotel and Kensington Palace to the Tower of London and the Mint and from the Agricultural Hall to Vauxhall Railway Station and Battersea Park. Pictorial illustrations highlight London landmarks: Buckingham Palace, Westminster Abbey, the Houses of Parliament, Nelson's Column, the National Gallery, St. Paul's Cathedral, and the British Museum, among others. London's railway stations are given the same treatment, as are numerous theatres, inns, hotels, and churches. The Thames meanders through the city's heart with sailboats and other craft plying its waters.

This map was created by G. H. Bartlett and published by Smith in 1867. Bartlett issued similar maps of New York City (1870), Boston (1871), Paris (1877), and Massachusetts (1893) - making this one of a defined series, all of which are both significant and rare. We note a single cataloged example of the present map located at the Aargauer Kantonsbibliothek in Aarau, Switzerland.

George Hartnell Bartlett (May 24, 1838 - March 26, 1923) was an English lithographer active in Westminster, London, New York City, and Boston and is best known for his architectural diagrams. Bartlett was born in Camberwell, London, England. He studied engineering. He also mastered printing and lithography, pioneering the Steam Press in London, c. 1867. In that year, he published a pictorial or 'monumental-style' map of London, somewhat pioneering at the time, which included his own illustrations of important buildings and monuments. In May 1870, he relocated to New York City. There he immediately established himself at 309 Broadway where he partnered with 'Major and Knapp' to publish a similar pictorial map of New York. By 1871, we find him in Boston, where, while visiting, he applied for a teaching position on a whim, and earning the position, remained in Boston. There in 1871 he published a similar map of that city. He also issued a somewhat related map, in 1893, illustrating the Public Libraries of Massachusetts (another edition in 1904). He remained in Boston for the remainder of his career, establishing himself as a leading member of the Boston Lithographic Artists’ Association and from 1883 - 1912 he served as Principal of the Massachusetts State Normal Art School. During this time, he published a well-regarded test on pen and ink drawing. Bartlett applied for U.S. Citizenship in 1883 and was naturalized as a U.S. Citizen on October 24, 1887. His name is sometimes misprinted in sources as 'C. H. Bartlett.' He died at his home in Arlington, Massachusetts, in 1923. Learn More...


Charles Smith (1768 - 1854) was 19th century British publisher of maps, atlases, and charts, most of which focused on England and London. Smith was appointed map seller to the Prince of Wales in 1809. His early work stylistically resembles the work of Pinkerton, Cary, and Thomson, though on a much smaller scale. From 1826 to 1854 the business traded as Charles Smith and Son. After Charles Smith's death in 1852 the it was taken over by his son William Smith, and later his grandson Guildford Smith (1838 - 1917), who continued to publish maps well into the 20th century. The younger Smith is best known for his introduction of the 'Tape Indicator Map'. This map, which came with a tape measure, enabled users to triangulate their location based coordinates given in an attached guide. The firm was taken over by George Philip in 1916. Learn More...

Very good. Dissected and mounted on linen in twenty-four (24) panels.