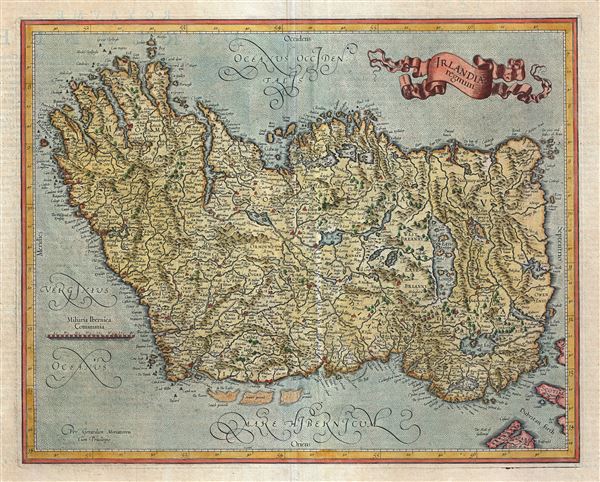 A gorgeous map of Ireland oriented to the East.

This is a beautiful 1606 map of Ireland by Gerard Mercator. Oriented to the East, the map covers the Emerald Isle in considerable detail, noting numerous towns, rivers, lakes, forests, mountains and a host of additional topographic features. Mountains and forests are beautifully rendered in profile.

This map was issued just three years after the end of the Nine Year War, a rebellion between Irish clans and their allies against British Rule. The war resulted in an English victory. The famine of Ulster, a few years earlier during the Nine Years' War, caused by the destruction of crops by the British also resulted in several deaths.

Verso features French text describing Ireland (Royaume D'Irlande) and pages 88 and 85. The map includes a title cartouche with Mercator's imprint in the bottom left quadrant. This is the first state of this map appearing in 1606. Originally appearing in 1595 atlas by Mercator, this is the first state of this map. It continued to appear in this state until 1634, after which the second state with a new title cartouche appeared in 1636 without Mercator's imprint. This map was created by Gerard Mercator and included in the 1606 edition of Atlas sive Cosmographicae.