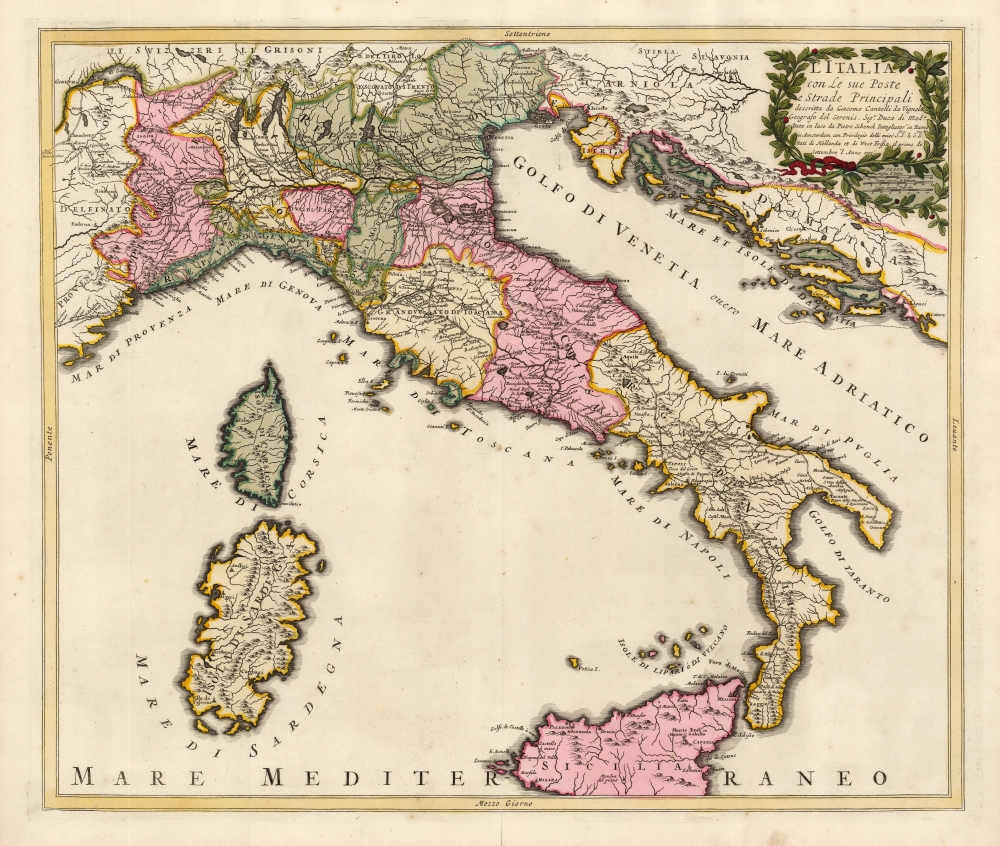 The First Major Innovation in the mapping of Italy since Magini.
$1,500.00

This is a beautiful example of a scarce, 1701 Peter Schenk map of Italy, focusing specifically on the country's post roads. It is derived from, and credits, the similarly-titled 1695 map produced by the Italian mapmaker Giacomo Cantelli da Vignola. Cantelli's map, printed in the year of that mapmaker's death, was the first significantly updated map of Italy to appear since Magini's 1608 Italia Nuova, which provided the basis for most maps of Italy issued in 17th and early 18th centuries.

This map copies the rare, Cantelli da Vignola map of the same title published in 1695 by De Rossi in Rome. Cantelli, as did all mapmakers since 1608, used Magini's Italia Nuova as a foundation (although he omitted the ubiquitous, imaginary island-mountain of M. Sardo that characterized most Italy maps of the century). He diverged more sharply from that model in the selection and placing of cities and the depiction of mountain ranges and rivers. These changes were all in the service of highlighting the system of post roads connecting Italy's major cities, and then connecting Italy to the broader network of post roads in the greater the Holy Roman Empire. Mountains are shown, as in the Magini, pictorially. However, they are placed in such a way as to complement and to some extent explain the placement of the roads, illustrating important passes and the cities straddling them.

Perhaps the occasion for this new map and its high level of specificity is hinted at in the dedication on Cantelli's map. It is dedicated to Michele de Tassis, the Marquis de Paul. The Marquis was 'Courier Maior,' the hereditary Head Postmaster in Rome (assigned to the family in 1619 by Philip III of Spain, who was also Philip II, King of Portugal, Naples, Sicily and Sardinia and Duke of Milan.)

This Schenk map has no dedication but it is curious that its title is not only in Italian, but is identical to that of its Italian source. Not only that, but the cartouche with its woven laurel border and its trio of scales is copied directly from the Cantelli. The original author, too, is credited directly in the title of the map - an honor seldom given to Magini, whose monumental map governed the mapping of Italy in the seventeenth century. The importance of Cantelli's contribution, then, cannot be overestimated. Just as Magini's map was copied throughout the 17th century, so Cantelli's was in the first part of the 18th. Not only this Schenk but also maps by Halma, Herman Moll, and Seutter faithfully copied the Cantelli. We have also seen maps on the Magini model - notably Frederic De Wit's 1680 map - in later Covens and Mortier editions amended to include the roads displayed on the Cantelli (without correcting the mountain ranges). Well into the 18th century, we see Cantelli's placement of the roads (with additions) on the Robert de Vaugondy Carte de l'Italie dans laquelle sent traceés les Routes des Postes.

This map was engraved by Peter Schenk for inclusion in that mapmaker's Atlas Contractus, as early as 1698. There are perhaps a dozen examples of this separate map in institutional collections.

Excellent. A superb example with a bold strike in lush original color. Reinforced marginal split at bottom centerfold, else fine.