1936 Petruccelli and Harrison Map of Asia and the Japanese Empire 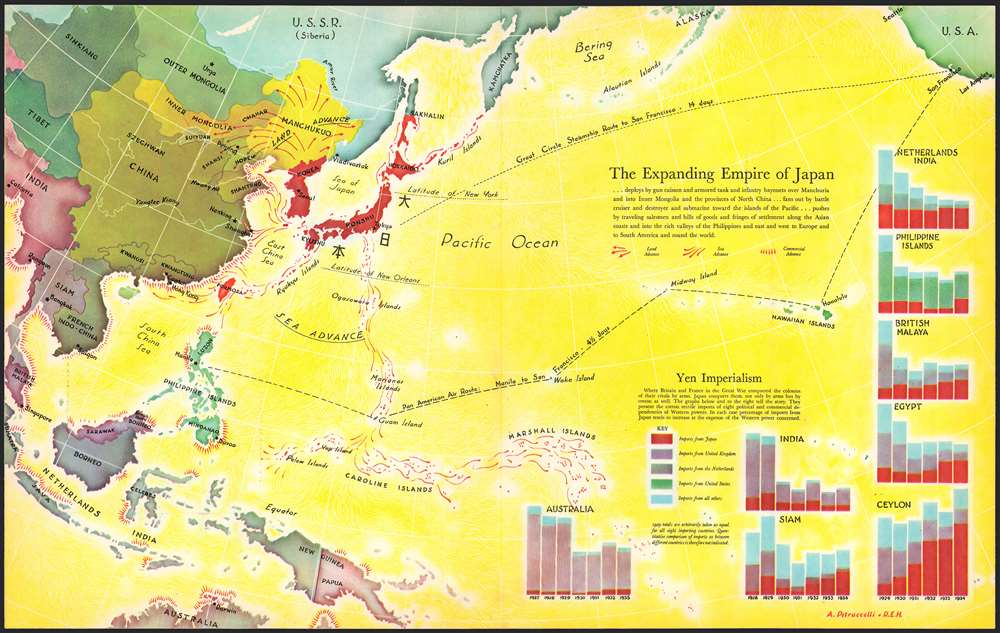 1936 Petruccelli and Harrison Map of Asia and the Japanese Empire

This is a 1936 Antonio Petruccelli and Richard Edes Harrison map of the world highlighting the advance of the Japanese Empire in the Pacific. Depicting from Calcutta to San Francisco and from Alaska to Australia, Petruccelli and Harrison paint Japan and Korea (then occupied by the Japanese) deep red. Petruccelli and Harrison then use red to indicate areas of land and sea military advance, along with areas of increased economic activity and control. The Japanese established the puppet state of Manchukuo in 1932, after invading northeastern China. Within a year of this map's publication, Imperial Japan would launch the Second Sino-Japanese War, which would expand into the Pacific War with the United States after the surprise attack on Pearl Harbor on December 7, 1941.

Red arrows emphasize Japan's advance through Manchukuo into northern China, while designs that look like ship's wakes, spread in every direction from Japan and overtake Formosa, the Marianas Islands, Caroline, Islands, and Marshall Islands, among others. No country in the region is immune from an increase in Japanese economic influence, as is evident by the starburst patterns along their coastlines. Bar graphs in the lower right corner visually present this 'yen imperialism', as it is referred to here. Petruccelli and Harrison make Japan's economic and expansionist ambitions immediately apparent, and it likely created feelings of foreboding in its viewers when it was published.

This map was created by Antonio Petruccelli and Richard Edes Harrison in 1936. It is uncatalogued in OCLC.


Richard Edes Harrison (1902 - January 5, 1994) was an American cartographer and cartoonist active in the middle part of the 20th century. Harrison is credited with redefining cartography, especially journalistic cartography, by employing spherical perspective, bold shading, and graphic design to both make maps more publicly accessible and give them an artistic dimension. Harrison was born in Baltimore and studied design at Yale, graduating in 1923, before relocating to New York City at the height of the Great Depression. He made ends meet through industrial design work, creating everything from bottles to ashtrays. His first foray into the cartographic world was a fill-in job at Fortune magazine. The editors at Fortune must have admired his work for it launched a long-standing collaboration. His work, doubtless inspired by the age of air travel, became exceptionally popular during World War II, where his unique approach and political charged subject matter illustrated the seats of war with exceptional poignancy and clarity. After the war, Harrison continued to produce maps from his base in New York City. In his spare time he was an avid ornithologist and was commonly seen in Central Park in search of rare bird sightings. Learn More...

Very good. Exhibits light wear along original centerfold.
Looking for a high-resolution scan of this?