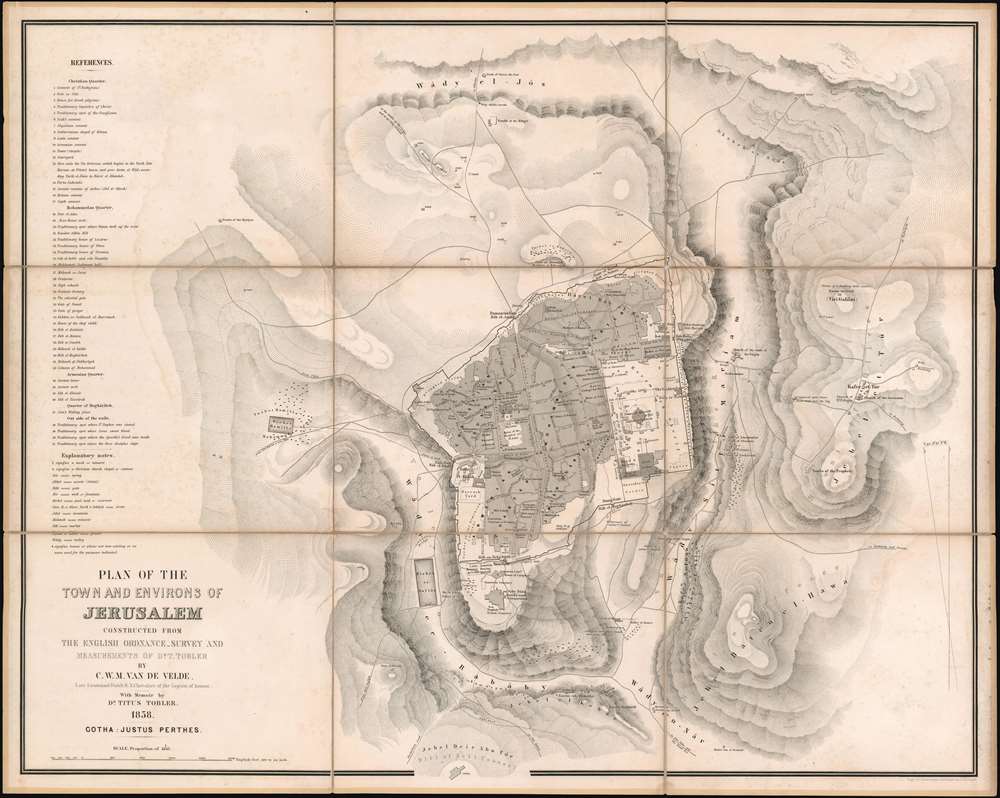 Considered to be the most accurate map of Jerusalem published at the time, this is Charles William Meredith van de Velde's 1858 city plan or map of Jerusalem and its environs. Presenting the region in exceptional detail, the map covers from the Tombs of the Martyrs to Mount of Olives and from the Tomb of Simon the Just to the Hill of Evil Counsel. Important sites are labeled throughout, with the Dome of the Rock, the Al-Aqsa Mosque, the Church of the Holy Sepulcher, and the Church of the Tomb of the Virgin among them, and a further fifty-one sites are numerically identified and correspond with an index situated along the left border. Relief is indicated by hachure.

Van de Velde's work combined survey data collected by the British Royal Engineers in 1840, Titus Tobler during his expeditions to Palestine, and measurements he executed on his own during his 1851 trip to the region. Van de Velde conducted his own additional survey work using only a 7-inch compass. Van de Velde and Titus Tobler met in Switzerland in 1855 and the pair agreed to publish a new map of Jerusalem combining their data with the aim of correcting the known flaws in the map published by the Royal Engineers in 1840-41. When Van de Velde set about drafting this piece, he incorporated raw data from the Royal Engineers' expedition, while cross-comparing it with his own measurements and personal knowledge. Yehoshua Ben-Arieh, an Israeli geographer who specializes in historical geography of the Middle East has called Van de Velde's maps 'the crowning achievement of fifty years of exploration and research in the geography of Palestine'.

This map was created by Charles William Meredith Van de Velde and published in 1858 by Justus Perthes. At the time of publication, it is accompanied by a twenty-six-page memoir by Tobler. The OCLC catalogs thirteen examples that are part of institutional collections worldwide, including the New York Public Library, Yale University, the Osher Map Library and the University of Southern Maine, and the National Library of Israel. We have found a reference suggesting only 612 examples of this map were published.


Titus Tobler (July 25, 1806 - January 21, 1877) was a Swiss Palestine and dialect researcher, writer, journalist, and doctor. Born in Stein, Tobler attended the cantonal school in Trogen before studying medicine in Zurich, Vienna, Wurzburg, and Paris. He started practicing medicine in Teufen, Switzerland in 1827. Tobler is mainly remembered for his work concerning Palestine. He first visited palestine in 1835 and published his travelogues from that rip in two volumes in 1839. He subsequently visited Palestine in 1845, 1857, and 1865. At the time, he was known as one of the preeminent connoisseurs of Palestinian literature. In 1876, Tobler published Bibliographica geographica Palaestinae, a compilation of all known and unprinted sources on Palestine and probably his greatest achievement. Aside from his work concerning Palestine, Tobler published an educational book in 1830, and was a member of the National Council from 1854 until 1857. He moved to Munich in 1871 where he devoted himself to research until his death in 1877. Learn More...