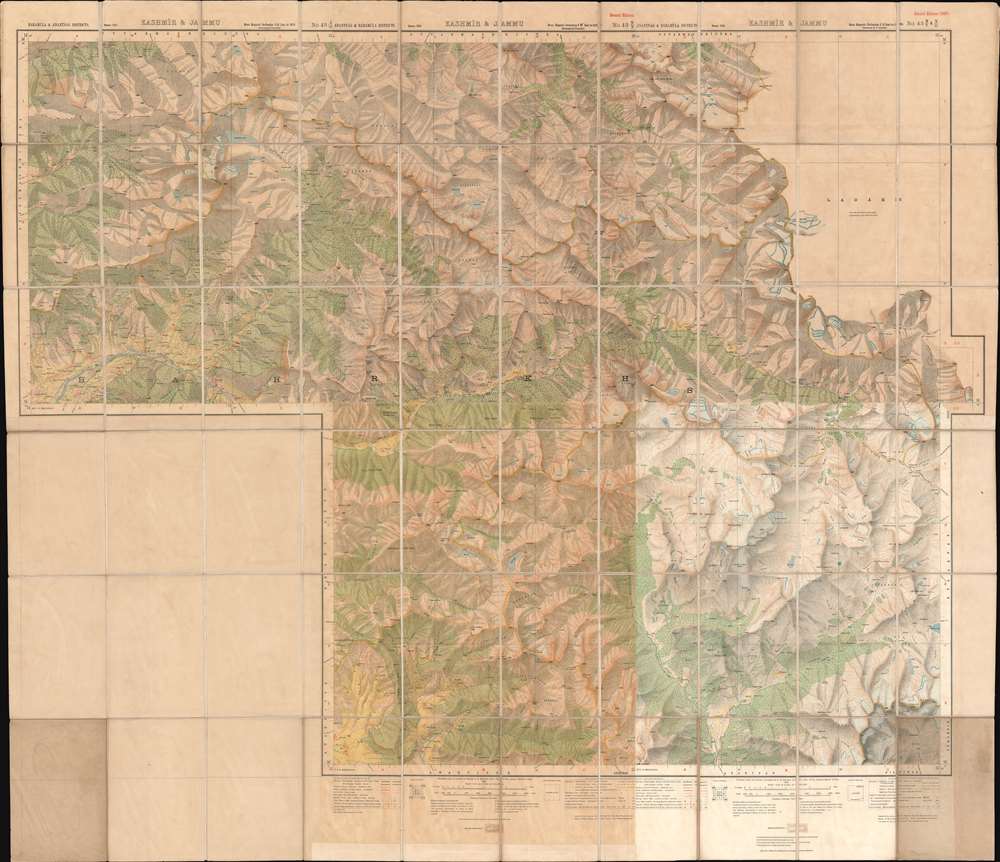 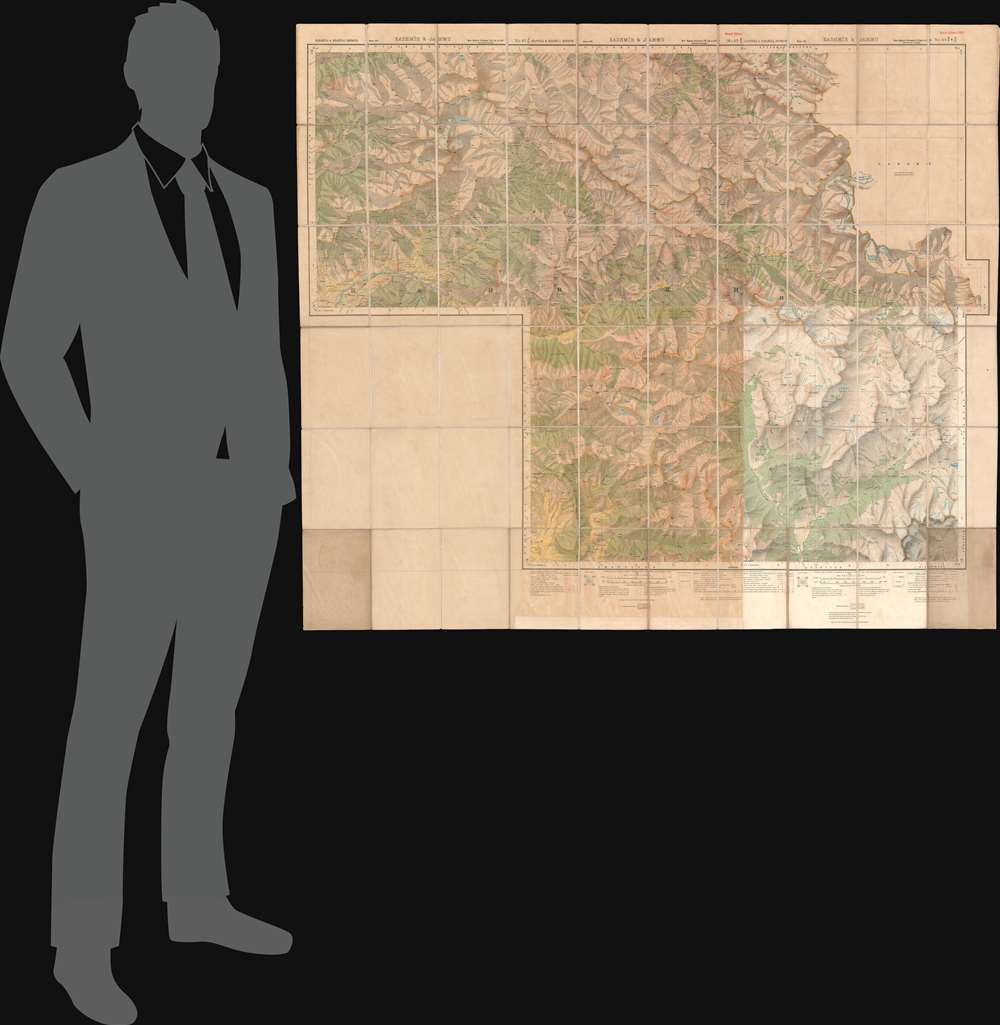 A large possibly one of a kind linen backed map of two districts in Kashmir, India.
$1,000.00

This is a large 1929 Survey of India topographic map of Anantnag and Baramula Districts in Jammu and Kashmir, India. Dissected and mounted on its original linen from what appears to be a least two separately issued sheets, the map depicts the region from Kanzdor to the Lokut Gumbur Nar and from Bajrathar to Shar and Purmandal. Mountain passes are identified, as are 'temporary huts' and other landmarks. Forests are shaded green and are labeled. Roads of varying grades are also marked, along with foot paths and mineral lines. Glaciers are shaded a blueish-white and have blue dashed lines crossing their expanse. Several keys along the bottom border explain the different notations used.

A notation along the bottom border states that the map was 'heliozincographed at the Survey of India Offices, Calcutta'. Photo-zincography and helio-zincography are two very similar reprographic processes originally made famous by their use by the British Ordnance Survey. In 1859, photo-zincography was developed relatively simultaneously by John Walter Osborne in Australia and by two soldiers at the Ordnance Survey in Southampton, Captain Alexander de Courcy Scott and Lance-Corporal Rider, who were working under the command of Colonel Henry James, who immediately took credit for the innovation. Essentially, photo-zincography is a reproductive process that employed the use of a glass photographic negative that would then be used to create a carbon positive print which was then transferred to a zinc plate. Helio-zincography, while essentially the same process, eliminated the need for the carbon positive print by placing the negative directly on the zinc plate.

This map appears to be a compilation of several different sheets produced by the Survey of India in different years, likely making it a one-of-kind bespoke piece. The latest printed date on the map is 1929, when the second edition of one of the maps was published.


Sidney Gerald Burrard (August 12, 1860 - March 16, 1943) was a British Baronet and army officer who served as the Surveyor General of India. Burrard was born on the Isle of Wright at his hereditary estate, The Mount. He studied at Lymington and then Uppingham School where he exhibited a proficiently at mathematics. From 1874 he attended Wellington College from whence his mathematical talents earned him an April 6, 1879 commission in the Royal Engineers. As part of the Royal Engineers he studied at the School of Military Engineering at Chatham. Completing his education he was dispatched to India in 1992 to join the Bengal Sappers and Miner at Roorkee. He accompanied the 1884 Zhob Valley Expedition to Baluchistan. Also in 1884, he joined the Survey of India where his worked focused on correcting triangulation errors. He severed for a time in the Red Sea before becoming Superintendent of the Trigonometrical Survey of India in 1889. In 1908 he was promoted to Surveyor General. He was honored as a Companion of the Order of the Star of India (CSI) in 1911, and promoted to Knight Commander of the Order of the Star of India (KCSI) in 1914. In 1913 he received the Victoria Medal from the Royal Geographical Society. Burrard retired from military life in 1919. He succeeded to his family Baronetcy in 1933. After his second wife died in 1938, he fell into despondency and died in 1943. Learn More...

Very good. Exhibits toning. Dissected into sixty panels and mounted on original linen.
Looking for a high-resolution scan of this?