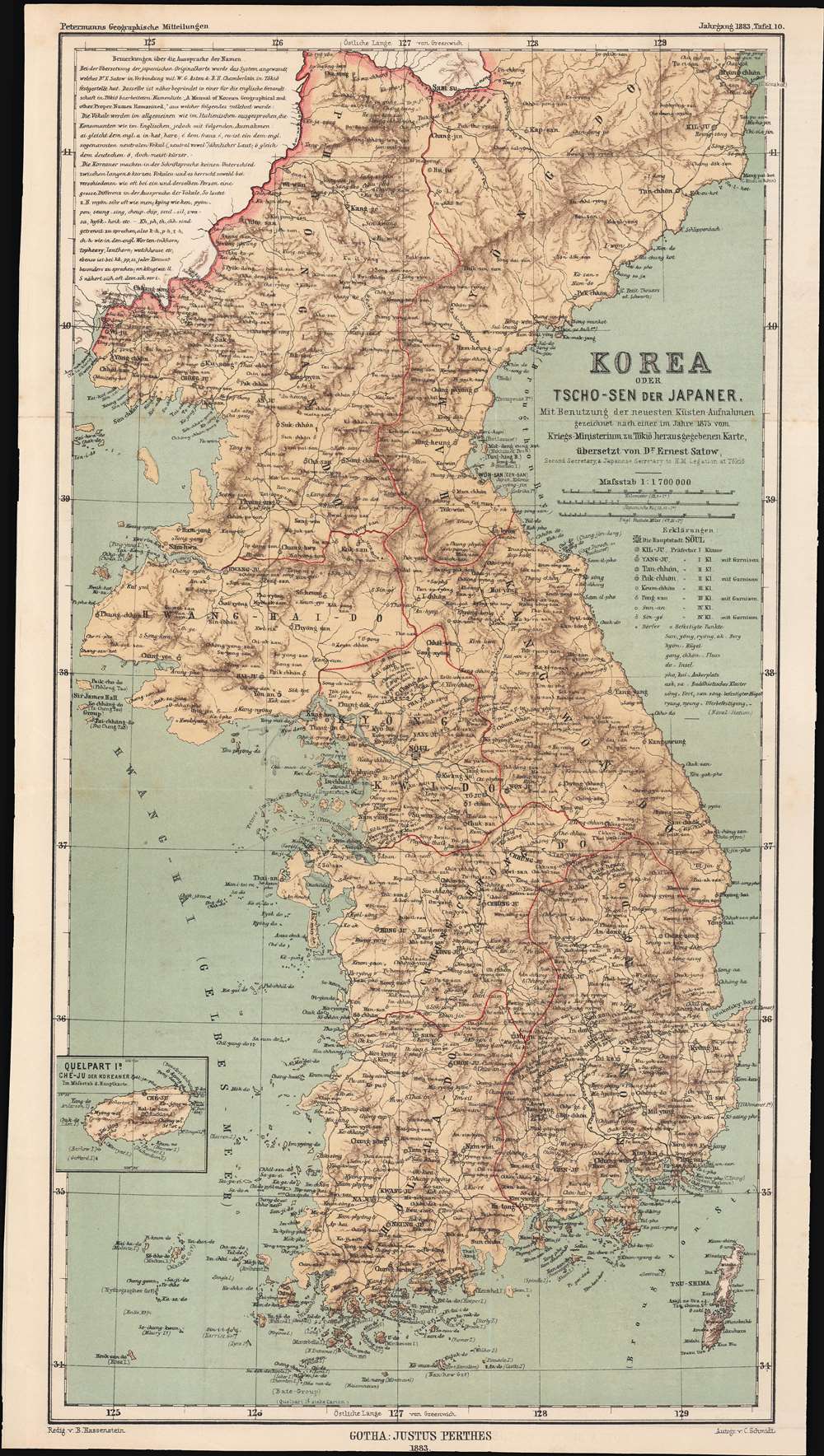 Map of Korea and blueprint for foreign control.

This is an 1883 map of the eight provinces of Chosŏn Korea, partially translated into German from an English-language map, which in turn was based on a map made by the Japanese military in 1875. The convoluted history of this map shows both the curiosity about the 'hermit kingdom' and the competing imperial interests that would be at play once Korea was forcibly opened to greater foreign influence.

The most noticeable feature of this map is its title and its use of 'Japanese Tscho-sen' (emulating the Japanese pronunciation, 'Chōsen') as Korea would not become a colony of Japan for another 27 years (informally several years earlier). It is possible that this was the result of a misunderstanding, though that is unlikely give that the German Empire established diplomatic relations with Chosŏn Korea in the same year this map was made. It seems more likely that this designation was the result of Japan's increasing influence in Korea. This rising influence followed the signing of a treaty between Japan and Korea in 1876 on terms favorable to Japan (often called the Treaty of Ganghwa or Treaty of Ganghwa Island).

The map includes the traditional eight provinces (八道) of Chosŏn, along with prefectural capitals, with a flag representing whether or not there was a garrison stationed there. Three scales are shown, in kilometers, Japanese ri, and English miles, and an inset towards bottom-left shows Jeju (Che-ju) Island. A note at top left explains the transliteration of placenames into German, which relied heavily on the translation into English done by Satow and his colleagues (see 'Publication History and Census' below). A list of terms below the legend shows the German equivalent for Korean terms often used in placenames. A subtitle indicates that the coastlines have also been updated, but it is unclear if that was between the Japanese and English edition of the map, or between the English and German edition.

Around the time of this map's production, Chosŏn Korea was thrown into a nearly impossible predicament as it tried to balance multiple competing foreign interests while protecting its own sovereignty and traditional relationship with China. The Chosŏn Dynasty had ruled Korea since 1392, with only brief interruptions due to factional disputes, rebellions, and two invasions by the Manchus in the 17th century. Aside from very close relations with China, Chosŏn generally adopted an isolationist policy, which earned it the nickname 'Hermit Kingdom' in Western-language discourse. Historians have recently challenged this perception, but it is certainly true that Chosŏn sought to strictly control influences and travelers from abroad, and was particularly strict about limiting the influence of missionaries and Christianity.

The Political Situation in Korea

In 1864, King Gojong (1851 - 1919) ascended the throne but was still an adolescent, leaving his father, the Heungseon Daewongun (흥선대원군, 興宣大院君; 1820 - 1898), to make final decisions on critical issues. The Heungseon Daewongun was a strong proponent of isolationism and internal reform (focusing on ethics in government and resolving factional disputes) in the face of increasingly strident foreign incursions. Several years later, Gojong married Myeongseong (Queen Min; 1851 - 1895), who proved to be a strong-willed and ambitious Queen with views that diverged sharply from her father-in-law. The struggle between these two wings of the Korean Court, and a later struggle between a pro-Japanese faction and Myeongseong's anti-Japanese faction, would define Korea's geopolitics until it fell under dominant Japanese influence at the end of the 19th century, in part due to Myeongseong's assassination at the hands of Japanese agents and pro-Japanese figures in the Court.

In the meantime, as this was the height of the era of gunboat diplomacy, first France (1866), then the United States (1866 and 1871), and finally Japan (1875) launched military expeditions to Korea to try to force an 'unequal treaty' on Chosŏn, while other nations contemplated similar expeditions (no doubt the original Japanese Army edition of this map was made in the context of the 1875 expedition). Where France and the U.S. failed, Japan succeeded in 1876, signing a treaty that opened the door for Japanese economic and political influence to mushroom in Korea, and weakened Korea's status as a protectorate of Qing China. This was a remarkable turnaround as Japan itself had been forced to sign similar treaties with foreign powers in preceding years, beginning with the Convention of Kanagawa with the U.S. in 1854, and would continue to do so even after 1876.

This map was published in 1883 by the journal Petermann's Geographische Mitteilungen. It was based on an 1875 map produced by the Japanese military (likely Chōsen zenzu 朝鮮全圖, made by the Imperial Japanese Army General Staff Office, 陸軍參謀局) that was translated by Ernest Satow, a British diplomat in Tokyo, along with two colleagues (Astor and Chamberlain) into English, and then translated by Petermann's Geographische Mitteilungen into German. This map is held by a small handful of institutions in Europe and North America, including the Library of Congress, but is scarce to the market.

Sir Ernest Mason Satow (June 30, 1843 – August 29, 1929) was a British scholar, diplomat, translator, and expert on Japan. He was one of the first British diplomats in Japan and developed a reputation for his excellent linguistic skills, allowing him to become a rising star in the British consular service. He spent most of his career in Asia and played an important role in negotiating the Boxer Protocol following the Boxer Uprising. He wrote and translated many works, including A Guide to Diplomatic Practice, which has been republished regularly and is still used in the training of diplomats. Learn More...