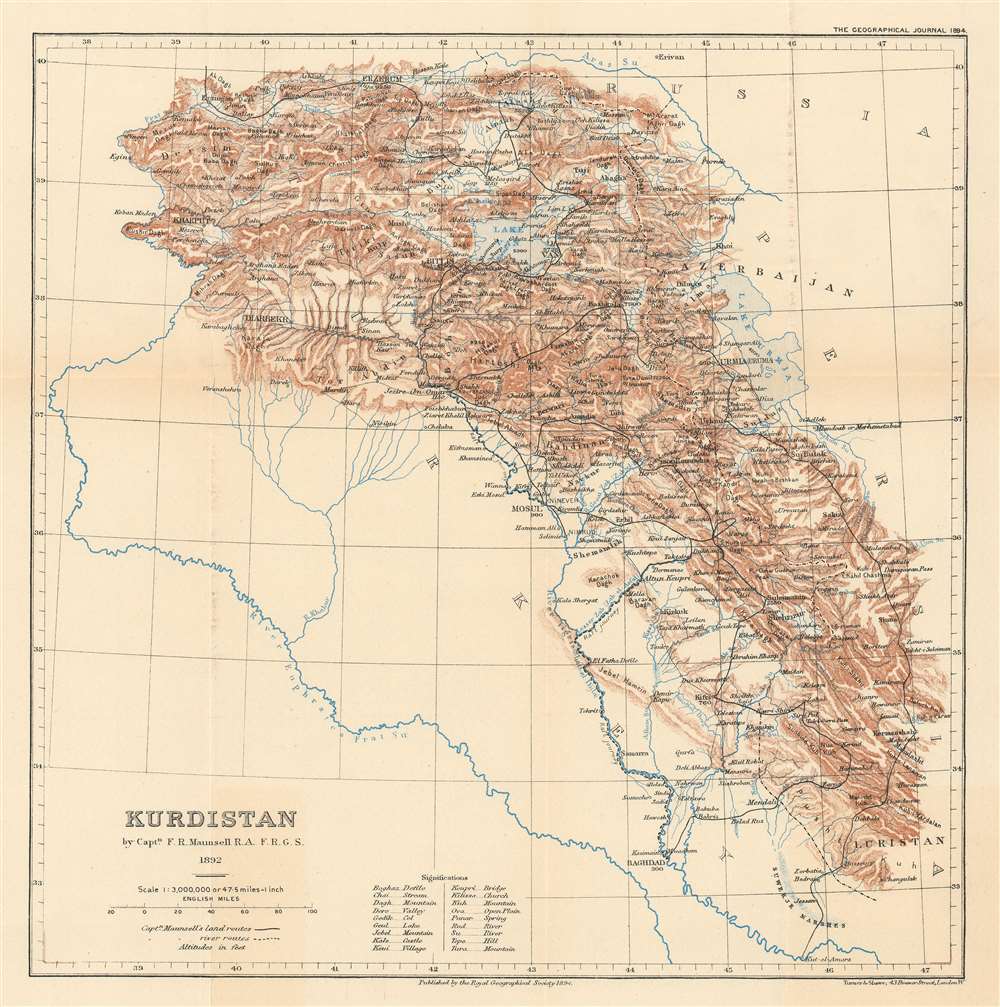 The earliest printed map specifically of Kurdistan - and a politically charged discovery resonant with modern times. Published in 1894, this map is based upon the firsthand explorations of Captain F. R. Munsell, who visited the region as British spy in the summer of 1892. The map covers what today is a hotly contested and unstable multi-national border region consisting of a mountainous region embracing parts of eastern turkey, Armenia, northern Iraq, northeastern Syria, and northwestern Iran.

Maunsell's description of Kurdistan in the July 6, 1893 edition of Nature,

Kurdistan is not an accurately defined province but may be described as the extensive district inhabited by the Kurds, embracing the region of Lake Van and the Upper Euphrates, as well as the country between the Tigris and the Persian frontier south of Lake Van. Captain Maunsell entered Kurdistan from the north passing Erzingan and Erzerum, and skirted the eastern shore of Lake Van. The watershed between the lake and the Tigris Valley is very low, but it is not easy to discover any place at which there might at some former time have been an outlet. It seems not unlikely that a lava overflow from the volcano Mount Nimrud, on the western shore of the lake, cut off the plain of Van from the Tigris and thus formed the lake Captain Maunsell descended to the Tigris, and followed that river to its mouth, making excursions into the mountainous country to the east. Only in southern Kurdistan is the population exclusively Kurdish. North of Mosul there is a considerable Christian element.

Not many years ago Kurdistan was a separate province ruled over by Kurdish beys, whose strongholds were Amadia Rawanduz, Sulaimanie, and other places. But all this is changed, and the country is now under the direct control of Turkish officials. The original Kurdish organization was tribal, and the prevailing habits of the tribes are still nomadic and pastoral, but have been modified by local conditions. Thus, the Kurds of the mountainous district north of Lake Van remain in villages all through the severe winter, the great distance being a bar to migration into a warmer plain country. In the summer, however, they leave their village dwellings for their tents, which they often pitch close to their winter home. In the rugged Dersim country the Kurds are perforce sedentary. In central and southern Kurdistan the tribes have easy access to the Mesopotamian plain, and a large number of them live in tents all the year round.

This was from Maunsell's first great voyage through Kurdistan. He would return again in 1901, by then a Colonel, compiling a more detailed study of the region and publishing additional maps.

British Mapping in Eastern Turkey and the Caucuses

Following the British intervention on behalf of the Ottoman Empire in the 1877 Russo Turkish, it became apparent that the British Empire lacked significant reconnaissance data on Eastern Turkey. Anticipating further Russian incursion into the region, which they considered to be under their sphere of influence, British intelligence sent a series of expeditions into the Eastern Anatolian borderlands, now part of Turkey, Syria, and Iraq. Although ostensibly allies, the Ottomans had a very real fear that they would be annexed by the British, who showed such tendencies in other parts of the world. Thus, intelligence operatives were sent under the guise of political attachés, ethnographers, and archeologists. Maunsell was one of these remarking individuals. Living a peripatetic existence, traveling from place to place throughout Kurdistan, armed with a Hadley 6-inch sextant, a telescope, a half chronometer, and two barometers, he produced the most meticulous map of Kurdistan yet seen - the present map. He returned to the region in the early 20th century to complete larger additional surveys.

This map is a reduction of a larger format map issued by Maunsell in 1892 for government use which has now been lost. The present example was published by the Royal Geographical Society and printed by William John Turner under the imprint of Turner and Shawe. It was published in the 1894 issue of the Geographical Journal.

Francis Richard Maunsell (February 14, 1861 - 1936) was a British diplomat, hobbyist archeologist, mapmaker, army officer, and intelligence operative active in the Middle East in the late 19th and early 20th centuries. Maunsell was born in Limerick and is of Anglo-Irish descent. He studied at Cheltenham College and attended the Royal Military Academy at Woolwich. Upon graduating, he was commissioned as a junior officer in the Royal Artillery. Having shown an academic proficiency at mapmaking, he was assigned to the mapping of Gibraltar and the adjoining lands in 1885. Impressed with his work, he was reassigned to the Ottoman Empire, where the British were eager to develop a more sophisticated reconnoiter. Posing as a political attaché he traveled throughout Mesopotamia, Kurdistan, Persia, and Luristan, collecting and compiling data on the people and country. It was not until 1892, when he was assigned surveying equipment, that he started mapping in earnest. Maunsell remained in eastern Turkey until 1905, at which time he was sent as a staff officer to Macedonia. From 1907 to 1910, he returned to London, where her served as Director of Military Intelligence. When World War I broke out in 1914, he was an advisor to MI2, the department of Military Intelligence charged with geographical intelligence on the Ottoman Empire. Maunsell's contributions as a cartographer were significant, but most were lost or destroyed in a 1930s cleansing of military documents by the British Intelligence Office. Maunsell appears to have fallen on hard times late in life and died in 1936. There are rumors that he was pushed out of MI after a showdown concerning undefined sexual impropriety in Turkey. Learn More...